The Murdoch Sun has today returned to a subject in which its hacks enjoy significant expertise, that being frightening the readers about Scary Muslims (tm). The headline tells those readers exactly what they are intended to think: “RAMADAN TRAIN WRECK Muslim train driver crashed after going without food or drink for 15 hours during Ramadan … Officials reveal the driver ran through TWO red lights at London's Paddington Station”. 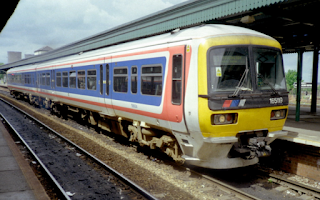 The accident involved a Class 165 diesel train, like this example seen at Didcot Parkway station

And there is the first howler: because the Murdoch mafiosi do not have anyone in the Baby Shard bunker who knows one end of the rail network from the other, they have misinterpreted “Signal SN6004 … was showing two red lights” as “ran through two red lights”. The train passed ONE signal showing a Stop aspect: a “ground signal” which shows two white lights to give a Proceed aspect, and two red ones for Stop.

The rest of the report is even worse: “Rail accident experts claimed his fast caused the rush-hour derailment that led to three days of disruption” says the Sun. The reality? The Rail Accident Investigation Branch (RAIB) concluded that it was “unable to determine whether this interruption to his sleep, and subsequent fasting, was a factor in what happened on this occasion”. No other expert is cited by the Sun.

So what did the RAIB conclude, after the empty train was derailed by trap points which did the job they were designed for? The accident demonstrated the importance of:

Drivers using the resources available to them to refresh their knowledge of the details of the track layout and signals on routes which they do not drive over regularly, and using reminders such as route diagrams to check what they are about to encounter, before setting off over the route.

Assessing the risks of using trap points to protect lines and why assessments should include an examination of the potential consequences of derailing, such as the possibility of vehicles fouling running lines or encountering other hazards.

Signallers complying with any local instructions applicable to clearing position-light signals when a route cannot be set all the way to a main signal or buffer stops.

And nothing at all about Ramadan, fasting, or Scary Muslims (tm).

All that happened was that, during an exceptionally busy time of day - the evening rush hour - planned workings in and out of London’s Paddington station had to be changed at very short notice. The driver concerned made a mistake, believing that he was cleared to take his train into Platform 1, rather than stop short at Signal SN6004. He therefore passed that signal, and the trap points derailed the train rather than allow it to continue and collide with a train that was departing from that platform.

You can see the RAIB report HERE. The Sun’s story is pure incitement, but predictably so. If only the Murdoch doggies knew what they were talking about.
Posted by Tim Fenton at 10:39

The RAIB bulletin (it isn't a full investigation) is quite interesting and a bit scary to anyone who cares, which obviously excludes The Scum. It clearly says that the signallers routinely fail to follow a laid down process and that their managers defend them. Never mind what happened next, what COULD have happened next is even more worrying. Just what degree of not following the process is allowed before the managers call enough?

There are also questions to be asked, which don't seem to have been, about driver training at FGW.

And then there are the knock on consequences caused by the damage to the overhead wire support. Who in their right mind would have positioned it in a place where the track was actually designed to derail runaway trains? This isn't the first time that simple little derailments have caused huge problems because signals or OLE equipemnt have been put in stupid places waiting to be knocked down. Without this design fault normal running would have been resumed by next morning and few passngers would have been inconvenienced.

The Daily Express approached the matter from a similar, discriminatory, angle. And some of the appalling comments below the online edition of the story were beyond belief.