UKIP - Farage Goes On The Whine

Yesterday evening, Channel 4 screened a “docu-drama” called UKIP: The First Hundred Days. This looked at the kinds of policies that Nigel “Thirsty” Farage and his fellow saloon bar propper-uppers might introduce, should they be returned with a working Parliamentary majority. Such was the scale of involuntary bowel movement within Planet Kipper that Ofcom had received 20 complaints - before broadcast. 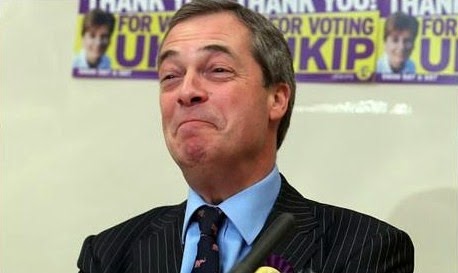 One has to wonder what Farage and his pals are shouting so loudly about: after all, the Guardian has concluded that “It won’t aid Ukip’s cause in the run up to the election, but it probably won’t make much of a dent in it either”. UKIP is a recent political phenomenon; to give an idea of what effect some of the party’s policies might have, now that they have representation at Westminster, is perfectly valid.

However, and here we encounter a significantly sized however, that has not occurred to Mr Thirsty, or indeed the Daily Mail, which detests Channel 4: “Channel 4 slammed over Ukip 'hatchet job': Farage says decision to show drama about the party winning election 'backfired' on broadcaster” thundered the headline, with the article telling “Channel 4 was last night accused of anti-democratic ‘fear-mongering’”.

How an hour long “docu-drama” can be “anti-democratic” is an interesting one, and so is Farage’s attitude: “Nigel Farage, leader of UKIP, criticised the show before it aired, but said he thought it had ‘backfired’ on Channel 4. ‘[It is] a biased, partisan depiction of the only party that Believes in Britain’, he said”. So why bang on about it? That does not seem to occur to the Mail, which has solicited a notorious rent-a-rant in support.

“So will the BBC and Channel 4 screen pre-election dramas mocking the Left? In your dreams!” sneered the headline, as James “saviour of Western civilisation” Delingpole starts off with The Casual Vacancy on the BBC, suggesting “Viewers could easily have confused it for a Labour Party political broadcast. Indeed, what I found myself watching on television on Sunday night seemed to fit the bill perfectly. At first sight, it was the glossiest, starriest and most expensive party commercial in British campaigning history”.

Del Boy is assuming those depicted in that drama were politicians representing real parties, which they were not, whining “I am clearly not alone in feeling a sense of deep disquiet about the behaviour of the state broadcasting corporation” before going in to bat for Farage “who last night was the victim of a hatchet-job so blatant it might just as well have been called: ‘Vote Farage, Get Hitler!’”.

He concedes that “It’s not that they have technically broken any rules on political broadcasting in the run-up to a General Election” before claiming “they so blatantly flout the spirit of the statutory regulations obliging our public broadcasters to be fair, balanced and politically neutral”. But only from his own biased and skewed perspective.

Farage and Delingpole are protesting too much. Why that should be I will leave to others to figure out. And good to see Chris Atkins back doing what he does best.
Posted by Tim Fenton at 11:20

It creaked, and was superficial — but I stuck it out to the end.

The narrative depended on two key conceits:
● that UKIP are serious on instant withdrawal from the EU;
● that UKIP would go for a Grande Rafle of "illegals".

It cannot be unfair to consider, even as a thin "docu-drama", the consequence of either, or both.

The first, by general consensus, would be a near-disaster for the UK economy (let alone the UK polity) — see Ben Wright in the Torygraph for the last instalment on that..

The second, which became the focus of the piece, was — if anything — underdone. The Kippers and Farage got off very lightly on this charge.

Were there to be any serious round-up of "illegals" (or even assumed "illegals") on any similar scale, the problems of the present detention system would be writ very large. How do we deport "illegals" when we have no firm evidence of whence they came, and no willingness of the nation of departure to have them back? Somalia, anyone? Syria? ISIS?

So, Mr Farage, you now have several thousand "illegals". What do you do with them? Just as well, then, we have the Lee Valley VeloPark, in imitation of the Velodrome d'Hiver in June 1942.

I really can't see what UKIP are whining about, the program was considerably more generous to them than it could have been.

The program started with the premise of UKIP winning an outright majority and then showed implementation of pretty much the only 2 policies that UKIP definitely have, namely quitting Europe, and deporting illegal immigrants. With respect to the first it only lightly touched on the possible repercussions of the so-called "Brexit" by mentioning market instability and, as I recall, only one company (Airbus) withdrawing entirely from the UK. No mention at all was made of the fate of EU citizens already living here (would they be then lumped in with the "illegal" immigrants the program later focussed on?) nor of those British citizens currently enjoying the benefits of free movement in the rest of the EU.

No mention was made on whether the Brexit would trigger fresh calls for Scottish Independence.

No mention was made on how a non-EU Britain would negotiate fishing rights, or trade tarriffs with the rest of the EU.

With regards to the latter half of the program, the program did not deign to show where the immigrants rounded up to be deported were sent or kept whilst awaiting deportation. No mention was made of the cost of employing all those ex-service personel, or of the necessary legal proceedings that would have to occur before anyone could be deported