Today, the Daily Mail’s front page headline thundered “ARCHBISHOP SAYS SORRY FOR BOMBING THE NAZIS”. Did an Archbishop ever bomb the Nazis? The historians missed that one. But no, this is a reference to the current Archbishop of Canterbury not actually apologising for anything: Justin Welby had expressed “regret and deep sorrow” over the Dresden bombings of February 1945. 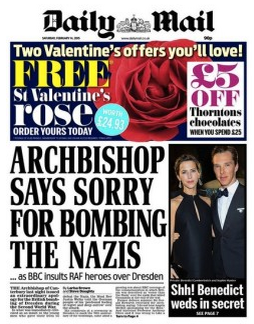 So, as he hadn’t apologised, the Mail put the boot in anyway: “The Archbishop of Canterbury last night issued an extraordinary apology for the British bombing of Dresden during the Second World War. In what was immediately criticised as an insult to the young men who gave their lives to defeat the Nazis, the Most Rev Justin Welby told the German people of his ‘profound feeling of regret and deep sorrow’ over the attack”.

And it was, by definition, the BBC’s fault: “His comments at a ceremony in Dresden to mark the 70th anniversary of the bombings came amid a growing row about BBC coverage of the commemoration in which Britain was described as ‘worse than the Nazis’ over the raids that killed thousands at the end of the war”. Then Simon “Enoch was right” Heffer was wheeled out to tell that it was all the fault of The Left.

So far, so predictable, but once again, we find the Daily Mail banging on about who was cheering on whom, while managing to miss the past conduct not only of the paper, but the family of its legendarily foul mouthed editor Paul Dacre. Dacre personally ordered a campaign of vilification against the memory of Ralph Miliband in order to get at Mil The Younger, but Miliband père volunteered to fight when he did not have to.

As a foreign national, Ralph Miliband could have sat out the war in England. He joined up. Dacre’s father turned 18 in 1943, but sheltered behind the protection of a reserved occupation, although “showbusiness reporter” was coming it a little. Many journalists volunteered to report from the battlefield, and some died.  Dacre’s familial hypocrisy is matched only by the deeply unsavoury past of his paper.

While the Mail rants “But he made no reference to the 55,573 British aircrew killed in the struggle to overthrow Hitler, nor to the German bombing of London and Coventry”, Dacre misses the minor point that the Mail spent much of the 1930s cheering Hitler on, telling its readers how wonderful the new régime in Germany was, and running a series of stories passing severely adverse comment on Jewish refugees being allowed in to Britain.

The whole campaign might not have been so bad if so much of the popular press had desisted from not merely appeasement, but outright encouragement. The Daily Mail played its distasteful part in building up Hitler and his mystique. Meanwhile, the BBC has already devoted many hours of programming to the Coventry bombings, and the Blitz. The Dresden raids have always been controversial, and merit commemoration. That is all.

If anyone should be apologising, it’s Dacre, whose paper said “Hurrah for the blackshirts” and whose father really was The Man Who Hated Britain. What a stinking hypocrite.
Posted by Tim Fenton at 17:25

Justin Welby is perfectly qualified to make these remarks because of his connection to Coventry Cathedral(from Wiki) :-

Coventry Cathedral has a long and distinguished history of reconciliation stretching back to the late 40's when Coventry and Dresden where twinned.

Once again Mail shows itself in its true light .

The bloke who said the thing about Britain being worse than the Nazis was an English POW who (like Kurt Vonnegut) was in Dresden at the time of the attack; he was interviewed on Breakfast and gave a very graphic description of what it was like - he also specifically excluded from blame the young men who did the actual bombing.

What can one do when confronted by such rank hypocrisy but paraphrase that famous DM headline from their fascist admiring days in the 30s 'Hurrah For The... Archbishop!'