If you want to know what Rupert Murdoch is thinking, the saying goes, read a Sun editorial. The Times, on the other hand, or the Times Of London as it likes to pretentiously style itself, would like readers to think that it is a publication of independent mind. Sadly, not only is the Times not independent of Creepy Uncle Rupe’s demands, its leader writers have long ago descended into using the language of the playground. 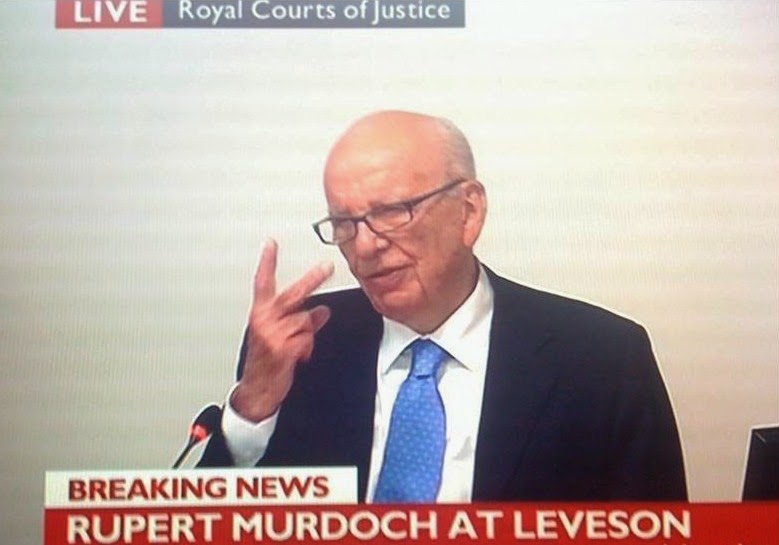 That's what I think of youse bladdy BBC, ya bladdy Pommie drongoes!

So it was no surprise to see today’s Times editorial, “Tame the gorilla” (the Sun equivalent today was “BBC cop-out”), describing the hated Beeb in the style of the (very) old 600lb gorilla jokes (Q: what do you call a 600lb gorilla with a machine gun? A: Sir, or Q: where does a 600lb gorilla sit when it’s watching the TV? A: where it bloody well likes), the kind of language the Times of old would never have considered using.

Yes, today’s target for both papers, by the most miraculous of coincidences, is the BBC, because the Department of Culture, Media and Sport Select Committee has been looking into the way the Corporation is run and financed. Its recommendations include ending the licence fee, but raising money via a levy, which, some may argue, is the same, er, fluid in a differently labelled bottle. Either way, Rupe’s troops are not happy bunnies.

Take the Times’ sniffy drivel: “The BBC is a broadcaster [nothing gets past them]. It was not conceived as a one-stop information ziggurat [slipping in big words does not necessarily improve the writing] and has not been redefined as such by those who fund it [what does this mean?]. It has no remit as a publisher [think you’ll find it does] yet it throws money at a sprawling multi-platform news organisation [subjective and pejorative].”

The Sun goes further: “WHAT a pathetic whitewash the ‘Future of the BBC’ report by MPs turned out to be … What madness drove them to conclude that the best alternative to the outdated licence fee is a TV ‘poll tax’ compulsory for every household … And why did they not tackle the one central issue damaging trust in the BBC … the blatant pro-labour bias that skews much of its output?”

Yes, why? OK then, why, O Sun worthies? “Presumably because half the members of the Culture, Media and Sport committee embrace it”. Really? So where is the forcefully argued minority report from the other half, especially given Tories like Philip Davies sit on that committee. There has been none, and so it has to be assumed that there was unanimity on the content of the report - unlike into the Murdochs.

But what the Sun and Times have confirmed today is not just that the larger part of the Fourth Estate detests the presence of the BBC, and that they are more than prepared to call it out for alleged political bias - the Mail has also had a go at the Corporation today - but that the Times cannot be claimed to be free of Murdoch’s controlling influence on its content. That is the real 600lb gorilla in this particular room.

And it’s already crapping all over the Times’ reputation for independent journalism.
Posted by Tim Fenton at 17:39

The 'madness' that drove the committee to recommend a household tax in replacement to the licence fee is explained through the evidence supplied in the report. If the Murdoch hacks had bothered to read it rather than just listen to rants from their fellow Murdochites then they might understand why the committee gave this as an option.

Happy to be living in Canada now, a market which Murdoch has, happily, overlooked. However, our own public broadcaster, the CBC, is under constant attack for similar alleged left-wing bias. Sadly, most of the attackers are in the government.

I can understand why Rupe thinks Sun readers can be brainwashed with his views but does he really think Times readers are stupid enough to not realise the link with Sky?