Nick Robinson - A Question Of Attribution

As the ruckus over Mil The Younger’s alleged “Milly Dowler Moment” rumbles on, one figure in the drama - and a figure who should not be allowing himself to become part of the story - is the BBC’s Political Editor Nick Robinson. Being upfront is part of Robinson’s modus operandi, and he has managed to unsettle many politicians over the years because of it. But spin should be left to them, not him. 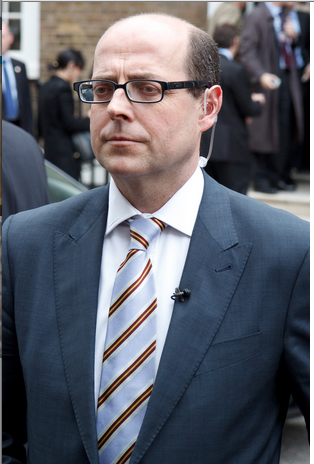 And that is a pity, because it detracts from Robinson’s undoubted talent for picking up on developing stories before the rest of the press pack. Take, for instance, the broader issue of tax avoidance, where he had seen the Labour line being firmed up not at this week’s Prime Minister’s Questions (PMQs), but last week. While most of the hacks and pundits were telling that Young Dave had won easily, Robinson had the real story. 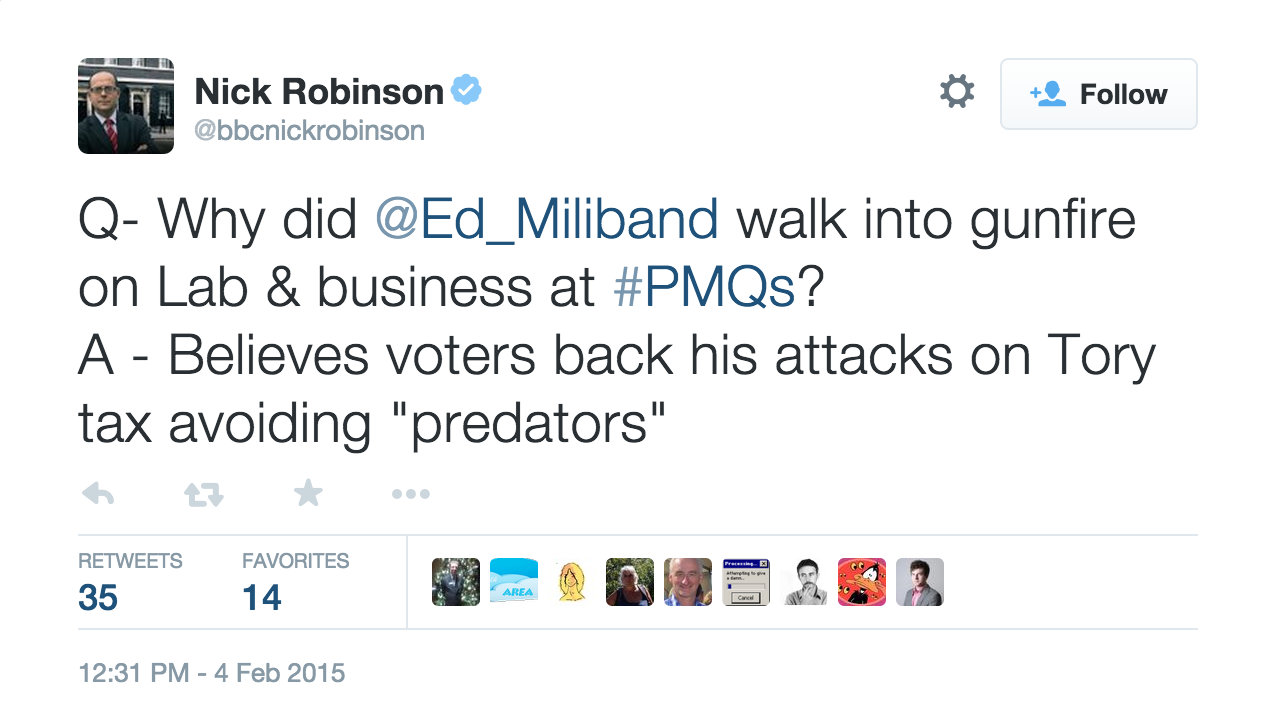 “Q- Why did [Ed Miliband] walk into gunfire on Labour and Business at PMQs? A- Believes voters back his attacks on Tory tax avoiding ‘predators’”. The rest of the media was too busy peddling its “Isn’t Ed rubbish? Isn’t Dave wonderful?” meme to bother itself. And tax avoidance was indeed the story. But then came the suggestion that Robinson had had something to do with the “weaponise the NHS” claim. 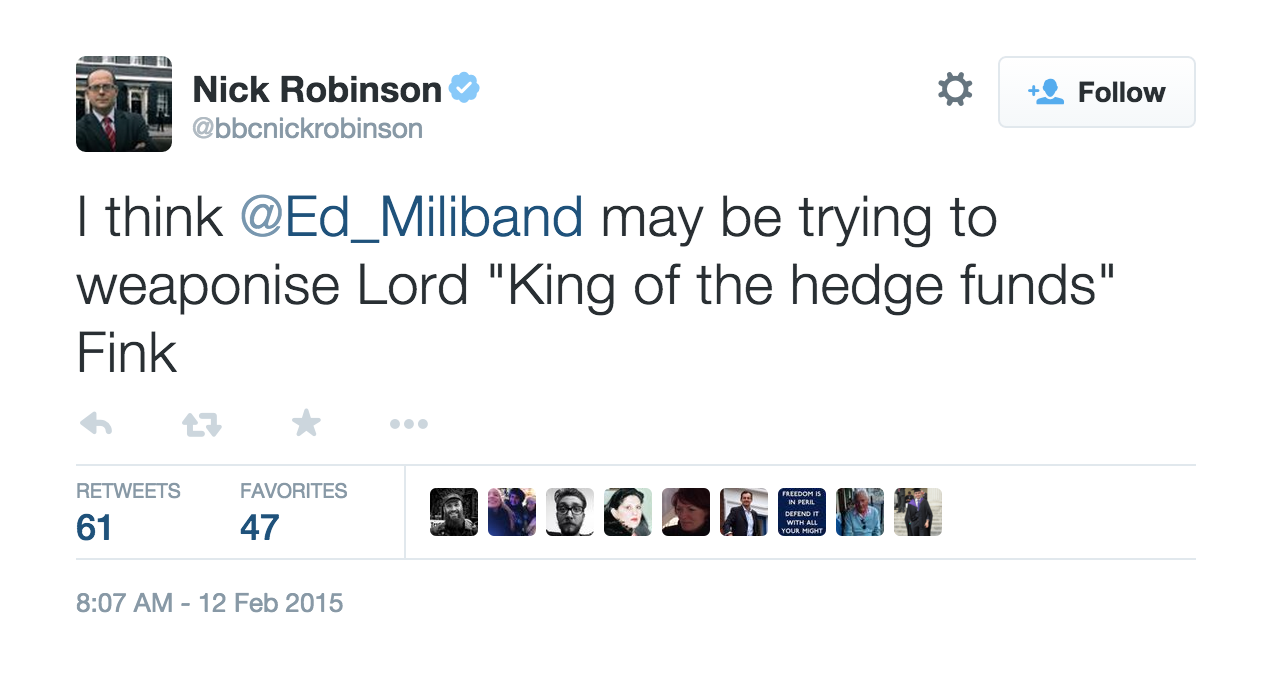 He certainly didn’t do anything to damp that one down by Tweeting “I think [Ed Miliband might be trying to weaponise Lord ‘King of the hedge funds’ Fink”. And then came the “Dowler moment”. What part did he have in that? Did a Miliband aide make that actual comparison? All of a sudden, Nick’s candour was, well, nicked. 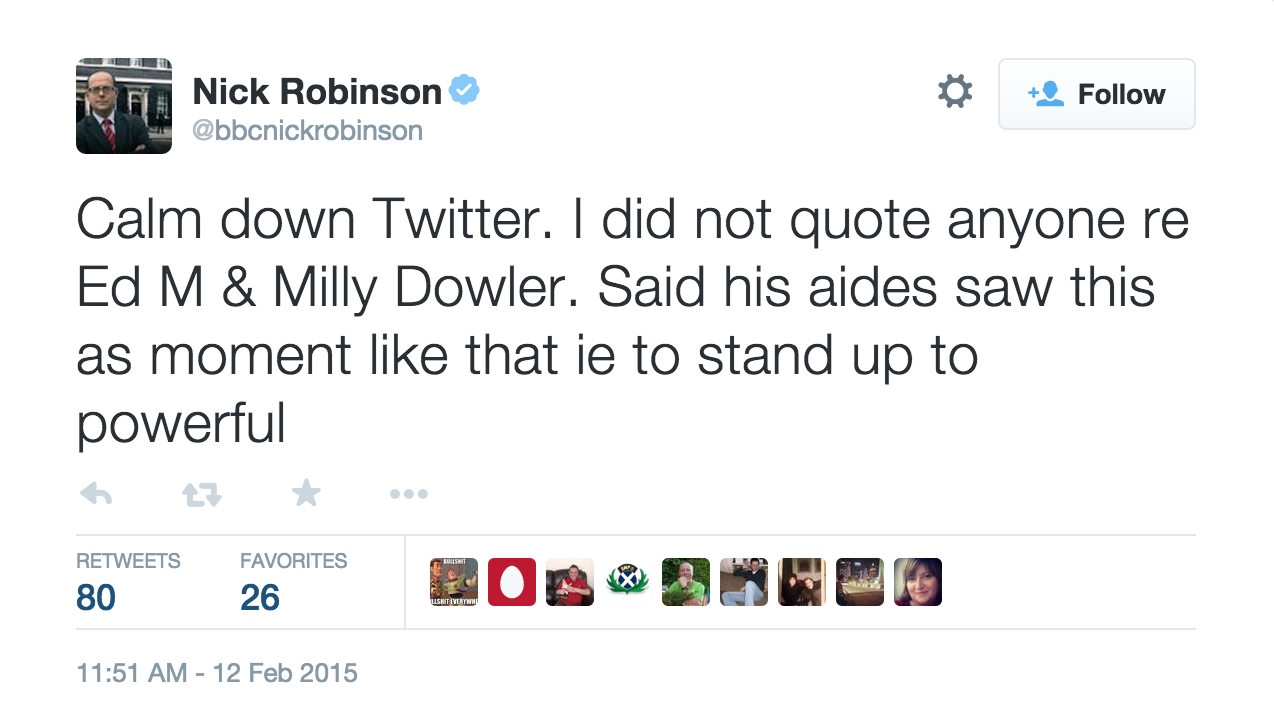 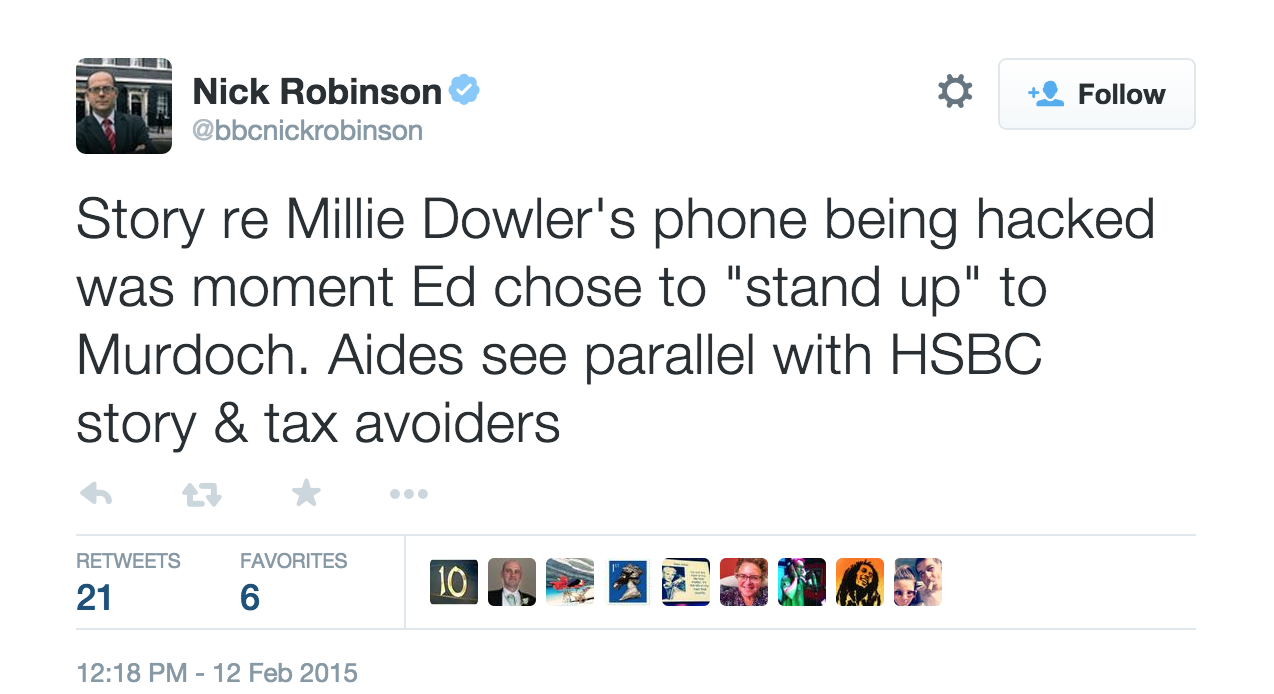 “Calm down Twitter, I did not quote anyone re Ed Miliband and Milly Dowler. Said his aides saw this as moment like that to stand up to [the] powerful … Story re Milly Dowler’s phone being hacked was moment Ed chose to ‘stand up’ to Murdoch. Aides see parallel with HSBC story & tax avoiders” he told. And, as Jon Stewart might have said, two things here. One, Miliband apparently made no comparison between the actual “Dowler moment” and tax avoidance. And two, Robinson is interpreting, not merely reporting. 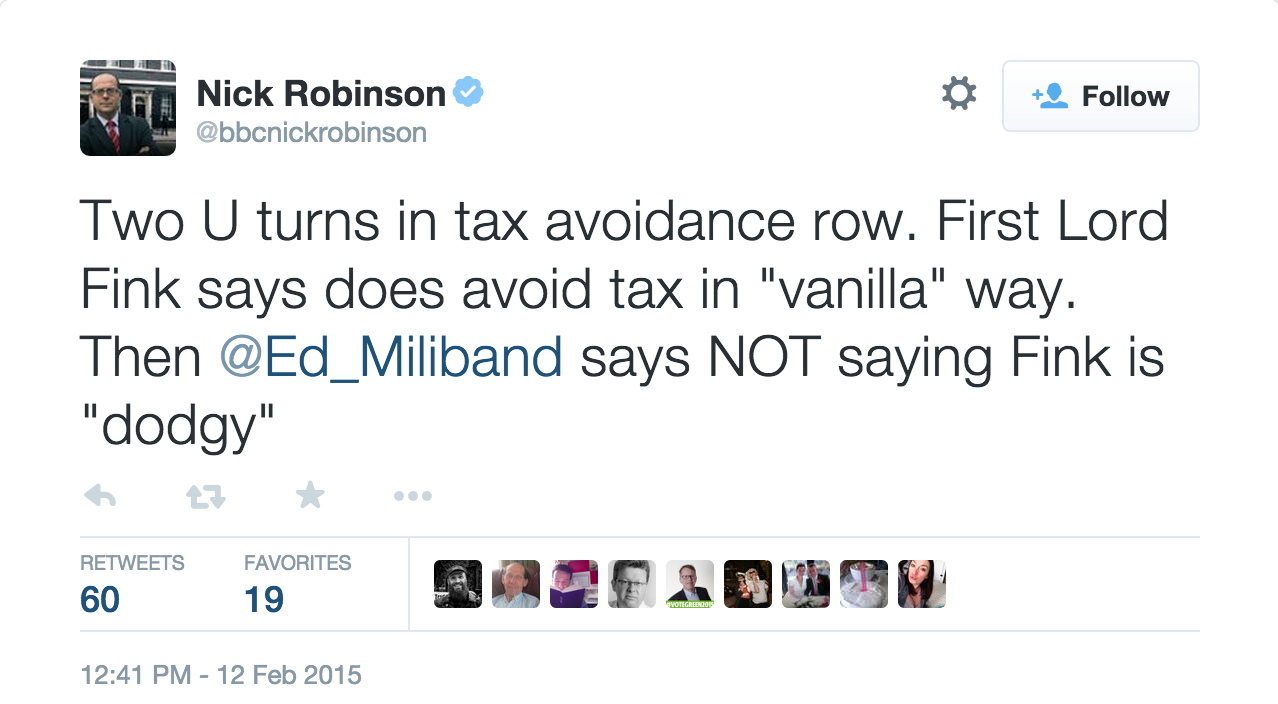 He also doesn’t do himself any favours by trying to be rather too even-handed over the exchanges between Miliband and Stanley Fink: “Two U turns in tax avoidance row. Fink says [he] does avoid tax in ‘vanilla’ way. Then [Ed Miliband] says NOT saying Fink is ‘dodgy’”. He didn’t say he was in the first place, and, as I told yesterday, a quick scan of the Hansard record will show that he didn’t. 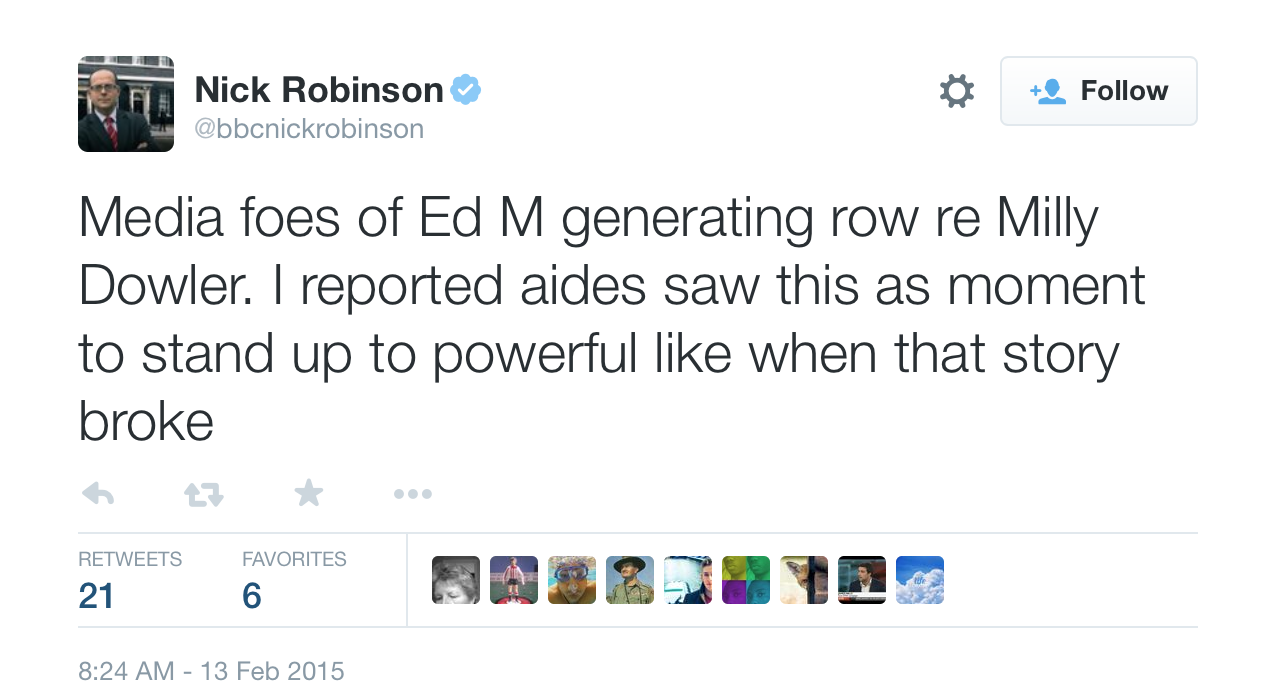 And Robinson is protesting rather too much this morning as he claims “Media foes of Ed [Miliband] generating row re Milly Dowler. I reported [that] aides saw this as [the] moment to stand up to [the] powerful like when that story broke”. So he gives his own interpretation of what someone else may have said, reports that someone else is generating the row, then claims detachment and walks away, apparently unscathed.

Steady on, Nick. You do want those aides to talk to you again, don’t you?
Posted by Tim Fenton at 11:20

More "misconstrued" or "misconceived" conments on Twitter taken by our beloved press and twisted to suit agenda yet again.

Don't you just admire the fighting spirit of the dinosaur press as they follow the inevitable path to extinction as they help create a totally cynical public?

In original report he states:
"The Labour leader's aides say that he sees this as another Milly Dowler moment"
Then he tweeted (The tweet he spelt her name wrong in):
"[I] Said his aides saw this as moment..."
and he talks about U-turns!

Nick is far too media savvy to know how his comment was going to be taken. What he has done is to buy into the deep emotional sympathy that people have towards Millie Dowler and her family, how they were treated by the feral press and conflate it with something completely unrelated. Classic sociopathic behaviour in order to achieve objective of vilifying mark. Slow hand Clap Nick. I wonder how the Dowler family are feeling this morning?