A crisis for Mil The Younger? What crisis would that be, then? Ah, but the desperation of those still holding a candle for the blessed Tone knows no bounds, to the extent that they are prepared to sell what remains of their souls to the Mail On Sunday, where a phoney crisis has been manufactured in order to stand up the thundering headline “LABOUR KNIVES OUT FOR ‘LOSER’ RED ED”. 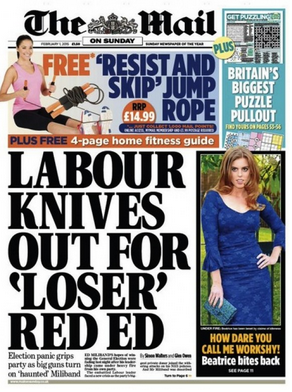 You didn’t know about this ‘crisis’? Nor, it seems, did the rest of the press, as the supposed revelation has not made any other front pages. There is one very straightforward reason for this: it has been manufactured to order, to give the impression, by nudges and winks, use of “observers”, “insiders”, “sources”, and other devices via which the MoS prints what it bloody well likes, that Miliband is already down and out in North London.

But the paper’s political editor Simon Walters goes wrong at the start, as he brings up that Westminster political correspondents’ dinner speech: “Ed Miliband has finally admitted that The Mail on Sunday’s account of his Mr Bean-type blunders when he lived with the family of a former Labour mayor is true. In a speech in Westminster last week, the Labour leader tried to make light of his habit of getting into scrapes”.

Walters misses one teensy bit of that speech out: the part where Miliband notices that Simon Walters … is not there. That rather pisses on the proverbial firework. And the support cast does not stand up to serious scrutiny, as readers are told “Isolated. Indecisive. The haunted look of defeat. Why even Ed Balls has all but given up on Ed Miliband: A devastating critique by editor of the Left's in-house bible”.

“The Left’s in-house bible”? What that? That, it seems, is The Staggers, which is nothing of the sort, certainly not under the editorship of one Jason Cowley, another in the sad and sorry line of disaffected Blairites who would rather Labour lose in May than face five years with a Prime Minister who is, for them, the wrong Miliband brother. It takes a special kind of loyalty to go in and bat for the other team.

The MoS lines up more of Tone’s passed-over Majors, not least Alan Milburn, who left the Commons five years ago. Some of their chosen quotes do not say anything disobliging. But, as Mail On Sunday Comment shows, you just apply spin: “Ed Miliband's Election campaign is sinking before it has been properly launched. No major political party in modern times has gone into a General Election so riven by defeatism and disloyalty”.

Maybe there is a sliver of fact somewhere in this steaming pile of bovine by-product. Maybe the Daily Mail will report it as fact tomorrow and try running with it during the week. Maybe someone will see the record is stuck and change it. Maybe pigs will fly. Miliband has failed to bend before the will of the right-leaning press. Their mean-spirited bitterness towards him for forcing Young Dave to order the Leveson Inquiry is on display again.

It’s still sad to see the Blairite rump doing their bidding, though.
Posted by Tim Fenton at 11:24

So, UKIP wasn't borne out of extreme right wing Tories with Cameron? So two Mps defecting with possibly more to come is no disloyalty? Am I missing something here?

I presume the Liberals are not counted as a major political party.

The wiseacres of Dacres are fakers!

The Mail's main point is that Miliband admitted in his speech that Winter's allegations were true. Pity you didn't make more of that lie. I hope you'll do a follow-up!