Taxation is, for the well-off, one of those political minefields that must be negotiated with extreme care. One suggestion that concern is merely naked self-interest and another example of someone wanting to hold on to their pile and stuff the rest, and Bang! Another argument bites the dust. This does not seem to have occurred to the increasingly overmonied Jeremy Clarkson, who is pleading poverty. Badly. 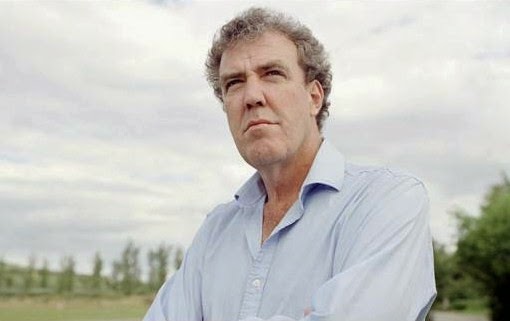 I looked at the Mansion Tax proposals, thought for a minute, did my sums ... and then I shat myself

Jezza’s Sunday Times column is hidden away behind a paywall, but an enterprising Zelo Street reader has snapshots of the print edition available to me (see how that works, Rupe?) from which it is clear that The Great Man has been experiencing inadvertent bowel movements in reaction to the proposed Mansion Tax, which might make him a few thousand notes a year worse off. That’s as in a few thousand out of several millions.

So it’s entirely possible that yer average ST reader, making a middling £35-45K and restricted to a choice of one house, might have difficulty sympathising with him. OK, what’s the pitch? “When I’m in London I stay in a modest flat on the top of a tower block just a few yards from the extremely unglamorous and very noisy Shepherds Bush Green”. Slumming it, eh? He must be terribly hard up. Do go on.

“By no means of the imagination is it a mansion. But if we get Ed Miliband as Prime Minister he’ll say that it is and charge me £30,000 every year for the privilege of owning it”. And, as Jon Stewart might have said, two things here. One, Jezza has added a nought to the proposed Mansion Tax, which may be OK at the Murdoch press, but in the real world, that kind of dishonesty does not earn him any Brownie points.

And two, if it’s such a modest flat, how come I can find one on the Rightmove website for a quarter of the Mansion Tax threshold? Just round the corner from the Green, Winkworths have a two bed flat on the market for under £490,000. It gets worse: Clarkson not only has a rather more than modest flat, but also fails to tell ST readers that it is not his first home. As any fule kno, that is in Chipping Norton. 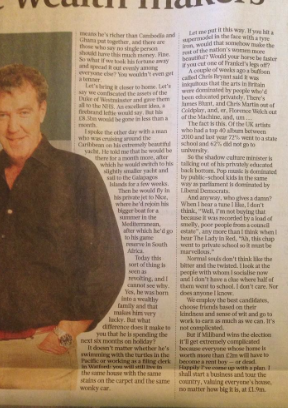 Yes, Jezza, most of us who live out of town have to make do with a B&B when we’re in London. That includes most of those hardworking ST readers to whom you are preaching your steaming pile of bovine by-product. And the flat in Shepherds Bush is not even his second home: that is on the Isle Of Man. So we’re asked to sympathise with someone who owns a reassuringly expensive and diverse property portfolio.

But then, he sprays it all up the wall with the headline “Call the Mansion Tax what it is, Ed: a kicking for the wealth makers”. Very good Jezza, your wealth was made by all those ordinary Joes and Joannes tuning in to Top Gear and buying into the brand - you know, middle income TV Licence payers. Next to none of them will ever approach Mansion Tax land. But good to know you’re as out of touch as ever.

Another millionaire bleats about having to open his wallet. No change there, then.
Posted by Tim Fenton at 13:43

Come on Jezza, promise / threaten to sell up and move abroad if that pesky Labour party gets the keys to No.10 in may.

The roads on which he is so delighted to drive on are, oh yes, publicly funded through tax. Unless he wants to only drive along the M6 Toll road (at £5.50 a go) perhaps he ought to see the point of taxes.

I thought his wife had thrown him out of the pile in Chipping Norton after he was caught playing away....

Perhaps he needs that flat fro "playing away". It's not the same in a B&B!

Has Clarkson sold his Langness, Isle of Man lighthouse, then? If so, the poor dear down to just

one of the things that frustrates me most about this, and other rich people writing on property, is when they try to deny the attractiveness and value of their investments. you also got this from Daisy Goodwin in the Mail the other week who in an otherwise pretty good piece tried to claim that her 2.5mil house was somehow grotty, and thus an unattractive prospect, when she bought it.

And here, either Clarkson is massively lying about the value of his flat (if it's a penthouse of one of the big tower blocks then it was worth 300k in 2011 according to previous sales, so nowhere near mansion tax levels even now when it might be worth a max of 500k) or alternatively, he's being a bit dishonest about where the flat actually is. Given that he's also being dishonest about the tax itself, I call total bullshit on this one.