The Super Soaraway Currant Bun’s campaign against the BBC, which I touched upon yesterday, would not be complete without a suitably opinionated pundit to loose off their North and South in support of it. And so it came to pass that Rod Liddle, famous for not much more nowadays than being Himself Personally Now, launched an attack on the Corporation, out of which he has done rather well over the years. 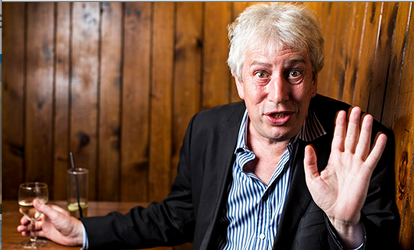 Lush? Me? Look mate, I'm only on my fifth glass, okay?

The result is as dull as it is predictable: “The BBC is politically biased to the liberal left and cringingly politically correct. Hugely incontestably biased [that means don’t challenge him because HE KNOWS THESE THINGS]. Its foreign correspondents thought the Arab Spring was marvellous, remember [no, sorry, I don’t, and I see you can’t name one who did] - and then look what happened!” But do go on.

“They hate Israel and are not terribly keen on the UK or USA. But oh boy do they love the European Union! Anyone who disagrees is, of course, a xenophobe. At home they are vociferously pro-immigration, anti-business and pro-Islam and believe unarguably in climate change”. Yeah, right. There was, as Captain Blackadder might have said, only one thing wrong with this idea - it was bollocks.

All that Liddle can manage is nods and winks, wild accusations and smears. He even tells that Meet The Ukippers was “A whole programme portraying UKIP as a bunch of racist fruitcakes”, not letting readers know that the racism and fruitcake tendencies were a result of what the Kippers actually said. The BBC did not need to produce a “portrayal”. But good to see Creepy Uncle Rupe is still well disposed towards Mr Thirsty.

He was editor of the Radio 4 Today programme for four years, during which he hired Andrew “transcription error” Gilligan, whose lousy journalism damaged the programme’s reputation. Liddle left Today after being given an ultimatum by management after shooting his mouth off once too often. It was his own fault, and he’s been given plenty of work by the BBC since then, despite his appalling record of unpleasantness.

This included a misogynist attack on Harriet Harman, racist attacks on the Afro-Caribbean community, accusing many people of pretending to be disabled, dropping the Spectator in the mire and leaving the magazine facing a contempt of court charge, and an excursion on to a Millwall supporters’ website where he made a “joke” about not being able to smoke at Auschwitz. All of which means the BBC will not be taking any lectures from him.

Nobody should take any notice of this wind-up merchant with a huge chip on his shoulder.
Posted by Tim Fenton at 14:04

Rather typical of the gobshite right. Happy to take the Corporation's shilling, then call for its abolition.