Remember 35 years ago, when Mrs T arrived in Downing Street helped along by a group of advisors that included Alfred Sherman? Both are now part of history, and so is one of Sherman’s more truly barking ideas: closing large parts of the railway network and converting them to busways. Those who commute via the Chiltern line out of London’s Marylebone terminus may not know how close that line got to being thus converted. 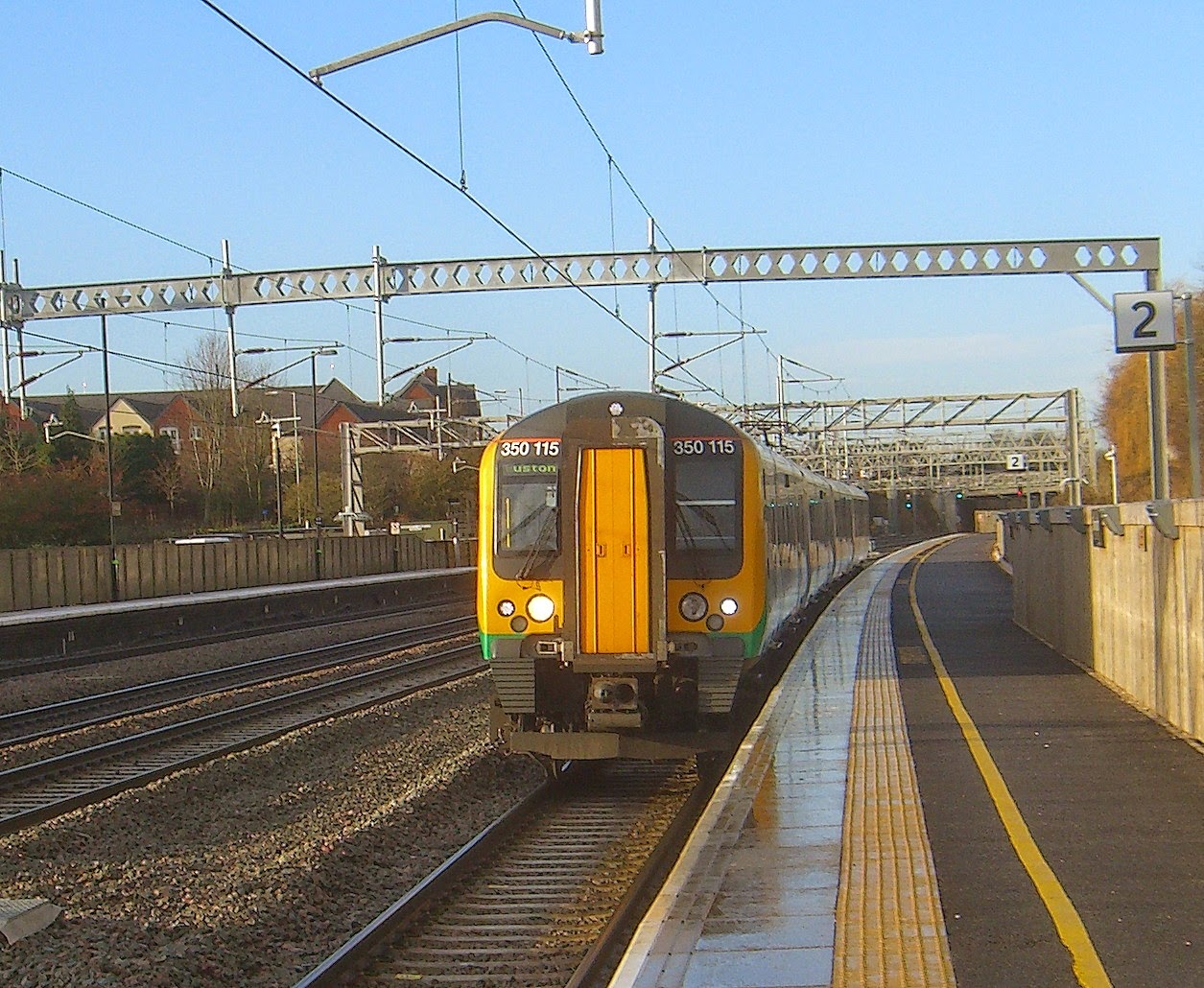 Which part would you like to tarmac over, IEA people? London Midland Euston-bound service on the West Coast Main Line

But now, in order to keep the otherwise unemployable but ideologically pure in gainful employment, the IEA has exhumed Sherman’s ideas. Co-authored by one Richard Wellings, last seen on Zelo Street trying to dismantle the business case for HS2 by making up large, scary and fictitious numbers while pretending freight capacity could be provided by more and heavier lorries on motorways, this report does not stand serious analysis.

“Converting commuter railways to busways could save passengers 40% in fares”, we are told. Note “could”. Also told is “The reluctance of policy makers to consider more efficient forms of public transport”. Right. A pneumatic-tyred-vehicle-on-tarmac is “more efficient” than steel wheel on steel rail? That’s a challenging sell. But it is the capacity argument where Wellings and his co-author fall flat.

Without some kind of guidance mechanism, there would need to be a complex system of lead-in lanes, and even then, the merging process would be yet more challenging. And one look at the National Express website shows another howler: road coaches seat around 49 passengers. To get a capacity of 75 would mean using double-deckers, an idea that would come unstuck at the first overbridge. And what happens if someone stops?

It gets worse: consider the approach to London’s Euston terminus. The commuter trains travel not at 100 kph, but at up to 160 kph. And, if their tracks - I’m assuming the slow lines coming in from Milton Keynes - were given up, then where would all the freight trains go? How would intermediate stations be served without decimating that theoretical maximum capacity? And how in earth could even 100 kph be achieved?

Wellings seems to think that there would be plenty of room for his ideologically pure busways. So let me inject a little reality into his world: look HERE for a Google Earth view of Lady Bay Bridge in Nottingham, a former rail bridge across the Trent now in use as a road. What you get is a narrow single carriageway with a 30mph (48 kph if you prefer) speed limit clapped on it - which it didn’t have when in use as a railway.

Much else in this steaming pile of bovine by-product can be taken apart just as easily. If only it was as easy for Richard Wellings to find himself gainful employment.

[UPDATE 6 February 1445 hours: the perpetually thirsty Paul Staines and his rabble at the Guido Fawkes blog find themselves in one of those Very Difficult Positions today as, having seen the IEA "report" get its customary and well deserved rubbishing, they have in the meantime accepted the money to run a "sponsored post" on it.

Under the title "Getting on the right track", The Great Guido tells readers that the IEA "hit the headlines this week with its suggestion that busy rail lines could be converted to express busways", although very few headlines were in fact hit. The post also asserts that the IEA "concluded that this would radically reduce commuter overcrowding", which it did not.

The word was "could": the Fawkes folks can't even copy and paste honestly. Then they repeat the howler: "The think tank has also put forward other innovative measures that would get Britain`s creaking transport systems moving again – and ease the burden on the hard-pressed taxpayer".

Having posted that - and apparently stopping anyone from commenting - The Great Guido can only sit and watch as the ridicule rains down. Another fine mess]
Posted by Tim Fenton at 12:49

Cambridge was conned into having a hugely expensive Guided Busway. Although now finally capable of being used, it came in late, overbudget, sub-par in construction and ended in costly legal battles.

“It is well established that a single lane of a motor road, free of junctions, may carry up to 1,000 express coaches per hour."

Sounds like the ideal kind of road for these self-driving cars that will definitely be available within 3 years... So presumably the IEA wouldn't object to us getting on and building the HS2 earthworks and bridges, but not laying the tracks?

“It is well established that a single lane of a motor road, free of junctions, may carry up to 1,000 express coaches per hour."

Is this Modern transport planning written by Jane Austen?

"During the bloody breakup of Yugoslavia, he was an adviser to and apologist for President Radovan Karadzic of the Serb Republic of Bosnia, from 1993 to 1994."

Max capacity for a single lane is 2100 vehicles per hour, given ideal conditions. Identical buses would be pretty close to ideal. 1000 an hour would seem very achievable www.indevelopment.nl/PDFfiles/CapacityOfRroads.pdf

The comment above links to an interesting article, but does state that 1000 is the max possible under ideal conditions, and lists a number of other factors that reduce this number considerably, eg weather, corners, entry and exiting junctions, backing up traffic from roundabout or lights.. Clearly 1000 coaches is not achievable.

How bizarre, I was just reading the story of the original proposals yesterday at http://www.londonreconnections.com/2014/near-terminal-case-saving-marylebone-rail-road-conversion/

There will always be idiots.

Max possible under ideal conditions (whatever it is) is never a good idea to build into actual operations. Look at Heathrow, planned to run at near max possible, as soon as there's a bit of fog or snow it all goes wrong. Imagine planning 1000 coaches an hour then cancelling 400 an hour because of ice!