You know when the Daily Mail refuses to go along with the rest of the press pack that it is usually on one of the legendarily foul mouthed Paul Dacre’s crusades to tell those readers with whom he has his mythical “conversation” all about how the world is wrong, and Dacre is right. And he is always right when it comes to kicking the hated BBC, thus today’s thundering headline “POLICE AND BBC ARE SAVAGED OVER SIR CLIFF RAID”. 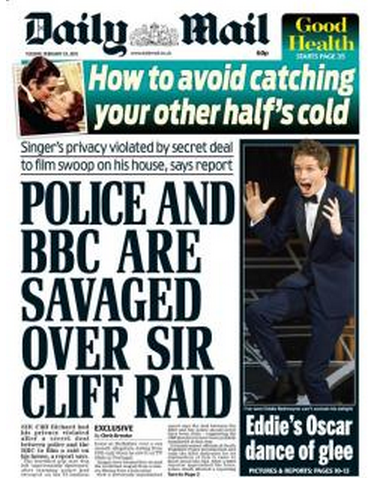 Anyone who looks in regularly on Zelo Street will know that this is a campaign that the Mail has been waging for some time, mainly because the Beeb got the exclusive when the Police raided the singer’s apartment in Berkshire and the Mail, er, didn’t. This mardy strop even extended to the Mail On Sunday running a front page with the headline “SIR CLIFF: I’LL SUE THE BBC”, despite not getting a comment from him.

Is there any relevance in today’s attack, then? Here’s the story: “Sir Cliff Richard had his privacy violated after a secret deal between police and the BBC to film a raid on his house, a report says. The horrified pop star was left ‘unnecessarily distressed’ after learning police had swooped on his £3.5million home in Berkshire over a sex assault allegation dating from 1985 only when he saw it on TV while in Portugal”. There’s more.

“Now a previously unpublished report says the deal between the BBC and the police should never have been done - suggesting Sir Cliff should not have been publicly humiliated in this way. It brands senior officials at South Yorkshire Police incompetent and calls the BBC dishonest for its explanation of how it came to know about the raid. The damning report - released to the Daily Mail under the Freedom of Information Act - concludes”.

And here it gets a little less easy for the Dacre doggies: “Police were wrong to confirm details of a ‘highly sensitive and confidential’ investigation to the BBC … They should not have held a secret meeting between a senior detective and a reporter to agree an exclusive deal … The force breached Sir Cliff’s privacy by effectively confirming his identity as the suspect in the inquiry to other media”.

That’s it. And it gets worse: “the BBC reporter, Dan Johnson, was not interviewed … The BBC was not directly involved in Mr Trotter’s review”. And, as Jon Stewart might have said, two things here. Is this a review, or a report? And two, this appears to be an internal Police document that the Mail has obtained, and as such, appears to do no more than tell the South Yorkshire force what lessons can be learned from the raid.

In other words, it does not stand up the Mail’s headline. Andy Trotter’s exercise has no status outside the South Yorkshire Police. It is highly unlikely that it will form part of any proceedings. So why run the story? Over to the Guardian: “The BBC’s controversial coverage of the police raid on Sir Cliff Richard’s home has been shortlisted for scoop of the year at the prestigious Royal Television Society journalism awards”.

And the Mail has decided it can’t let the Beeb win with that. No surprise there, then.

Mistakes are part and parcel of running a blog, and this is one of them. Unlike some blogs I could mention, Zelo Street admits mistakes and listens to reasonable complaints.

So why Dacre went on his crusade today is a mystery, unless of course he just felt like it, or the Corporation had otherwise incurred his displeasure. More soon, no doubt]

[UPDATE2 1845 hours: whoops again - but not for me this time. The Mail has now been, er, savaged by Andy Trotter, the man who wrote the document from which the Dacre doggies have been quoting.

As the Guardian has told, "Trotter told the Guardian: When I saw the headline I genuinely thought it must refer to someone else’s report. It bore no resemblance to my report and at no time did I say the police were incompetent or the BBC was dishonest. My report clearly does not say that'".

It got worse: Trotter added "Neither the police or the BBC are ‘savaged’. I made no comment, whatsoever, about the BBC. That was not part of my remit". He concluded that the Mail's coverage was "highly inaccurate".

So par for the Dacre doggy course, then. The difference between them and me is that only one of us is  prepared to admit to getting it wrong]
Posted by Tim Fenton at 12:53

Reading The Guardian's alternate take the criticism of the BBC appears to be a minor element of the report.

You somewhat underestimate the DMs long term hatred of the BBC. I gave up reading the DM in 1976 because of the lies and half-truths they printed about it.

As one who knows much of the history of the BBC I can tell you that this animosity dates back to its foundation in 1922. The Daily Mail wanted to start up commercial radio. When the BBC was set up instead the DM started its longstanding campaign