Remember the now-notorious “Labour isn’t working” poster used by the Tories during the 1979 General Election campaign? You might also recall that the people featured in the poster were not unemployed – as was inferred – but were volunteers from within the Tory Party. It’s one of many examples of parties being caught out using their own supporters who then pretend to be “ordinary voters”. 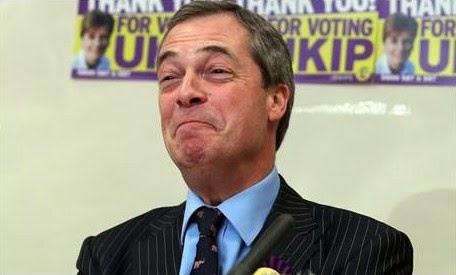 Squeaky finger up the bum time once again

And getting thus caught out is par for the election course. No credible political party thinks to call “unfair” when they get caught out in this way – except, it seems, for Nigel “Thirsty” Farage and his fellow saloon bar propper-uppers at UKIP, who do not complain when it happens to their opponents, but get all defensive and trowel on the victimhood complex when it happens to them.

What has also been shown is that when Farage gets prodded a little by the same kind of insistent questioning routinely meted to other party leaders, he gets rattled very quickly, suggesting a disturbing shallowness of both character and substance. When Nick Robinson asked whether he was taking a British worker’s job by employing his (German) wife, the flannel and evasion was almost instantaneous.

But it was the revelation that an “ordinary voter” from Devon, Lizzy Vaid, was actually one of Farage’s aides and UKIP’s events manager, that set the Farage blusterometer off the scale: “The fact that Lizzie Vaid is half-Indian and works for us is as far as we are concerned a non-issue” he ranted. But nobody said her being half-Indian was anything to do with it.

He went on “I can't really win with you, can I? On the one hand you're saying that we are talking about a white working class in Britain, and secondly, when I tell you that working directly for me is a girl who is half-Indian, you've got a problem with that too? Just make your mind up. I don't mind being criticised, but do make your mind up what the criticism is”. And nobody mentioned the white working class, either.

Then there is the suggestion that The Other Parties Are All At It, epitomised by one William Henwood, who got caught saying that actor Lenny Henry “ought to go and live in a black country” (Henry is from Dudley, which is in the, er, Black Country). Henwood also said “Islam reminds me of the 3rd Reich – Strength through violence against the citizens”. But this was brushed off.

UKIP MEP Roger Helmer said “you will find individuals like that in all parties, and behaviour like that in all parties”. Oh no you won’t: this concentration of bigotry, intolerance, paranoia, spivvery and forthright dishonesty is unique to UKIP. You want to play politics, you should expect your policies and views to be scrutinised as harshly as your opponents. Especially if you’re leading in the polls.

Nigel Farage needs to man up and take some responsibility for his pals’ actions.
Posted by Tim Fenton at 11:44

Talking to Labour candidates this morning: UKIP running single issue anti-immigration/racist campaign. Hardly mentioning the EU or any of their actual "policies".

following on quickly from Lizzy there's been another cock-up. An advert about Britsh workers losing jobs to EU nationals , and the person posing is - an Irish actor! Is this another case like his German PA (or wife) where no suitable British person could be found?