Publicist and spinner to the stars Max Clifford received a significant setback to his efforts to continue in the style to which he had long ago become accustomed today when, unlike other recent cases brought for historic sex offences, he got guilty on eight counts and is now awaiting sentencing, which has been pencilled in for Friday. He was cleared of two further charges, with the jury unable to agree on one more. 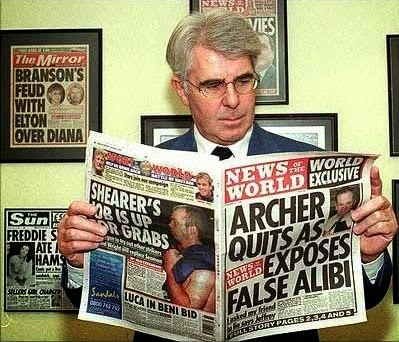 It'll be you on the front page tomorrow, matey

Warned that being granted bail could not be taken as an indication of sentence, Cliffus Maximus (for it was he) stood out front of the court building and told the press pack that “I have been told by my lawyers to say nothing at all”, which must have been an unusual experience. But nobody need feel short changed, because everyone else piled in on him instead. 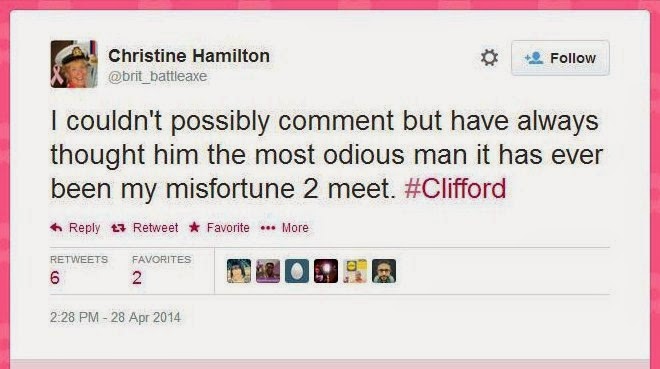 And leading the grid round to the rolling start was one Christine Hamilton, brass neck well and truly extended, to assert “I couldn’t possibly comment but have always thought him the most odious man it has ever been my misfortune to meet”. Apart from the bloke you married, eh? You remember, the one the Guardian called “A liar and a cheat”? The one who lost the third safest Tory seat in England? 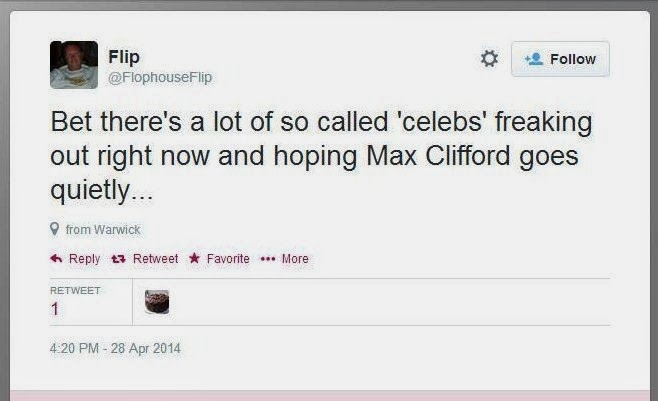 Whatever. We were soon on to rather more serious matters, as one Tweeter told “Bet there’s a lot of so called ‘celebs’ freaking out right now and hoping Max Clifford goes quietly”. As Derek Jameson might have said, there surely are. Clifford must know, if not where the bodies are buried, where who did what to whom, and when. And the shop where they bought the equipment. 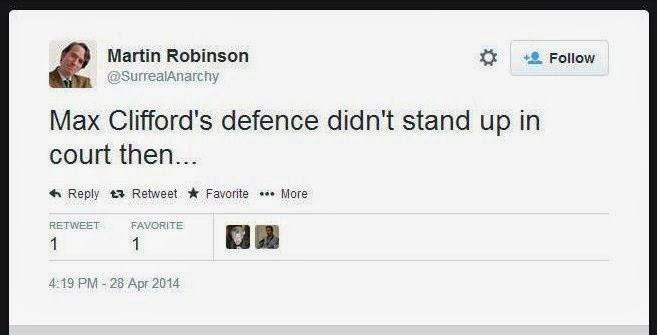 But all of this was rather serious stuff. Where was the light relief? Was a member of the fnarr fringe in the house? You betcha, says Sarah: Martin Robinson was there to recycle the joke that Private Eye put on the cover when John Lennon got nicked in the late 60s: “Max Clifford’s defence didn’t stand up in court, then”. Kersnick, kersnick, spab, spab. I don’t wish to know that, kindly leave this Twitter exchange. 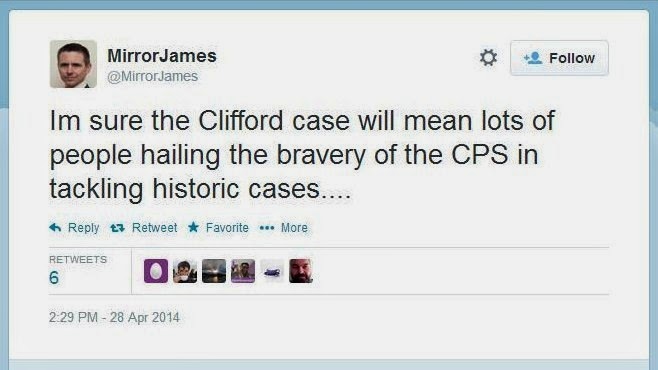 Meanwhile, James Lyons of the Mirror was reminding anyone with a memory stretching back further than last week “I’m sure the Clifford case will mean lots of people hailing the bravery of the CPS in tackling historic cases”. The CPS took a lot of stick over cases such as those of William Roach and Nigel Evans, but following the Clifford guilty verdicts, there has been little praise for them. 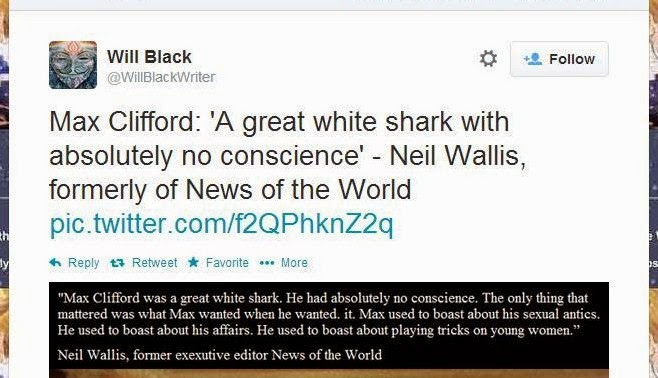 And to finish, some jaw-dropping hypocrisy: “Max Clifford was a great white shark. He had absolutely no conscience ... Max used to boast about his sexual antics. He used to boast about his affairs”. So said Neil “Wolfman” Wallis, someone who knows all about boasting about things, and whose conscience, if it ever existed at all, was something he used to keep well hidden.

Hindsight, schadenfreude, and good old high principles. You can’t beat them.
Posted by Tim Fenton at 17:38

Difficult situation with Clifford. Not straightforward at all ... As someone who had a lot of dealings with him over the years I formed my own personal opinion - especially uncomfortable over the way Jade Goody's affairs were handled. I expressed my reservations to my superiors. Most people felt the same BUT like Savile he had huge power and menace and influence with powers-that-be. No-one dare cross him because of the consequences. His life was built on a big lie and he forced others to live one too...