The Tories have not had much electoral success on Merseyside in recent years. Their last MP in Liverpool was unseated more than 30 years ago, and even on the Wirral, the party has not fared much better. One bright spot, though, was the victory by former TV presenter Esther McVey in Wirral West in 2010. But after her, shall we say, serial faux pas yesterday, that win will not be repeated next year. 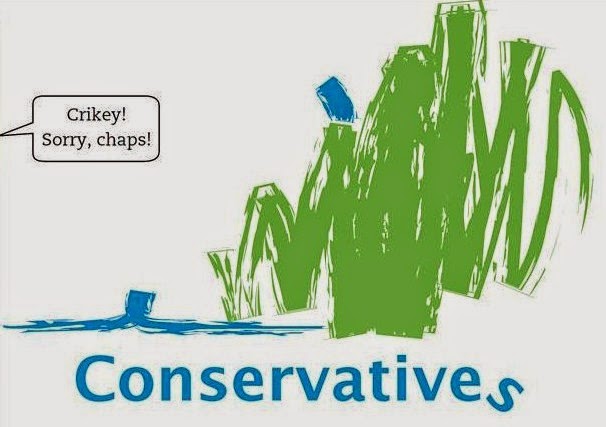 Ms McVey has of late been talked of in terms of ministerial promotion, which, to many on Merseyside, is a truly frightening prospect: there are women journalists who have become formidable presenters and interviewers, like Fiona Bruce, Sophie Raworth and, yes, Kay “surly” Burley, and then there are the I-Speak-Your-Weight machines like Esther McVey. 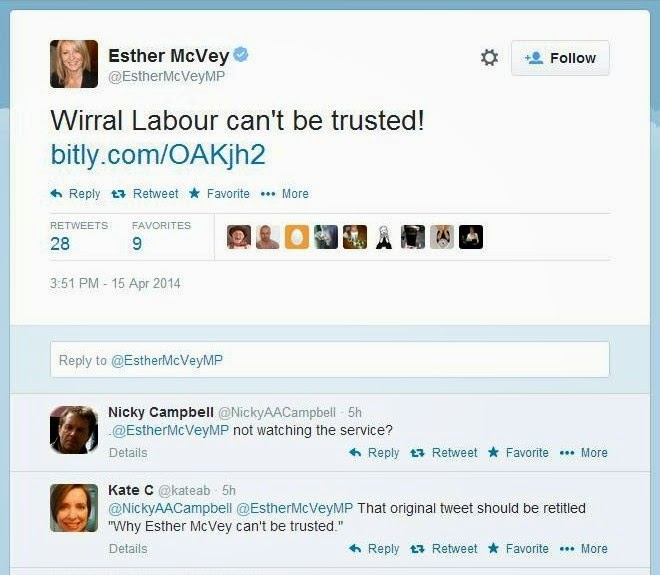 And, for some reason, Ms McVey, who is supposedly both a native of the area and switched-on and sensitive to local issues, did not know, or was not fussed, about yesterday being the 25th anniversary of the Hillsborough tragedy, and that there were memorial events taking place at Anfield and Goodison Park, among other locations. Instead, she took to Twitter to kick her political opponents. 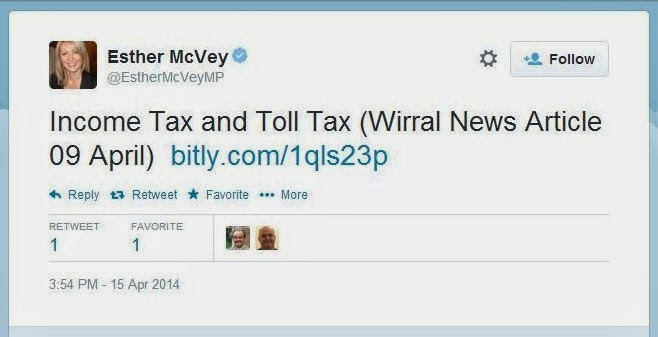 “Wirral Labour can’t be trusted” she Tweeted at around the time Andy Burnham stood up to deliver his address at the Anfield service. Radio 5 Live presenter Nicky Campbell nudged her gently with “not watching the service?” but this had no effect whatever. Instead, three minutes later came a plug for her Wirral News article “Income Tax and Toll Tax”. 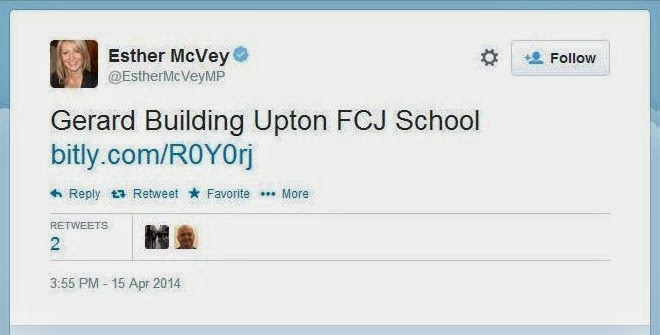 Perhaps an apology would appear, as realisation set in? No such luck: her faithful Twitter followers were then treated, just the one minute later, to a link about the Gerard Building at Upton FCJ School. The memorial services were still going on when she Tweeted another promotional link, with one reply asking “you Tweeted during the service? I thought you were Scouse”. 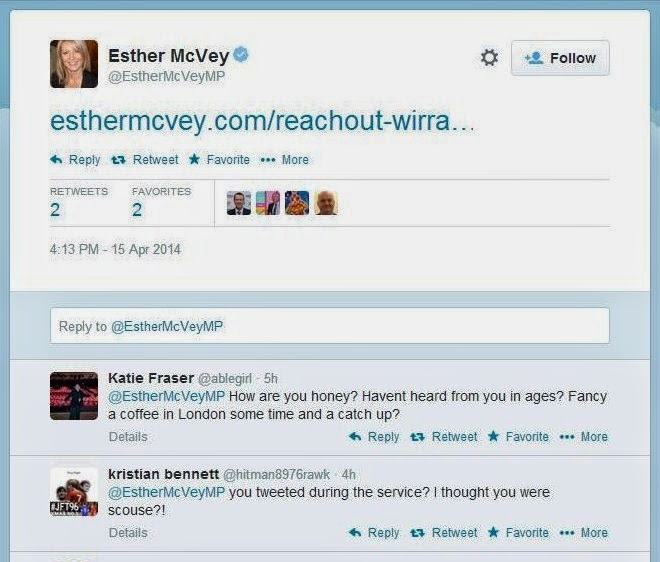 It took another three hours for the penny to drop with Ms McVey – or, perhaps, for someone to take her aside and cause the penny to drop – during which time her reputation on Merseyside slowly disappeared down the pan. Then, when the apology came, it would have made even Maria Miller stop and think. “Really regret the mistiming of local election press release. Apologies”. 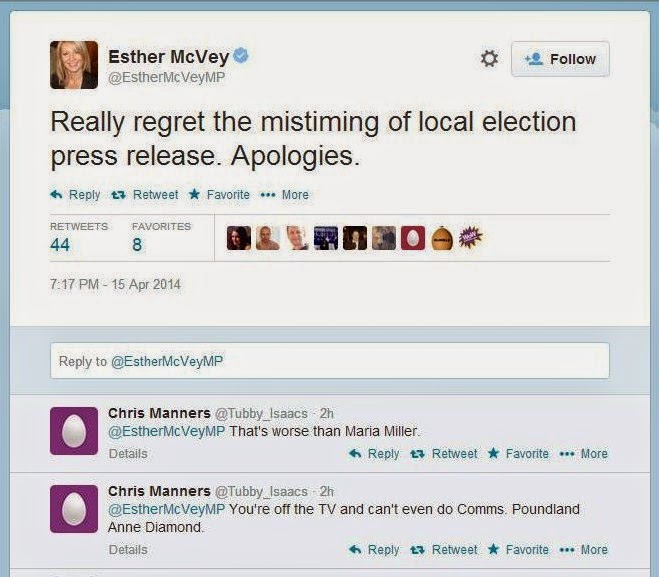 Most of the comments following that Tweet were not merely adverse, but openly hostile. Disrespecting the memory of the 96 is, for a politician on the Wirral, in the category of Totally Unforgiveable Sins For Which There Is No Redemption. Esther McVey will have that round her neck like the proverbial millstone for the rest of her political career. Which will end at next year’s General Election.

[UPDATE 18 April 1130 hours: now it has been revealed by the Echo that not only was Esther McVey not the one Tweeting from her account - so she managed not to tell whoever sent the offending Tweets about the memorial service - but also that the Tory Party election machine managed to phone 73 unsuspecting voters in the area during the service.

These included the son of a former Tory Mayor of Wirral, who was not impressed: "It was the wrong time to call. It was ill-judged. It seemed outrageous to me. It showed a lack of awareness". At least a spokesman managed to say sorry: "We apologise to anyone living in Merseyside who was upset by receiving a call at this time".

What the party might not have realised is that those on Merseyside have long memories when it comes to the insensitivity of outsiders. That's another reason the Tories would not be helped by putting Boris Johnson up as a future leader, after his infamous Spectator editorial]
Posted by Tim Fenton at 10:49

Of course the real joke is that she probably didn't tweet these herself. Most ministerial tweets are arranged in advance and wording agreed (I have first-hand experience). But she obviously can't admit that without making herself look like an even bigger twerp. So she is way up the creek without a paddle.

It's even worse than that, all the other Merseyside MPs were at the service!!!

Looks like I got it right. I'm great, me!

Now if only most other ministers would come clean about "their" tweets..... Press offices agree that a certain tweet will be released at a certain time during a certain event. Why try to hide it?