So Patrick Mercer decided not to hang on until next year’s General Election, nor to contest his six-month suspension from the Commons. He immediately faced the media and declared that he would resign, even though this would precipitate a by-election. The Westminster bubble immediately exploded in the self-belief that this could only mean Farage, and probably Boris too. 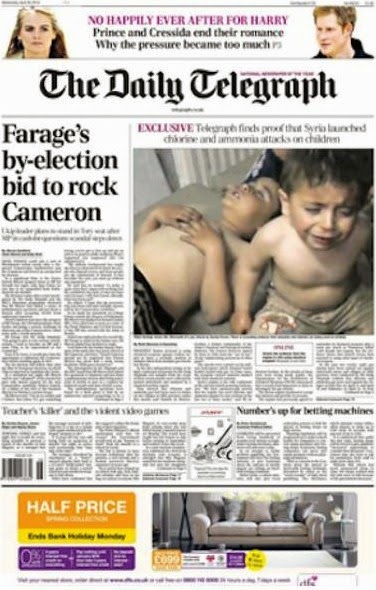 Such was the ability of the more easily led among the commentariat to convince themselves of this highly unlikely scenario that the Maily Telegraph committed to the front page lead “Farage’s by-election bid to rock Cameron”. This slice of hokum has survived; the original article has been withdrawn from the paper’s website. Thus another failure to learn from “Dewey Beats Truman”.

Because, after sleeping off whatever tincture he had imbibed yesterday evening, Nigel “Thirsty” Farage declared this morning that “I have no doubt that UKIP will throw the kitchen sink at this Newark by-election, but it won’t be me doing it and we won’t get that huge distraction ... I don’t want to do anything that deflects from the European election campaign so I’m not going to stand in this by-election”.

And why has Sir decided thus? “It was only 12 hours ago that Patrick Mercer stood down so I haven’t had long to think about it, but I have thought about it and we’re just over three weeks away from a European election at which I think UKIP can cause an earthquake in British politics, from which we can go on and not just win one parliamentary seat but win quite a lot of parliamentary seats”. He bottled it.

The excuse that Farage is fighting a European election is bunk: he was, it should be remembered, supposed to be a full-time MEP when he made great show of contesting Buckingham back in 2010, as a challenge to Commons Speaker John Bercow (he came third, with 17.4% of the popular vote). There was no talk of having to concentrate on Brussels, rather than Westminster.

Yet those stating the obvious – that Mr Thirsty has bottled the contest, and most likely because he would have lost, and lost badly – are conspicuous by their being rather thin on the ground. A notable exception is Adam Bienkov, who has spelled it out: “Nigel Farage was accused of ‘bottling it’ today after raising the prospect of standing in and winning the Newark by-election, only to walk away from the fight”.

That so many media outlets were so ready to kick Pa Broon, but are somehow reluctant to do the same to Farage, I will leave without further comment. Oh, and for anyone who has not forgotten the suggestion that Bozza might fetch up in Newark – he won’t. That, folks, is why bookies were offering such good odds on that particular double-act. Because it wasn’t going to happen.

It’s always useful to live in the real world. Even if you work at the Telegraph.
Posted by Tim Fenton at 11:55

Bottling it may imply he is waiting for a greater vintage opportunity?

But will it arise once the froth has settled down?

Let us hope he just hops it.

Maybe it was the thought of standing down as MEP if he won. He'd be considerably out of pocket given the tighter rules of allowances etc.


Or maybe he knows something about Newark and is being very clever to avoid all the negative (for UKIP) photo ops that would crop up. No, it's probably the money angle, but hopefully the photos will still get an airing. You see, in Newark cemetary there are the graves of 397 Polish servicemen plus a memorial to many thousands more, all of whom died serving with UK forces in WW2.

Obviously UKIP and the Daily Express etc. wouldn't want to draw attention to this little episode. As one of their phrases goes, "what's Poland ever done for us?"