“She was the wildest, funniest, cleverest, wittiest and the most bonkers of all of us. Writing 'was' destroys me afresh. What a beautiful child. How is this possible that we will not see her again? How is that bearable? We loved her and will cherish her forever. How sad that sentence is”. Bob Geldof had good reason to be distraught, after daughter Peaches was found dead yesterday. 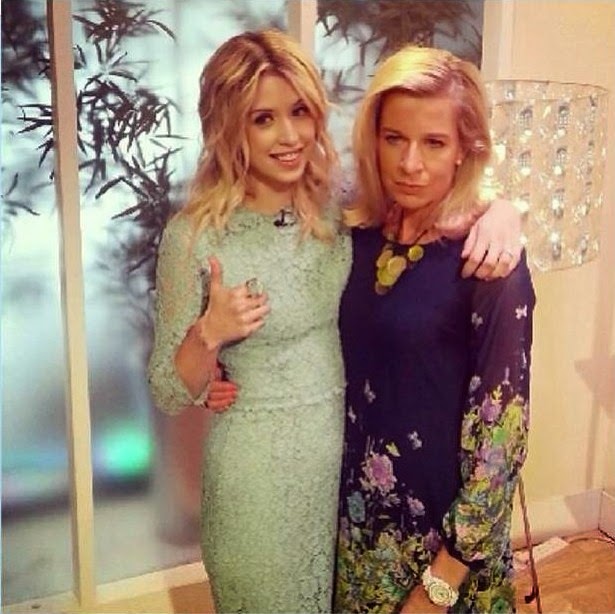 Peaches Geldof with someone who, so far, has wisely kept her trap shut

The family had already suffered more grief and upheaval than most people will experience in a lifetime: Geldof’s first wife Paula Yates left him for Michael Hutchence, she had a daughter with him, Hutchence was then found dead, Yates discovered what had been the stuff of urban legend for years – that her father was Hughie Green – and then she too was gone. 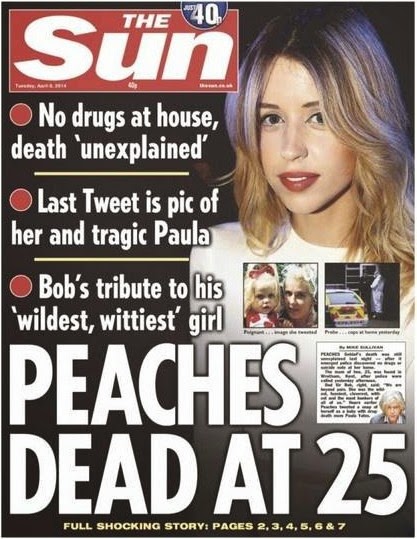 To this background, growing up with the “sleb” label pre-applied, and with the camera never far away from being in her face, it cannot have been easy for Peaches. And that camera is in the family’s face even when they might be expected to be allowed just a little time to come to terms with the loss. It might also be expected that the press could behave themselves for once. 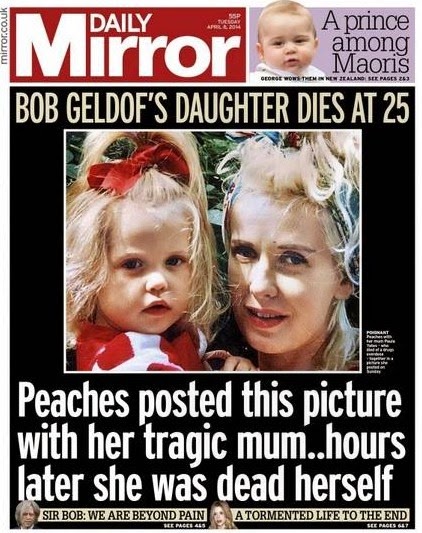 After all, with the press regulation debate raging, and having supped once too often in that proverbial last chance saloon, the case for restraint could never be stronger. But the signs are not good: the coverage has already moved from mere reporting into forthright intrusiveness. One scan of this morning’s front pages is all anyone not so persuaded needs to know. 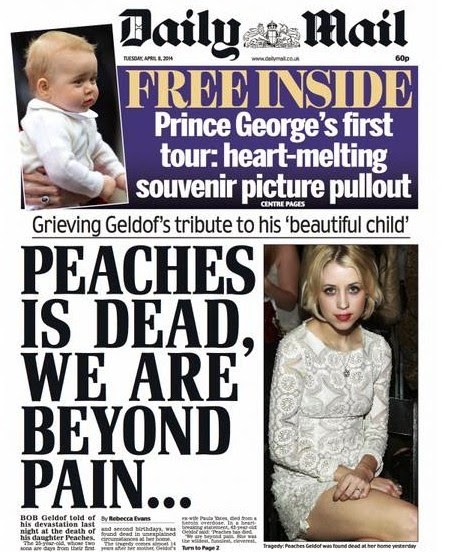 Ms Geldof’s still extant Twitter feed was immediately raided for material. The Murdoch Sun managed just one short word of headline content before it said “Drugs”, following that with splashing the story all over the paper’s first seven pages. The Mirror went for the photo of a young Peaches with Paula Yates. And the Mail got Sara Nathan to trawl through the dead woman’s life in minute detail.

But that will not be the end of it: what many are now bracing themselves for is the inevitable hatchet job. Michael Moran was not being at all flippant when he Tweeted “Can someone hide all of Jan Moir’s crayons for a bit please?” and we all know why. There is a part of the Fourth Estate that cannot help itself when it comes to intrusive and judgmental behaviour.

Even with the court of public opinion watching more keenly than ever, that urge to do whatever it takes to put on a few more sales, and stuff the consequences, is unlikely to be stilled for long. Maybe there is more to come on Peaches Geldof’s untimely death. Maybe there will be more stories. But maybe her family, just this once, can be allowed a little time without the lens in their faces.

So long, Peaches. Don’t go causing too much mayhem upstairs, now.
Posted by Tim Fenton at 10:52

The problem is that the public are interested and will buy it notwithstanding it's not in the public interest.

It's like motorists who slow down to see what's happened on the other side of the road after an accident.

Except in this case there is money to be made from exploiting misery.

I was an admirer of Peaches but I won't be buying any of these newspapers. If only they gave her this much respect when she was alive.