“EU Plot To Axe British Number Plates ... They want standard European car reg” screams the Express today (the Mail has its own version), as obedient Desmond hack Macer Hall tells gullible readers “BRITISH car number plates could be outlawed in a European Union vote next week”. As Captain Blackadder might have observed, there was only one thing wrong with this story: it was bollocks. 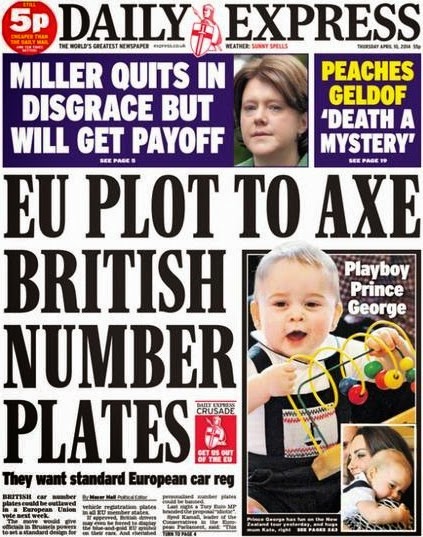 Another work of fiction from the Europhobes

There is no EU plot, nobody wants to impose anything on the UK, and nothing is going to be outlawed in any vote next week, which, if it takes place at all, will do so in the European Parliament. There is no such thing as an “EU vote”. But do go on: “The move would give ­officials in Brussels powers to set a standard design for vehicle registration plates in all EU member states”.

Really? How so? “Under the move, Britain’s traditional system of having a white number plate at the front of a vehicle and a yellow one at the rear could be swept away ... The proposal calls for the European Commission to look at equipping vehicles across the EU with number plates in ‘common colours’”. And the committee concerned is headed by a Netherlands MEP.

So let’s take this nice and slowly, for the benefit of Express readers and all the other Europhobes. Our “traditional” plates with a white background at front and yellow at rear go back only around 45 years. Before then, it was white (or, latterly, fluorescent silver) letters and numbers on a black background. And there is a hint in that mention of the Netherlands – not that the Express wants you to know.

The Netherlands uses yellow backgrounds for both front and rear plates. And the phrase “common colours” is plural, not singular. Added to this is the mildly inconvenient fact that number plates across the EU already conform, more or less, to the same size standards, with national differences such as the font used on German plates, which is said to deter forgery.

Otherwise, black letters and numerals on a white or yellow background is already an EU standard (yes, I know Belgium still allows red letters and numerals, which demonstrates that “imposition of one standard by Brussels” is bullshit). The rest of the Express copy is no better: “Until 2008, motorists could be fined for displaying any emblem other than the 12-star EU logo on their number plate” for instance.

When I bought new plates for my car in 2003, the supplier could have legally made them up with the St George cross, Welsh dragon, or no logo. Hall is talking out of the back of his neck. “The aim of the commission’s plans is to reduce red tape by making it easier, quicker and cheaper for people and companies to re-register their vehicles when moving them across EU borders” is the fact of the matter.

Still, it moves a few more papers, so that’s another Benchmark Of Excellence!

[UPDATE1 1635 hours: the talking heads quoted in the Express article are also in some disarray over the supposed "EU Plot": Syed Kamall, leader of the Tory MEPs, has said of the proposals "Conservative MEPs will be fighting this idiotic plan all the way".

But the amendment that introduced the phrase "common colours", which has been seized on by both Mail and Express, was co-sponsored by Malcolm Harbour - one of Kamall's own group! As Littlejohn loves to say, you couldn't make it up.

The more one looks into this, the more it is clear that politicians and journalists are interpreting the proposals to suit their agendas, rather than allowing mere facts to get in the way. No change there, then]

[UPDATE2 11 April 1415 hours: the EC representation in the UK has let it be known that "There is no proposal or amendment on the table that would create a standard design for all car number plates in the EU. Nobody has any intention of making such a proposal". And, in case we hadn't got that, there was more.

"It is legally impossible that 'officials in Brussels' could be given powers to 'set a standard design for vehicle registration plates in all EU member states' (Express). The EU does not 'want just one version' of number plates' (Daily Mail print edition). It is nothing short of ludicrous to suggest 'cherished personalised number plates could be banned'".

That is as close as it gets to accusing the Mail and Express of lying - which both were indeed doing. And, as the BBC's Duncan Crawford in Brussels notes, the report of the Leveson Inquiry observed that "there is certainly clear evidence of misreporting on European issues". No wonder the press is agin anything Leveson related. I mean, stopping papers from making up any old rubbish about something?

What would the world be coming to for that to happen?]
Posted by Tim Fenton at 12:38

While it may have been legal to supply plates with flags other than the EU one in 2003, I don't think it was legal to use them. The legislation to allow this was the Road Vehicles (Display of Registration Marks)(Amendment) Regulations 2009, which came into force on 27th April 2009.

Also, your link for "black letters and numerals on a white or yellow background is already an EU standard" is to a regulation the controls the appearance of the "distinguishing sign", the blue bit at the left end of the number plate. It says nothing about the colours of the rest of the plate.

There was never any compulsion to use the EU logo on UK number plates, and still isn't. Had a vendor sold plates with a logo that was not the EU one, they would have been liable had the plates been used.

So I look forward to reading about all those prosecutions.

"Conservative MEPs will be fighting this idiotic plan all the way".


isn't there a whiff of Yes Minister about this? A made up story (in the series wasn't it something about sausages...?) followed by a big row in the anti-europe papers, followed by some bemused EU official saying there is no plan, followed by the victorious claim that they stopped the plan. Just in time for Euro elections.


But they missed a tiny point. The few people who think the colour of number plates is an important subject actually want rid of the yellow because they think it spoils the look of their car (if it isn't yellow).

And now they will claim victory. Wait for tomorrow's Mail.

Very interesting article. Thank you and go on with this blog...GNG Team