“I know it’s April 1. But I promise, this isn’t a joke” cautions the Daily Mail’s tired and unfunny churnalist Richard Littlejohn, in a column written some time in March. Dicky Windbag is railing against healthy eating: “In the name of fighting obesity, curry houses, pizza parlours and sandwich bars are being told what to serve”. Not in Crewe, they’re not. Spit out the actual wording, now. 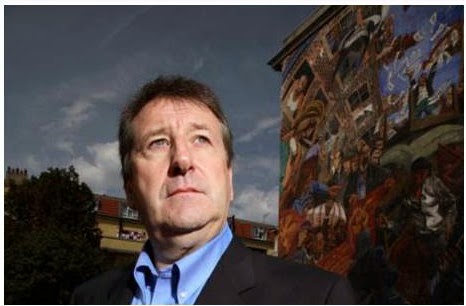 “Ministers aim to persuade restaurant owners to comply by explaining how they can cut portions”. Told you. Or maybe not: “Italian restaurants are being told to shave an inch off the width of pizzas”. Make your mind up. “Fish and chip shops are advised to start serving thicker chips, which absorb less fat”. It can’t be both “advised” and “told” at the same time. No wonder Littlejohn is such a crap hack.

Anyway, I prefer thicker chips, not that I eat many of the things in the first place. How about one of those Dicky Windbag lies to test that my bullshit detector is working? “Council jobsworths are already touring chippies confiscating salt shakers with ‘too many’ holes”. Woah! That’s one happy siren sounding there! But he seems to be deadly serious on this food police rant.

“A couple of weeks ago I was bemoaning the impossibility of finding a simple cheese sandwich any more”. You could always make yer own, although he’s probably too lazy to bother. “Is there anything more disgusting than a grated cheese sandwich with shredded lettuce?” he asks. And the answer is that, yes there is – his intercoursing useless column. Now that’s really disgusting.

Ah look, though, Dick has someone who will agree with him: “Karim, who runs my local curry house, Tandoori Nights”. There’s a curry house in Vero Beach? Things have improved since I last visited the Sunshine State. “I had rogan josh and naan bread last week” boasts Dick, so either curry has indeed come to Florida – or he’s telling another porkie. Probably the latter.

Then it’s back to the shite journalism: “Yes, I know we’re in the grip of an obesity epidemic. But I’m sick to the back teeth of constant edicts about what we should eat and drink. Most of the time, these ‘guidelines’ are made up as they go along”. There he goes again: “edict” and “guideline” are not the same thing. And Dicky Windbag gets bunged the thick end of a million a year for this?

“Politicians haven’t got a clue what to do about any of the big issues, so they content themselves with meddling in the minutiae of our everyday lives”. They don’t know the subject – so they get someone who does to advise them. Unlike Littlejohn, who just shoots his gob off without bothering to do his homework first, or even read his copy to check that it makes sense. And that brings us to the real April Fools.

Those would be Daily Mail readers, taken in by an overpaid and underbrained fraud.
Posted by Tim Fenton at 10:21

Plain cheese sandwich? Try any Tesco, Asda or Sainsburys lunch shelf, anywhere. Or as you say, make your own.

Cheese sandwich. http://www.tesco.com/groceries/Product/Details/?id=260255663
Quite hard to find a Tesco, isn't it? At least it might be where Littlejohn lives.

I wonder if this is the curry house he's claiming to have been too?

Seems to had the company dissolved in 2012

Any one know if Tandoori Nights on Cockfosters is still going?

Oh Gawd, it's not STILL crapping on about evil, under-holed salt cellars as though it's a terrible new story, is it? The excellent Five Chinese Crackers revealed the shite that it was talking on this one back on 25 JULY 2008.