Not all parents of school age children living in the West London area find the pronouncements of the loathsome Toby Young to be something one might support unequivocally. Indeed, Tom Barry of BorisWatch fame has demonstrated his dislike of Tobes’ beliefs by nicknaming him “Captain Bellend”. Those who consider this unfair should check out Young’s latest offering. 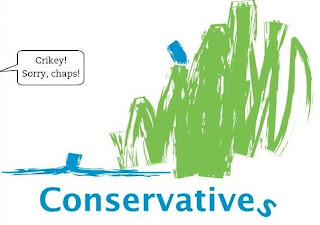 “Lefty 'experts' who want children to start school at seven will create a generation of illiterates” he proclaims, denouncing those who had the temerity to sign a letter to the Maily Telegraph passing adverse comment on “an early start to testing and quasi-formal teaching” for children as young as three years old. Some of the signatories are from Trades Unions. One is a Labour MP.

Therefore, in Tobes’ world, they can be smeared as a “Lefty” group. He proceeds to rubbish their contention that “Children who enter school at six or seven – after several years of high quality nursery education – consistently achieve better educational results as well as higher levels of wellbeing” [my emphasis]. The Young rebuttal considers research from the USA, for starters.

First exhibit in the Tobes testament is the 1960s Perry Preschool Project, which took two groups of three and four year olds from poor backgrounds. One group “received high-quality preschool education” while the other did not. The group that got the good preschool education did better on just about all measures, including a lower rate of crime as they got older.

And, as Jon Stewart might have said, two things here. One, had Tobes bothered to look at the list of signatories for that letter he has been laying into, he would have seen that a double figure number of them are from the USA. And two, what those signatories are urging the Government to consider is the same thing – high quality preschool education – as in the Perry study.

In other words, Tobes is indulging in spin and bluster in order to kick a group that he has decided is a “Lefty” one. His assertion that the “Lefty” group wants to keep children away from school until the age of six or seven is bunk: the letter is clearly questioning the role of “testing and quasi-formal teaching” for such young children. That does not rule out learning in a preschool environment.

So all that Tobes is doing is constructing a giant strawman and then knocking it over while bragging about how sodding clever he is. Well, when you blow three and a half thousand notes on a fridge, self-justification soon becomes a way of life.

Not much use in the continuing debate on education, mind. No change there, then.
Posted by Tim Fenton at 12:58

Great post. The best indicator of the level that Toby is operating at is the best rated comments underneath. These usually consist of people saying "all lefties are scum".

That having been said there are a number of people who go against the grain and post valid articulate counter arguments.s got a good kicking when he suggested that David Frost should have been arrested for the Frost Nixon interview

The Telegraph education pieces have been frequently swampoed by posters who rip the piss out of the biased line and the half wits who post their bile.