Labour And Unions Fight – Or Maybe Not

One attribute possessed by the late David Frost was the genuine interest in what his interviewees had to say, coupled with an ability to let them say it. If only he had been on hand to ask the questions of the Labour Party and Trades Union leadership right now, we might actually find out what was going on between the two, rather than what some pundits and commentators would like us to think. 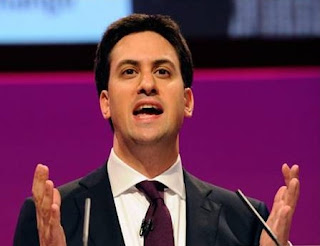 Not surprisingly, the right-leaning part of the punditerati – joined by Dan Hodges, who still believes, unlike almost everyone else, that he is at least “of the left” even though he has left Labour – believes that the game is up for Mil The Younger, he’s weak, weak, weak ((c) Louise Mensch), the Tories can now “finish him off”, and that the TUC gathering is spoiling for a fight.

Iain Martin’s propaganda-to-order for the Telegraph is matched by Dominic Sandbrook in the Mail, whose lame “how high should I jump” copy for Paul Dacre instantly devalues anything else he turns his hand to. “Poor, floundering Mr Miliband may have just signed his own political death warrant”. Yes Dom, like all the other times you and your pals said something similar, and it didn’t happen.

The Mail thinks it can convince its readers of Miliband’s imminent demise by calling up someone who used to be a Labour minister: “'I fear Ed is putting Labour in jeopardy': On the eve of Miliband's crucial TUC speech, a hugely significant intervention by a party heavyweight”, but David Blunkett is a former party heavyweight who isn’t keen on the party’s current leader.

None of these people – plus the inevitable “Dave always wins because Ed is rubbish” drivel from Quentin Letts (let’s not) – actually stop to listen to what is actually going on. If there is some impending schism within the Labour movement, then how did Unite head man Len McCluskey – who must be a baddie because he has a Merseyside accent – look so relaxed on The Andy Marr Show (tm) earlier?

Can any of the pundits lining up to write Miliband’s political obituary set out what his speech to the TUC, and the associated proposals for reforming the relationship between Labour and Trades Unions, contain? No? Thought not. Instead, readers are fed misleading rubbish asserting that the Labour poll lead has fallen to 1% (the poll does not actually ask respondents which party they support – doh!).

Some pundits have short memories: there was a similar welter of adverse comment directed at Tony Blair in the mid-90s, accompanied by heavy promotion of every poll that gave him poor leadership ratings (sound familiar?). The Labour Party is not run on the whim of right-leaning pundits. This is just the usual demonising of the centre-left by those who are frightened of a change of Government next time around.

And they want their readers to be equally frightened. No change there, then.

[UPDATE 9 September 1645 hours: today's Independent has reported that a majority of Trades Union members is in favour of the kinds of reforms set out by Miliband, something that has eluded the right-leaning papers that are talking up the idea that the Labour leader is somehow finished, or will be after the TUC and party conference season are over. 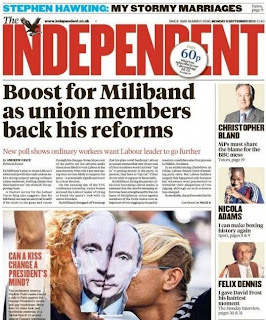 Moreover, the poll carried out by YouGov for Labour Uncut (not Miliband's biggest fans) suggests that, while 4% of voters might be less likely to vote Labour if reforms go ahead, a rather larger 16% would be more likely to vote for the red team. That is the kind of percentage that could turn a close General Election vote into a decisive one.

This is the kind of evidence that shows just how out of touch, and speculative, so much coverage of Labour and the Unions has been recently]
Posted by Tim Fenton at 13:28

Earlier this year the Wisdom Index showed Labour on 32% and the Tories on 29%. Labour went up 2% in June, the Tories stayed the same. Now we see Labour dropping to its position earlier this year and the Tories up 2%. This, according to Hennessy is a moment of enormous political importance. I also see that it's an online poll with, presumably, a self-selected target audience.

ICM say the most accurate result they had for a 'Wisdom poll' was when asking a question at the end of a voting intentions poll during a general election campaign. That's quite a specific set of circumstances which is in no way replicated by the poll published today as far as I can see.