The attack on the Westgate shopping mall in Nairobi has set the press off looking for the usual simple answers, and easy to define villains. So it should surprise no-one that many of them have fixated on the possibility that Samantha Lewthwaite, aka the “White Widow”, may have been present. And, as so often, once one paper runs with the story, the pack mentality kicks in, and they all have to run it. 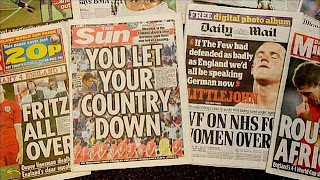 So, while the deeply subversive Guardian cautioned against jumping to conclusions, the Mail had made its mind up: “Terror raid ‘led by white widow’” screamed the headline. This was swiftly followed by “Why the White Widow is prime suspect”, and then the magnificently fraudulent “Has British 'White Widow' been killed in final assault on Kenyan shopping mall? Body of white woman terrorist is found at scene”.

That was all that the Express needed to pile in with its own version of the same story, starting with “Did the White Widow fugitive storm the Westgate mall?”, then “Kenyan massacre: ‘White Widow may have acted alongside Americans’”, “Worldwide hunt for ‘white widow’”, and the supposedly damning “WANTED: Interpol issues arrest warrant for ‘White Widow’”.

The Mirror could not resist the temptation to join in, led by Russell Myers, formerly of the Mail On Sunday, and the hack who entrapped Paris Brown. “'White Widow' Samantha Lewthwaite feared to be behind Nairobi shopping mall massacre” he informed readers. There followed stories about her fake passport, how she was “wanted”, and the “lair” from which she allegedly plotted the attack.

Even the supposedly “quality” Telegraph had to join the herd: “Was July 7 bomber widow Samantha Lewthwaite among Kenya attackers?” it demanded. Then came “Samantha Lewthwaite arrest warrant issued by Interpol” (nudge nudge), and “The ‘White Widow’: the new face of terror”. But there was one teensy problem with all this coverage, and that is that Ms Lewthwaite was not actually there.

We know this as the New York Times has actually been doing some investigative journalism around the story, reporting that “There is no evidence so far, the police and security forces say, that Samantha Lewthwaite ... was involved in the Kenya attack, let alone was its ‘mastermind’”. The Kenyan interior minister, and spokesman for the group involved, both said “no women were involved in the operation”.

But what about the Interpol arrest warrant? “The red notice was issued in response to a Kenyan request concerning events nearly two years ago, not the Nairobi attack”. So the press had been peddling yet another pack of lies all last week, which could have been easily checked by making a few enquiries. On the information currently available, Samantha Lewthwaite was not there. She wasn’t involved.

Still, it fascinates readers and sells more papers, so that’s all right, then.
Posted by Tim Fenton at 10:59

And the Mail has printed a photo supposedly taken in the Kenyan shopping centre, which was actually taken in Florida three years ago.
http://tompride.co.uk/daily-mail-fail-newspaper-uses-false-photo-in-kenya-shopping-centre-article

The Mail also picked up on a story I did Wednesday about the hostages' fate http://paulocanning.blogspot.co.uk/2013/09/the-horrific-truth-of-kenya-terrorist.html

It was odd how long it took for this to surface, and that selected points got left out. In particular that the KDF deliberately blew up the hostages to end their suffering.

Why use her name in English? Isn't she Shefiyah Al Jamal or something?