HS2 – Michael May Get It Wrong

Not all those involved in the transport sector are supportive of the HS2 project, and one Michael May has taken to the airwaves to denounce the exercise in The Engineer, telling that there is nothing to worry about, there is no capacity problem, and there are plenty of far less costly ways of doing what HS2 is intended to do, and without any real disruption. 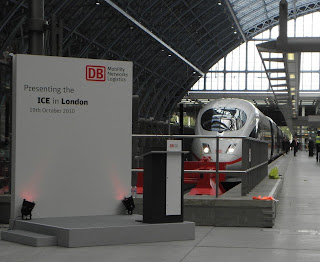 Well, if there’s a better solution, bring it on, say I. So what has May got in mind? Firstly, he claims that Virgin Trains’ Pendolino services only attract an average of 229 passengers at peak times, but then asserts that many of the fleet can seat 589. If the percentage occupancy he quoted – 52% - is correct, his 229 figure is well short of reality. And his statement that an extra coach would add 104 seats is rubbish.

This “peak average” figure is across the whole of both morning and evening peaks along the whole of the trains’ journey. What May fails to mention is that many of them are rammed full for part of their journey, that there is more severe crowding at certain parts of the week, and that many long distance off-peak services leave Euston with standing passengers most days of the week.

He also gets his timeline wrong: the recent step change in the West Coast Main Line (WCML) timetable, which brought three trains an hour to both Manchester and Birmingham, was not in 2009-10. The new service was introduced in 2008. And the small amount of passenger growth in 2012-13 may also have been down to all the uncertainty over Virgin’s franchise (now sorted for the time being).

May’s solution has been put forward before: “The fast commuter capacity on this route can be doubled by building a new flyover south of Milton Keynes and introducing faster rolling stock”. Rubbish. Grade separation at Ledburn Junction will not solve capacity problems: the trains will have to compete for space with longer distance services on the fast lines out of Euston.

“The work required to deliver the above extra commuter capacity would cause little disruption to the WCML. Construction of the flyover near Milton Keynes would be similar to the Hitchin flyover recently completed by Network Rail on the East Coast Main Line”. Bullshit, and no it wouldn’t: the Ledburn work would require slewing of all four existing tracks, and the land take would be significant.

And, guess what? May makes no mention whatever of freight. Heck, even Andrew Gilligan mentioned that, although only in an effort to suggest that rail freight operators were opposed to HS2, which they are not. Then May finishes off by suggesting that infrastructure “in the regions” should be improved instead. Wonderful, we should solve a problem by looking over there.

I’m still waiting for someone to put forward a credible alternative to HS2.
Posted by Tim Fenton at 16:52

He may be correct about spare capacity on some Virgin "peak" hour services. Because Virgin stretched the definition of peak and thus hiked up the fares by by not allowing Off Peak (was Saver) tickets it has created an odd phenomenon of a peak hour crush (season ticket holders who can use any train and business traveller with paid for peak tickets)followed by an shoulder peak lull with the leisure travellers hanging on and causing a later crush. So yes, there is capacity in Virgins definition of peak, but likewise there is overcrowding off peak! And overcrowding in general is being controlled by pricing not by capacity improvements.

Is HC-Midland a serious alternative?

Virgin asked for extra trains to Liverpool and were turned down. And were recently turned down wanting trains to Blackpool. All because near empty trains to and from Manchester are clogging he WCML.