Iain Dale And A Police Caution

Blogger emeritus, radio show host, and lately publisher, Iain Dale has recently secured the rights to Power Trip, Damian McBride’s memoirs of his time in the service of Pa Broon. In promoting the book, McBride was interviewed on camera earlier this week with the Brighton seaside as backdrop, and publisher in close attendance. And the whole episode had a most unfortunate conclusion. 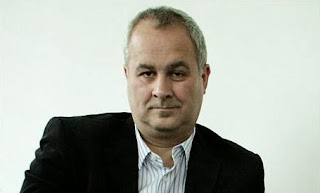 Well-known protester Stuart Holmes worked his way into shot, brandishing his placard. Dale, for reasons known only to himself, took a severely adverse view and attempted to manhandle Holmes out of shot. There followed an unseemly fracas, as publisher and protester ended up in a random heap on the floor. Then Holmes’ dog bit him in the knee, just to make sure.

Initially defiant, and claiming that he was doing nothing more than protecting his author, Dale was later prevailed upon by the Police to return to the seaside, where he was duly nicked. A by now deeply contrite publisher has now apologised to Holmes, McBride, Ed Miliband, anyone connected to the Labour Conference, the TV viewers, everyone at LBC, and of course the dog.


This may be not unconnected to the fact that Dale has also accepted a Police Caution for common assault. Given that video footage of the incident has gone viral, it would have been difficult to mount a denial. At this point, those with moderately long memories may recall an earlier conjunction of “Iain Dale” and “Police Caution”, but in regard not to himself, but Tim Ireland of Bloggerheads fame.

In the run-up to the 2010 General Election, Ireland had attended (by invitation) a hustings event at Flitwick, in the constituency of (yes, it’s her again) Nadine Dorries. He had secured permission from the chair to both film and broadcast the event. Ms Dorries, on establishing his identity, made the false and defamatory claim that he had been “stalking” her (criticising her, yes, but that goes with the territory).

She then pursued the case with the Police, matters concluding when it was found that Ireland had committed no offence. Ms Dorries insisted that he had “been issued with a warning under Section 2 of the Harassment Act”, which he had not. He did not have, and does not have, any criminal record. Iain Dale reported this verbatim. It is still live and easily accessible.

Pursuit of politicians is something that both Nadine Dorries, and Iain Dale, do not find to be a bad thing when their pals at the Guido Fawkes blog do it. Perhaps Dale will, in the light of this week’s events, think again about what he did two years ago. Sadly I doubt that Nadine Dorries, whose recent actions include apparently trying to get Tim Ireland sacked from his job, would be up to such a task.

Accepting a caution is a serious business. Mistakenly accusing others is worse.

[UPDATE 27 September 1205 hours: what Iain Dale did not know was that he had been doomed by The Curse Of Littlejohn's Support. The Daily Mail's tedious and unfunny churnalist  has whined in his column today - clearly written earlier in the week - "what useful purpose does Sussex Plod think might be achieved by bringing possible assault charges against ... Iain Dale, who wrestled a well-known, attention seeking nutter to the ground during a live TV interview?"

He goes on "Can't the Old Bill ... tell the difference between a genuine public order offence and a publicity stunt?" to show that his knowledge of the law is not unadjacent to sweet Jack. But good to see Dicky Windbag calling it wrong yet again. Bad news for Iain Dale, though]
Posted by Tim Fenton at 17:15

Thanks for your support, Tim. Last time Iain Dale saw fit to discuss the matter, he offered to update and correct the post 'when hell freezes over'. He did this knowing that I was receiving threatening messages as a result of the false assertions by Dorries that he did so much to propagate. Nice guy.

>claiming that he was doing nothing more than protecting his author

Dale's got form when it comes to inrventing justifications after the fact.

If the law allowed us to wrestle to the ground well-known attention-seeking nutters there would be a lot of people rolling on the ground in Westminster and outside the offices of many well-known newspapers.

Nadine Dorries does valuable work for instance hinting at les freres Barclay and funding of BNP/EDL types via Monaco;)