Captain Bellend Pisses Down His Leg

Forget fantasy football – the loathsome Toby Young, or to give him his full due, the Honourable Toby Daniel Moorsom Young, has hit upon the idea of fantasy politics, which is, as the name says, fantasy, but may provide an alternative to endless games of Monotony on damp autumn weekends, when pundits find themselves at loose ends and need to convince themselves that someone cares about them. 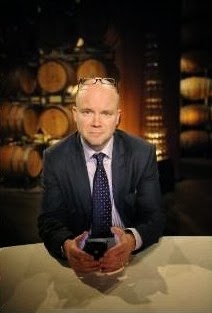 And Tobes’ latest fantasy politics wheeze is to call “Unite the right!”, as if he can declaim a few instances of “Shazam” and miraculously bring Nigel “Thirsty” Farage and his fellow saloon bar proper-uppers back into the fold that is the Tory Party. Sadly, as anyone with a hole in their jacksy knows all too well (except Tobes, of course), this is total crap.

But Tobes has convinced himself, and that is all that matters: “What I have in mind is something bottom-up rather than top-down. A unite-the-right website set up by members of both parties that tells people who they should vote for in their constituency to keep out Labour and the Lib Dems”. Well, neither party leadership will have anything to do with it, but minor point, eh?

But do go on. “Take Eastleigh, for instance, a seat currently held by the Lib Dems. Ukip came second at the by-election last year, so the advice would be to vote for Diane James in Eastleigh because she’s the candidate best placed to defeat the incumbent ... Sceptics will say this example is misleading”. Dead right it is: the two parties would immediately fall out over 2010 versus 2013 vote share.

The Tories were runners-up in Eastleigh at the General Election. They had held the seat for decades before Stephen Milligan’s bizarre demise let in the Lib Dems. So how will Tobes square the circle? “Who will decide which candidate the website endorses? A committee made up of equal numbers from each party”. So it’ll be a fair fight when they fall out after the second pint, then.

In any case, if this is such a brilliant idea (OK it isn’t, but let’s humour Tobes for a moment), why doesn’t Young set up this new website himself? After all, as Political Scrapbook revealed yesterday, he’s a dab hand at web based stuff, having edited his own Wikipedia page some 200 times two hundred times in six years. But he won’t be going there, and it’s blindingly obvious why not.

UKIP and the Tories hate one another. And Farage and his pals take support from a far broader pool than disaffected Blue Team members. This idea is a non-starter. It’s another example of Lyndon Johnson’s characterisation of a speech on economics being like pissing down your leg – it feels hot to the bloke doing the pissing, but nobody else seems to notice.

And right now Tobes is nursing a chapped leg. No change there, then.

[UPDATE 1615 hours: Tobes has been joined in making his clarion call for unity by James "saviour of Western civilisation" Delingpole, who, in that strange form of English used by those right-leaning Clever People Who Talk Loudly In Restaurants, says he is "totally with" his pal on this. 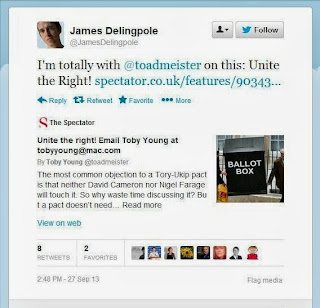 Sadly, as anyone who has suffered the rantings of Delingpole in the recent past will know, he has dispensed so much abuse towards Young Dave, and indeed most of those in the Tory Party, to mean that his advocacy would be little short of poisonous. So that's another damp squib in the making, then]
Posted by Tim Fenton at 13:32

He did tweet a gmail address that he'd set up for 'unite the right' yesterday. No idea if he would be subject to data protection laws in handling any email addresses he came by from publicising that email address because presumably 'Unite the Right' doesn't exist as a legal entity.