When you need a story from the European mainland spinning with maximum shamelessness, there is only one go-to pundit, and that is MEP and occasional Tory Dan, Dan The Oratory Man, who has observed Chancellor Angela Merkel’s victory in Germany’s elections yesterday and proclaimed “A stunning victory for Angela Merkel. David Cameron will be delighted”. 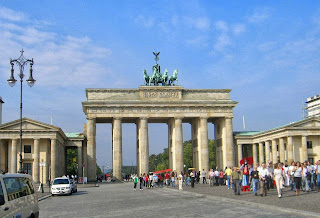 Some of a right-leaning persuasion may be convinced by Hannan’s bluster, but the proclamation is, as so often, not based on much that is factual. “Employment laws were freed up, spending held down, welfare reformed” he claims, and this did indeed happen recently in Germany – under Merkel’s predecessor Gerhard Schröder. But Dan doesn’t mention him, because he’s a rotten lefty.

What Dan also doesn’t mention is that, despite both hope and hype from anti-EU commentators in the UK, the Eurosceptic Alternative für Deutschland party failed to pass the 5% threshold for obtaining seats in the Bundestag. And Merkel has ended up five seats short of following Konrad Adenauer’s 1957 result of getting an outright majority, so will probably go into coalition with the centre-left SPD.

That would be like the Tories going into coalition with Labour, something else that Hannan doesn’t want to talk about. And it gets worse: Merkel is unashamedly pro-EU. The idea that she, or indeed any politician in the mainstream of German politics, would move to distance the country from the other 27 member states is unthinkable. Many of Young Dave’s MPs don’t sing from the same sheet.

On top of that, Merkel is quite relaxed about immigration, a subject where, once again, many Tory MPs, often egged on by the screaming xenophobia of the right-leaning part of the Fourth Estate, are uniformly hostile. Germany welcomes new arrivals with open arms. Contrast that with the shameful (and thankfully short-lived) “racist van” episode recently in London.

And Hannan’s assertion “It's worth celebrating something else. The largest state in the EU has just held a free and fair election”, suggesting that something unusual has taken place, is as bizarre as it is misleading. Despite suggestions otherwise from anti-EU pundits, no member state has delayed the democratic process in the recent past. And German elections have been free and fair for over six decades, thanks.

It’s good that some attention has been paid to German elections, and for that reason, also good to see pundits poring over the results. But as so often, Hannan’s shameless copy leaves out so many of those pesky facts in favour of spin and downright dishonesty. The Germans want the UK to remain in the EU: anyone wanting out will gain no comfort from yesterday’s election result.

But Daniel Hannan can play Let’s Pretend, so that’s all right, then.
Posted by Tim Fenton at 12:22

I wouldn't treat the German election result is a vindication of all things EU. Whenever a single-issue party comes out of nowhere are becomes a serious contender for representation in Parliament, you have to take that very seriously. Just because AfD got 4.7% does not mean the other 95.3% are happy with the EU the way it is - there will be other voters who have problems with the EU but not enough to change their vote from their normal party, just the same as there are many people in the UK who want less EU powers but still don't want to vote for UKIP.

A better indication is the cross-Europe YouGov polls. The last time I checked, the German vote was clearly in favour of EU membership - but we don't know how many of those voters want EU powers increased, decreased, or left the way they are. Outside of Germany, if goes downhill, will only a relatively small margin in France in favour of memebrship.

Then you've got the rise of Syriza in Greece, Five-Star in Italy, FN in France, PVV in Netherlands, The Finns in Finland. Goodwill to the EU is under attack on a lot of fronts. And, so far, I've no no attempt from the EU to try to restore confidence from the public - just blanket dismissals of all dissent as "populism".