There is only one thing worse than being talked about, and all that, but the tendency of the wannabe part of the Fourth Estate to turn the “talked about” into an arms race of blatant invention has clearly tried the patience of Stephen Fry, to the extent that he has passed severely adverse comment on apprentice creep Tim Walker of the Maily Telegraph for being, er, a credit to his paper. 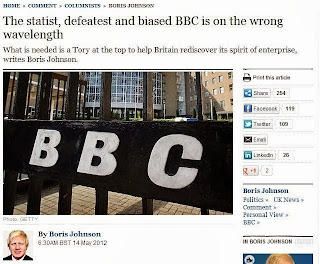 And he does stuff for the hated Beeb, an' all

After all, Walker’s fellow hacks regularly do worse than the malicious nudge-nudgery in which he indulged. So what happened? “Does Stephen Fry write his Tweets?” was the headline, and the obvious corollary for Tel readers is to conclude that he does not. But do go on.

“Although not quite up there with the boy band One Direction, Stephen Fry is nevertheless one of the nation’s most popular individuals on theTwitter social networking website, with more than six million ‘followers’” Walker tells his readers. So it’s an envy trip, then. 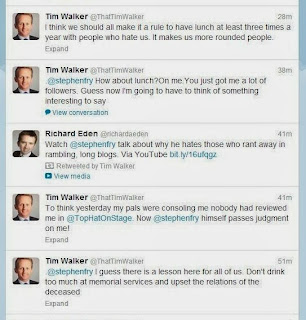 And, as the man said, there’s more: “but I spied him at The Wolseley restaurant in St James’s on Thursday, deep in conversation with Andy Serkis, the actor, who starred as Gollum in The Lord of the Rings film trilogy. I can’t be absolutely sure, but it appeared that Fry was emitting ‘tweets’ as he spoke to Serkis”.

Walker can’t be absolutely sure, which means he doesn’t know, but he’s going to make his accusation anyway. And there is a quite rational explanation: Fry posts charitable Tweets on behalf of others. In other words, he uses that six million following to help a number of good causes.

The timing of such interventions is important, because, as Fry points out, the response could seriously slow some servers: even if only a tenth of one per cent of his Twitter following followed the link, that would be six thousand hits, and most likely within no more than a couple of minutes. 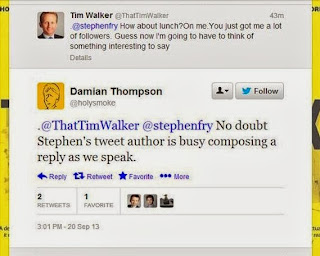 Joke? He certainly is

So Fry takes time out to be helpful, and generously so, and he gets sneered at for it. Then Walker’s fellow creeps pile in, not least Damian Thompson, clueless pundit of no fixed hair appointment, quivering with self-induced mirth as he suggested Fry had a “tweet author” and therefore missing the point altogether. 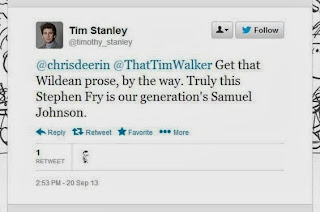 Get that journalistic technique ... if it turns up

Dames’ pal Tim Stanley, who you can tell as he’s a doctor, told “Get that Wildean prose, by the way. Truly this Stephen Fry is our generation’s Samuel Johnson”. Better than being a clueless twat stuck in a rut of recycling right-wing spin from the USA in support of Nile “Chauncey” Gardiner, Stan.

Still, they got themselves a few seconds of recognition, and a nice warm feeling. Pity it came from pissing down their legs, but hey ho.
Posted by Tim Fenton at 18:00

Over on Facebook, John Sturgis find absolute proof of Fry's twattery in all this, thus proving (once again) his own.