London’s occasional Mayor Alexander Boris de Pfeffel Johnson has – unconvincingly – used the latest instalment of his “chicken feed” generator at the Maily Telegraph to tell his adoring readers to look at the Labour Party and Mil The Younger, whom he then compares to Stalin, Ceausescu, Kim Jong-un, and as many other Eastern Bloc and other Communist leaders he can think of. 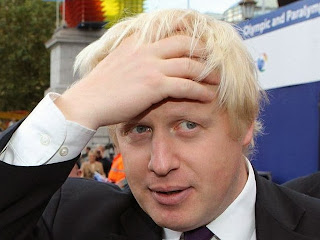 This has resulted from Miliband declaring that he would abolish the so-called “Bedroom Tax”, an act that Bozza has tried to equate to bringing the Securitate to the UK. He must have been kept waiting rather a long time for yesterday’s luncheon. But, as Jon Stewart might have said, two things here. One, Bozza has not always been so hostile to equating his own policies with communism.


You forgot already? Well, just to remind you, here’s Bozza appearing on the Letterman show last year, when he did his usual shameless trick of claiming credit for investment decisions made by Ken Livingstone’s administration (new trains for the Underground and Overground), before proudly declaring that London’s cycle hire scheme was “completely communist”.


Perhaps that was a slip? No, he said it twice more. And he also said they were “free bikes”, the kind of casually issued whopper that Bozza is permitted by a compliant UK media to get away with. Then he said something else to Letterman: that he had restored to the capital the “hop-on, hop-off” bus. Yes, Bozza wants to take credit for the New Bus For London (NB4L) at every opportunity.

But here a problem enters: the NB4L has indeed been through the process of design, development and prototyping, and is now in series production, but it has not been without its faults. Here Bozza has not been so keen to claim credit – or even to admit that problems exist. Inadequate cooling in summer and heating in winter is one drawback. Often unexplained breakdowns are another.

And of course the NB4L is still too heavy to carry its full design load. But the latest problem, which manifested itself while Bozza was digesting that luncheon yesterday, is potentially yet more serious: an almost new NB4L working Route 11 was involved in a serious accident, which appears to have been the result of it being unable to stop, then rear-ending several other vehicles.

Three people have been seriously injured. Two other buses have been damaged, one of them apparently beyond repair. Three cars have been damaged, at least one of them a write-off. The finger of blame is right now pointing at the NB4L suffering a jammed throttle, or equivalent. And where is the man who foisted these vehicles on Londoners? Slagging off the Labour Party. And not being Mayor of London.

He’ll reprise the act next week in Manchester. That isn’t in London, either.
Posted by Tim Fenton at 10:49

Ah, now I've got to argue with you on a point here.


Buses with "fly by wire" throttles failing to stop is not a new problem, it's been going on for years and never gets properly looked at. I can remember a case in Cardiff around 10 years ago when a Scania surged across a junction and took a pedestrian through a shop window. The police were about to prosecute the driver when they found a very similar incident at a bus station in NE England a couple of years earlier. And last week an Alexander Dennis vehicle in Ottawa failed to stop and went through level crossing barriers into the path of a train. NB4L are built by Wrights, so that makes three manufacturers to look into. Or maybe one component supplier. Who knows, road vehicle incidents never get looked at properly - if one train had done that we would know the cause.