When the Daily Mail landed the serialisation rights to Damian McBride’s memoir of his time spinning for Pa Broon, Power Trip, it did not require a knowledge of rocket science to know that the legendarily foul mouthed Paul Dacre would not rest at merely publishing extracts from the book. Here was the perfect opportunity to lay into not just the New Labour years, but today’s party leadership. 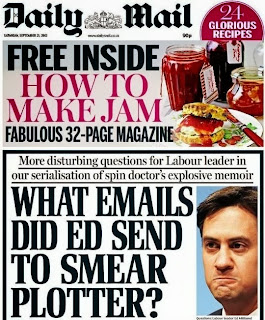 And so it has proved, with today’s front page thundering “What emails did Ed send to smear plotter?”, a particularly ridiculous question, given that those who worked with Pa Broon would have communicated with one another on a whole range of topics. The idea that exchanging emails with McBride equals instant complicity in whatever spin the latter was up to is excessively wishful thinking.

Obedient Dacre attack doggie James Chapman tells “Ed Miliband sent potentially damaging emails to a party official plotting to smear opponents, Gordon Brown’s former spin doctor claims”. And the basis for this is what, exactly? Ah well. That is all bound up in the leak of emails from Derek Draper’s account that led to McBride’s resignation back in 2009.

And, as Jon Stewart might have said, two things here. One, the word that crops up more than once is potential or potentially: Draper is exercising caution, while not being absolutely certain of his recollection. And two, if there had been anything really bad regarding Mil The Younger, it would already have been dropped by the Guido Fawkes blog – which it has not.

Moreover, the idea that Miliband (and “Auguste” Balls), by knowing of McBride’s role, automatically enjoyed his full confidence and were aware of his every move, is pie in the sky. The entire modus operandi of such people hinges on keeping that knowledge to as few individuals as possible. And those who probably knew more than Miliband and Balls were the recipients of the briefings.

So who did Damian McBride brief? Have a guess, James Chapman. Yes, I’m looking at you – and the rest of the Mail’s political hacks. That’s who he briefed. And the same goes for all the other papers. Does Paul Dacre think McBride’s spin got splashed all over those front pages by magic? It got there because the press was complicit in the retaliations, smears and hatchet jobs.

When the Mail loftily talks of “Labour’s squalid past”, the reality is that Dacre’s doggies are participants in yet more squalor: they buy into the spin from all the other briefers, not just McBride. Not for nothing does Roy Greenslade today discuss “Why the journalistic elite is failing to hold power to account”, telling of hacks’ willingness to publish single-sourced leaks to get stories.

Dacre once more ends up in the draughtiest glasshouse. No change there, then.
Posted by Tim Fenton at 12:46

Well, surely the obvious question is why, if spin doctors such as MacBride are known for being economical with the truth, anyone is trusting his account as reliable now.

All MacBride has done is changed his paymaster.

This is one of the better articles on this issue.

Politicians feel that they have to have spin-doctors. Cameron felt that he had to employ Coulson, even though he knew that Coulson had given Jonathan Rees a job at NI and he knew the background to Rees' case. Even Michael Foot said that he wished that he had had a spin-doctor.