Rail staff venture on to the tracks and are then disciplined. Does this sound familiar? Zelo Street regulars may recall the sad tale of one Ian Faletto, who was dismissed by South West Trains (SWT) in 2011, to the initial disgust of the Fourth Estate, which then went quiet after SWT stood its ground and Faletto withdrew from taking the case to tribunal after being told he was going to lose. 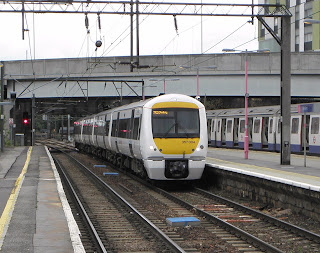 A c2c train pauses at Barking

So when an employee of train operator c2c was suspended after venturing on to the track at Southend Central station, after a wheelchair bound passenger had rolled off the platform, the reporting was a little more cautious – well, in the Mail and Telegraph, anyway. “Railway worker suspended after rescuing disabled woman” was the latter’s rather sober take on the story.

The Mail was somewhat more dramatic, proclaiming “Rail worker suspended.. for saving woman's life: Hero 'broke safety rules'”, but there has been no punditry in support this time. Someone may also have thought through the case, considering, for instance, that all passenger trains passing through Southend Central stop there, and that there are procedures for stopping trains already en route.

But one paper is desperate enough to champion the case: step forward the Daily Express, where former editor Peter “Mentally” Hill, he of the ultimate Diana and Maddie obsession, has got ahead of himself. “Health and safety reward bravery with the sack” he declared, although nobody has been sacked. But it is the photo howlers where the Express surpasses itself (and not for the first time). 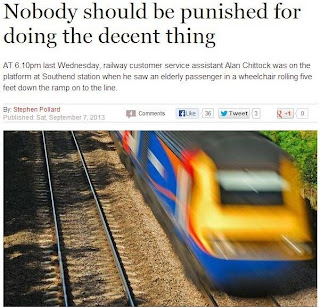 First comes Express Comment, telling readers that “Nobody should be punished for doing the decent thing”, illustrated not with a photo of a c2c train (you can see that between the first and second paragraphs above), but one that runs somewhere that doesn’t have electrification – between London and the East Midlands, in fact. But at least it’s in the UK. 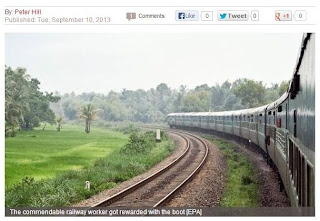 Moving right along to Hill’s tirade, we find another photo of a train running somewhere that doesn’t have overhead wires. And that track gauge looks a bit too wide for the UK. The train is at least three coaches longer than the longest you will find on c2c. And what’s with the bars on the windows? The scenery looks not only green, but lush and even tropical.

That, Express people, is because it is tropical: you’ve included a photo of a train somewhere in India (hence the broad track gauge, window bars and the rest). That tops the use of Earl’s Court underground to illustrate a story about a signalling centre fire alert at Three Bridges, and by some distance.

But it was no doubt cheap and available, and in Express land that can mean only one thing: another Benchmark of Excellence!

[UPDATE 11 September 1330 hours: as readers who look in on this blog's comments, and those who read the Southend Echo, will know, the rail worker concerned, Alan Chittock, has been reinstated after the incident at Southend Central was investigated. He was given a verbal warning, as the correct procedure would have been to call the signaller first, this being the most effective way of stopping trains in the area.

My thanks to Carl Eve, stalwart of the Plymouth Herald, for the heads up. The nationals have now chipped in, proclaiming that this is "A victory for common sense" and once again overusing the word "hero". What it was really a victory for was the railway adhering to procedures that have been established over decades of operation, and making sure staff know how to proceed in future.

At least the Express was no longer trying to illustrate its copy with a photo from India this time. Small mercies, and all that]
Posted by Tim Fenton at 12:56

From the Mail article "It is not clear whether it could have been stopped in time if the woman had not been rescued". Why not? It's easily checked.

Gentlemen, ladies, I would suggest you go to the source of these stories (keeping in mind most nationals happily nick from the regional, then put their own reporters name on the story...)
Look - a happy ending! http://www.echo-news.co.uk/news/10666394.Rail_worker_suspended_for_rescuing_woman_is_reinstated/
Carl

And this adds some information as well about the rail worker...
http://www.echo-news.co.uk/news/10663183._Don_t_sack_hero_rail_worker__says_mum_of_boy_he_crashed_into/?ref=mr

Hmm, the Echo article seems to be over-egging this one as well. Basically it has already been said that sacking is not on the cards and that the minimal sanctions are expected. I presume this will be to explain that he should have made sure teains were stopped rather than jump on to live tracks where there would be a risk of two fatalities as a worst case scenario. It really doesn't take long to put through an emergency call. Basically the employee has been given a couple of weeks paid suspension pending investigation where te result will be at most re-training in emergency procedures.

just back from hols. What did the Mail do to follow up the police investigation into the possiblity that the woman had been deliberately pushed?