Hardly had I declared the loathsome Toby Young to be utterly delusional than he confirms the fact by demonstrating that he does not understand the difference between UK and USA, between payment for information and payment for appearance, and between straightforward journalistic practice and forthright corruption of public servants. 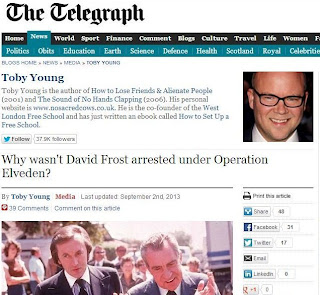 Tobes is unhappy about the way that the deeply subversive Guardian has seen fit to lavish praise on the achievement by the late David Frost over his series of interviews with then former US President Richard Nixon. He thinks that this constitutes payment to public officials, the kind of thing that has got rather a lot of Rupe’s downmarket troops from the Sun into hot water recently.

So, by the process of his own unique logic, Tobes can’t see why Frostie didn’t get his collar felt as part of one or more of the current series of Police operations. So let me put Michael “Oiky” Gove’s head of polecat reserves straight: first, Tricky Dicky was a US Citizen, and Frost did the deal through a US company. So it’s got bugger all to do with anyone in the UK, for starters.

Second, Nixon wasn’t being paid for information, but to take part in a series of interviews. He could manage that without passing any sensitive information to his interlocutor. And third, this was no more and no less than an exercise in investigative journalism, that commodity which an increasing number of newspapers, including the Maily Telegraph, find it difficult to deal in nowadays.

Whatever Tricky Dicky was, he wasn’t a cop. All of which may explain why I’ve taken a screen grab of the post, on the grounds that the Telegraph may pull it out of sheer embarrassment following all Tobes’ howlers. Of course, he might have been trying to be ironic. Which would explain all the egg on his face, and even more derision than usual from the commenters.

Never mind Tobes, back to pretending that “Oiky” Gove is the most wonderful thing ever to happen to the education system since time began, eh?

[UPDATE1 3 September 1130 hours: both Tobes and his boss at Tel blogs, Damian Thompson, passed severely adverse comment on this post yesterday evening, while not addressing the points made (no change there, then). But they would do well to see the avalanche of hostile comment before kicking others. 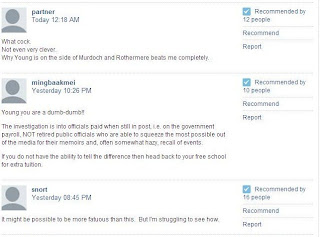 Indeed, there is no shortage of those setting Tobes straight on his clueless rambling, and many have been recommended by a double-figure number of fellow commenters. 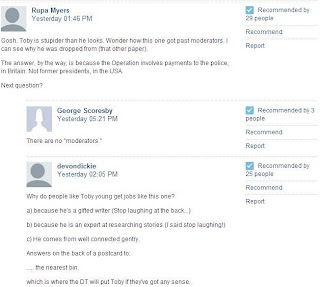 Yes, even among a population which is generally rather more right-leaning than those contributing posts, there has been hostility and ridicule. Sadly, Tobes and Dames would rather lash out at those who point out their residence in a very draughty glasshouse, rather than getting the repair men in. As you wish, lads]

[UPDATE2 3 September 1800 hours: Tobes has now updated his post with a paragraph that begins as follows: "This post wasn't intended as a criticism of David Frost". Well, that's all right then, because my filleting of it isn't assuming that in any case.

Tobes still cannot get his head round the difference between paying a former President to appear in a series of interviews, which is not an offence in the jurisdiction in which it happened, and Police officers divulging confidential information for money, which is against the law in the UK - where it has been happening.

The comments below his article are well-deserved.

I've got a theory that a lot of journalists actually think laws on bribing public officials should not apply to them. I can understand why some people might argue that the Police over-reacted after hackgate and arrested too many journalists on insufficient evidence, but people like Young and Murdoch are going further - I honestly believe what they really mean is that there's nothing wrong with bribery if you're a journalist, even though the law is clear this is a crime and journalists are not exempt.

And the freedom of the press argument might have held some water if they did this to, say, expose corruption in public life. Instead, they seem to exclusively use this to publish intrusive stories on murder and terrorism victims, so I've no sympathy whatsoever. The fact that people are attempting to equate this with one of the most important (and 100% legal and above board) interviews in the history of journalism shows the mindset we are dealing with.