Croydon Tram Smash - What We Know

The first fatal passenger accident on a tram network in the UK since 1959 - well, there haven’t been many tram systems operational for most of those years - happened early yesterday morning when a vehicle on the Croydon network derailed and overturned close to the Sandilands tram stop. Thus far, seven people have lost their lives. What caused the derailment appears straightforward. The unanswered question is why. 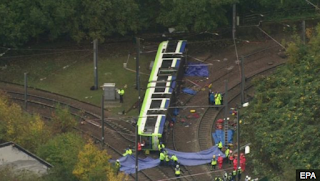 Croydon’s tram network uses the alignments of previously abandoned heavy rail lines, routes that used to be part of the national rail network. Wandle Park to Wimbledon is one such; parts of the New Addington and Beckenham Junction lines are another. The tram that derailed had left New Addington terminus at around 0600 hours and was apparently well filled with commuters. It had just left the Lloyd Park stop.

Between Lloyd Park and Sandilands, the line uses a previously abandoned tunnel. The alignment is straight, and trams routinely achieve speeds of around 50mph there. But almost as soon as they exit the north end of the tunnel, they must slow to just 12mph for the sharp curve that takes them off the former heavy rail route, and up to Sandilands. 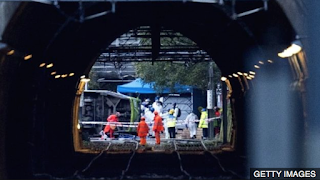 The first photo, showing the tram on its side, is looking to the south east. The tram would have appeared at top right of that photo, then should have taken the curve and exited the frame at bottom centre. Early speculation that the points may have had something to do with the derailment is incorrect: the tram did not get that far. The second photo, looking from the tunnel, shows why the tram needed to slow down before exiting it.

What caused the derailment appears to be a straightforward case of excessive speed. The tram failed to slow down for the curve; the deaths and injuries were the inevitable result of a busy service combined with bodies and belongings being thrown around as the tram overturned, coming to rest on its side. Reports, more or less, confirm this.

The BBC told that “The tram driver, 42, from Beckenham, has been arrested on suspicion of manslaughter … British Transport Police said they were investigating whether he fell asleep … The Rail Accident Investigation Branch (RAIB) said the tram was travelling at a ‘significantly higher speed than is permitted’”.

And the Guardian confirmed “Survivors of the accident said people went flying as the tram left the tracks … Some passengers said the driver of the vehicle, who was arrested afterwards, had blacked out”. So why did the tram not slow down?

Had the driver been incapacitated, there is a “deadman” device which, if released, would apply the brakes automatically. But if the driver merely froze and maintained the pressure on the deadman device, there would be no intervention. Whether the lighting in the tunnel had any effect on the driver will be another potential factor to consider. One reason to look at that as a possibility is that there had been a similar incident very recently.

But that is for the RAIB to consider. Meanwhile, don’t worry about boarding a tram - one fatal accident after a 57 year gap suggests it’s a very rare occurrence.
Posted by Tim Fenton at 12:55

"The first fatal accident on a tram network in the UK since 1959..."
Is not strictly true, there have been some pedestrians that have been struck by trams with fatal consequences. I think that since its opening in 1992 there have been about 6 fatalities on Manchester's system.

Technically the Manchester trams were struck by pedestrians. Unlike motor vehicles (or even bikes) trams stick to a course and therefore do not strike people who were in the correct place. If someone wanders into the path of a tram it isn't really fair to question tram safety since that person would be equally like to wander in front of a bus or lorry or bike.

But in this case there is a big question about safety. To have a location where a 75% reduction in speed is required or disaster will ensue and to have no failsafe would be completely unacceptable on railways. The railway TPWS system could have been used here relatively cheaply to check speed. Hopefully RAIB will consider this and report -otherwise trams will be as dangerous as motor vehicles.

One human factors thought that struck me, similarity here with the Moorgate Tube Crash, driver not responding after passing through dark / tunnel with lights on.