The judgment handed down by the High Court today, asserting that Parliament is Sovereign, has not merely upset those who campaigned for Britain to leave the EU, but has also incurred the displeasure of those who occupy the Northcliffe House bunker. The Mail’s rapid response unit went into overdrive as soon as the court’s decision was known, deploying sneers and smears against anyone they deemed Not Their Kind Of People. 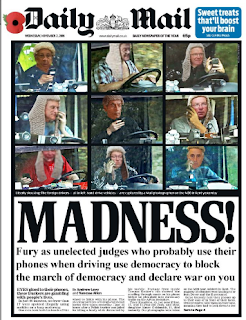 Readers were immediately told what to think: “Judges trigger major constitutional crisis as they deliver 'slap in the face' to Theresa May by ruling MPs MUST be given a vote on Brexit but ministers vow to overturn controversial decision”. Asserting Parliamentary Sovereignty is not a “constitutional crisis”. But do go on.

“Amid fury over a 'power grab' by the judiciary, the PM vowed to appeal against the dramatic High Court defeat - insisting she would not let the decision 'derail' the process of cutting ties with Brussels”. There was no power grab, merely an interpretation of the law. But it was for those who brought the challenge that the Mail reserved its greatest ire.

There was more in this vein. “Nicknamed 'Mrs Wham Glam' by friends, she  has now been branded 'woman of the century' by Remainers who cheered her on the steps of the High Court today” [all very bad indeed]. “Mrs Miller, who voted Remain, brought the case with the help of a Portuguese hairdresser called Deir Santos because the Brexit vote on June 23 made her feel 'physically sick’” [unpatriotic foreigners = maximum bad]. Plus there was “Their high-powered team of lawyers”. Like the kind the Mail uses, you mean.

Then it was the judges’ turn for a kicking. “The judges who blocked Brexit include one who founded a EUROPEAN law group and a second who charged the taxpayer millions for advice” thunders the headline, unaware that nothing has been blocked. But there was more: “The unelected trio, three of the most experienced members of the British judiciary, were today accused of 'striking down the will of the people to set in train leaving the EU’”.

“Lord Thomas was a founding member of the European Law Institute” [bad]. “Master of the Rolls Sir Terence Etherton, 65, is the second most senior judge in England and Wales”. But wait for it: “He made legal history almost a decade ago when he became the first openly gay judge to be made a Lord Justice of Appeal, and is a former Olympic fencer”. Gay. In the judiciary. They get everywhere. Olympic fencers, I mean.

There was more. “Lord Justice Sales, 54 … was criticised for charging the taxpayer £3.3million in his first six years in the job from 1997”. Totally bad. In the meantime, Gina Miller has attracted shedloads of racist abuse and even death threats. Not that the Dacre doggies care about that, and, besides, nobody will stop them.

The Mail is on the verge of eating itself. With any luck it will succeed.
Posted by Tim Fenton at 16:33

Bloody foreigners, coming over here, using our scrupulously fair British laws in a British court to assert the right of British Parliament to undo the law it made 44 years ago. It's against our yuman rights, I tell you!

The Mail's 'rabid' response unit I think you mean, Tim.

I contributed to the campaign (full disclosure- I thought it was a good way of putting a spoke in the wheel of Brexit, but was also impressed by the arguments of the claimants), and I received updates during the hearing. What became very clear was that the government's case was very thin, and poorly-argued- comments during the hearing was that several judges were 'visibly surprised' by the government's arguments. The High Court's ruling, then, reflects more on the poor quality of the government's case rather than a desire to frustrate the process.

In addition, a BBC article last week: http://www.bbc.co.uk/news/uk-politics-37779452 suggested that the court was '60-40 in the government's favour', which doesn't suggest any inbuilt bias.

"The Mail’s rapid response unit went into overdrive as soon as the court’s decision was known"
Or possible before, as they's anticipated. I would have thought that the references to using mobile phones while driving might be libel or contempt of court.

Tim, is your article using a fake image of the Daily Mail front page? As far as I can tell, the genuine one appears here, where did you get yours? http://www.thepaperboy.com/uk/daily-mail/front-pages-today.cfm?frontpage=48513 .

Mind you, Poe's Law applies because I could entirely believe the fake could have been genuine.