The Liverpool Echo is one of those evening papers that defines the area it covers, gives outsiders the authentic voice of Merseyside. The Echo was supportive of the Hillsborough families from the very start, right through to the new inquest verdicts. It has also accurately reflected the revulsion of many in Liverpool at the antics over the years of the Murdoch Sun. And it has caused considerable discomfort to new UKIP leader Paul Nuttall. 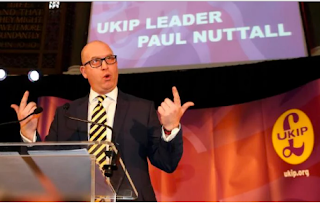 Ullo Nige, got a new motor?

Nuttall sets great store by his Merseyside origins, specifically that he hails from Bootle, immediately to the north of central Liverpool, and that this makes him an authentic Scouser. However, and here we encounter a significantly sized however, the enthusiasm for Nuttall as a representative of Liverpool is not shared by many of his fellow Scousers. 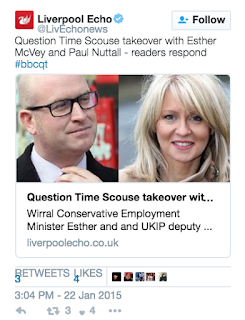 Indeed, when BBC Question Time featured both Nuttall and the equally appalling then Tory MP Esther McVey, and the Echo live-blogged the event, one particular Tweet set in train a Meme that has endured. After the Echo Tweeted “Question Time Scouse takeover with Esther McVey and Paul Nuttall - readers respond”, Tweeter @lipglossjill snapped back “they're not proper Scouse one’s a horrible Tory wool the other’s a bad Bootle UKIP meff”. 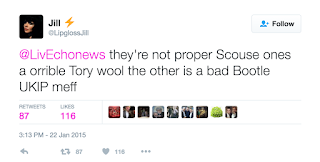 For those not familiar with the Merseyside vernacular, “wool”, short for “woolyback”, means someone from out of town who merely pretends to be Scouse. And as for “meff”, well, here’s the Urban Dictionary definition: “n. Derogative. Meff is to describe an alcoholic homeless person, or a 'tramp' who lives in a house … The word first originated in Liverpool, England, where it is still used as an insult”. 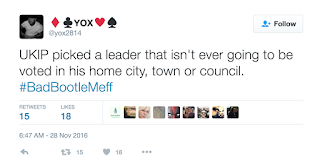 Nuttall went ballistic at being characterised as a jumped-up tramp, perhaps because that reinforced the comparison between him and Eddie Hitler, the Adrian Edmondson character in the nihilistic sitcom Bottom. The Echo reported “UKIP MEP Paul Nuttall brands BBC Question Time reaction ‘appalling’ … Bootle politician hits out after ECHO readers after being referred to as a 'bad Bootle UKIP meff’”. 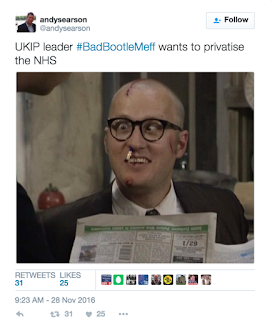 In any case, it was too late - the Meme has stuck with him, and after he was declared the new leader of UKIP yesterday it was out in force, including “Nuttall. You've been disowned by the Scousers. You're just a #BadBootleMeff”, “UKIP picked a leader that isn't ever going to be voted in his home city, town or council. #BadBootleMeff”, and “UKIP leader #BadBootleMeff wants to privatise the NHS” (with Eddie Hitler photo). 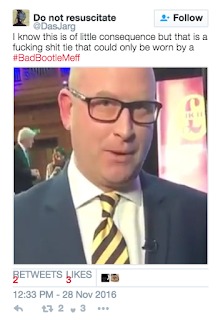 There was more: “Wish news channels would stop saying ‘Liverpool born’ about the #badbootlemeff - it's not something we're proud about”, “I know this is of little consequence but that is a fucking shit tie that could only be worn by a #BadBootleMeff”, and “.@paulnuttallukip If you had 17 Euros for everyone who voted for you... your party would still be up to its knackers in debt. #BadBootleMeff”.

Paul Nuttall is now, in the minds of many voters, the northern embodiment of Eddie Hitler. And he’s a jumped-up tramp. Never was the Bad Bootle Meff moniker more deserved.

[UPDATE 30 November 1335 hours: Nuttall's first Little Local Difficulty appears to be a photo that has been circulated by the EDL News Twitter account (an account that is not pro-EDL, by the way). 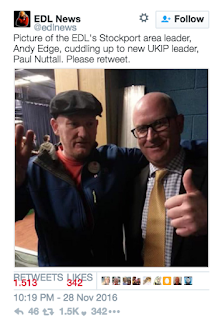 I'm sure there is a perfectly reasonable explanation for this. So let's hear it, eh Are Paul?]
Posted by Tim Fenton at 10:27

Meanwhile, out there in the real world:https://off-guardian.org/2016/11/29/statement-for-a-standing-plan-b-in-europe/

€17 per vote? he'll need a damn sight more than that once the EU Auditors have clawed back all the grants that were illegally spent! He'd better have the approval of the Bank Of Aaron.

At least Eddie hitler was funny

If we're going to do this knockabout stuff we might as well extend use of classic Liverpool picturesque colloquialisms to others.

What about "Bad Murdoch meff," or an even more pungent "Bad cockney cunt" for Kelvin MacKenzie?

In this context both seem perfectly justified.

Bespectacled, Right-leaning, Europhobic bald chap prone to shooting his mouth off online and in print; never see him and Toby Young in the same room, do you? Just saying like....

I had enough when Esther McVile was shooting her gob off, and now as a former resident of Bootle and ex-pupil of Bootle Grammar School for Boys I hang my head in shame at the appointment of Nuttall to the post of UKIP leader. Any party leader who would like to throw Nicola Sturgeon under a hunt horse on Pankhurst Day can't be taken seriously. Farage failed 7 times to get into Parliament - what chance Nuttall? He'll get no votes on Merseyside for sure. Sorry Paul, there's nothin' down fer you, lar.