Now relocated from LBC to Talk Radio, occasionally in print in those reassuringly right-leaning papers that want to hear what she has to say, and still inexplicably allowed a platform by the BBC and other broadcasters, wilfully misinformed pundit Julia Hartley Brewer has made no secret of her fervour for Britain departing the EU. Her problem, as shown once more today, is that she has little idea what this might entail. 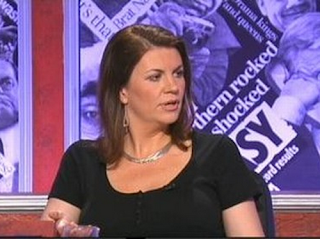 Stick to facts? How very DARE you!

Ms Hartley Dooda has taken the news that British citizens living in other EU member states will not have their right to remain there confirmed, before the start of those negotiations which follow the triggering of Article 50 of the Lisbon Treaty, particularly badly. In doing so, she has taken it upon herself to find a suitable ghastly foreigner to blame for her confused state of mind, and concluded that it’s The Krauts Who Done It.

Armed with this unique finding, she took to Twitter to tell anyone prepared to listen that “Merkel is happy to welcome 1mill Syrians to Germany but not to guarantee Britons a life there. I think that tells us all we need to know”. Bzzzt! False equivalence. Worse, she manages not to realise that those negotiations have yet to start.

But that was no obstacle to her remaining as badly informed as possible, and to double down, she swiftly declared “I have a funny feeling that many Germans may feel rather differently though. So much for European ‘friendship’”. Ah yes, all those silent voters who don’t approve of all those refugees. Sadly, as was pointed out to her, Angela Merkel’s popularity is, despite her eleven years in office, at around 71%. That means Ms Hartley Dooda is plain flat wrong. And she still hasn’t addressed the real issue. 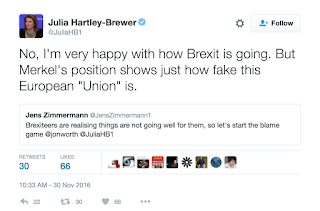 Not only that, she was going to make damned sure she kept Looking Over There. After the suggestion was made that not everything in the Brexit garden was quite as rosy as advertised, she snapped back “No, I'm very happy with how Brexit is going. But Merkel's position shows just how fake this European ‘Union’ is”. It shows nothing of the sort - the real reason for the uncertainty is not the EU, but the UK’s imminent departure from it. 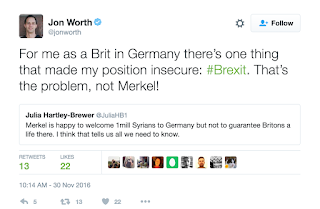 That point was then made plain to her by Jon Worth, who is a British Passport holder who lives in, and works out of, Berlin. He put the point directly: “For me as a Brit in Germany there’s one thing that made my position insecure: #Brexit. That’s the problem, not Merkel!” Merkel cannot say what the UK’s final status will be, and so cannot make any offer. 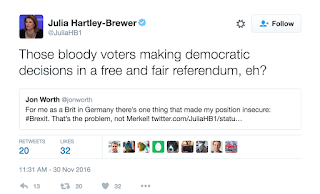 This met with the stern disapproval of Ms Hartley Dooda, who was once again determined to ignore the fact of the matter and deflect elsewhere: “Those bloody voters making democratic decisions in a free and fair referendum, eh?” So let’s take this nice and slowly, shall we? The status of EU nationals in the UK, and UK nationals elsewhere in the EU, is unchanged, but what it will be after the Article 50 negotiations is not known. So no-one, not even Angela Merkel, can give guarantees to anyone - yet.

If Julia Hartley Brewer is unable to grasp that straightforward point, one has to assume she is just being wilful. After all, she isn’t stupid - if she was, they would’t have her on the telly so often. Or something like that. I’ll just leave that one there.

[UPDATE 1605 hours: David Allen Green at Law And Policy has tried his best to point out the obvious to Ms Hartley Dooda, but sadly she was not listening. 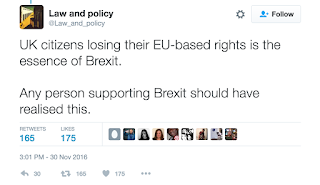 After he asserted "UK citizens losing their EU-based rights is the essence of Brexit ... Any person supporting Brexit should have realised this", she maintained her previous level of wilfulness. 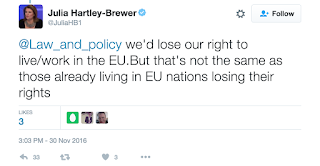 She countered "we'd lose our right to live/work in the EU.But that's not the same as those already living in EU nations losing their rights", but sadly for her, that is exactly what it is. 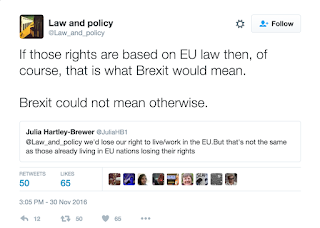 Allen Green had to point out "If those rights are based on EU law then, of course, that is what Brexit would mean ... Brexit could not mean otherwise", thus demonstrating that Ms Hartley Dooda has been shooting from the hip without first doing her homework.

Julia Hartley Brewer appears surprised that rights based on EU law might be lost if a country ceases to be an EU member state. One can only wonder what else that should be on the Bleeding Obvious List is going to prove challenging for her. And her fellow Brexiteers]
Posted by Tim Fenton at 13:00

Julia Hartley-Brewer has made a concerted effort to be clueless in the last year. She reflects many people who are allowed a public say yet know nothing about the subjects discussed.

Remember her disgusting dismissal of homophobia as a part of the Orlando shootings, flat out refusing to acknowledge it? Or her attempts afterwards to slander and attack Owen Jones for daring to walk out of the segment?

Perhaps the disgusting nature of Hartley-Brewer should be recognised more by the media who seem all too willing to ask people about a subject they know nothing about.

It's a bit fucking hypocritical of a Brexiteer, after repeatedly refusing to offer any guarantees on the rights of EU citizens in the UK (and further, referring to them as one of their trump cards in negotiations) to expect EU countries to turn around and blithely make the kind of guarantees they're so unwilling to make.

But then Brexit has always been about selfish entitlement

It symbolises exactly what is actually wrong with British society at the moment - the self deluded, self agrandising and most of all self righteous narcissists that are the Brexiteers will not accept a scintilla of responsibility for the cataclism that they have plunged GReat BRitain into .....

I hope you were being sarcastic with this, Tim: "...inexplicably allowed a platform by the BBC..."

This is the BBC of Robinson, Neil, MacKenzie, Marr, Pienaar, Kuenssberg, Paxman and other assorted righties, plus Christopher Francis Patten, Baron Patten of Barnes, CH, PC.

Please tell me you were kidding. Or pissed when you wrote it.