As the BBC has reported, “Buckingham Palace is to undergo a 10-year refurbishment costing the taxpayer £369m, the Treasury has announced … The Queen will remain in residence during the work, to begin next April … Ageing cables, lead pipes, wiring and boilers will be replaced, many for the first time in 60 years, owing to fears about potential fire and water damage”. So who is footing the bill for this work? 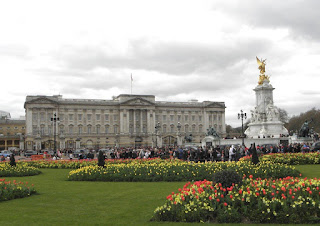 You need to ask? “The works will be funded by a temporary increase in the Sovereign Grant, as recommended by the Royal Trustees, who include the prime minister and chancellor … This funding change will require MPs' approval … The Treasury said an ‘urgent overhaul’ of the palace was needed to prevent the risk of fire, flood and damage to both the building and the priceless Royal Collection of art belonging to the nation”.

And it might burn down, too! “Pointing to the damage Windsor Castle had suffered from a fire in 1992, the Treasury said: ‘The restoration took more than five years, and it is estimated that similar damage to Buckingham Palace could cost up to £250m for a single wing”. So who is going to sound a dissenting voice at this largesse?

The perpetually thirsty Paul Staines and his rabble at the Guido Fawkes blog think they know the answer to that one. After telling their readers “The taxpayer will foot the bill for a £370 million makeover of Buckingham Palace over the next ten years”, the Fawkes folks conclude “Guido has asked the staunch republicans in the Labour leader’s office if they will be standing up for the taxpayer”. And to that I call bullshit.

As The Great Guido knows all too well, there’s only one group in the UK dedicated to being hot on Government waste, and hot on the causes of Government waste, and that is their pals at the so-called Taxpayers’ Alliance (TPA). Heck, if the TPA are going to come down on the Government of the day like the proverbial tonne of bricks over £30 million in payments to consultants, they’ll want to say something about £369 million of spending.

So what is the TPA saying about the Buckingham Palace restoration? Do they have a lower cost alternative? A private sector solution? A demand for an inquiry, or that the Royal Family source more of their costs from their own resources? In a world where hundreds of thousands will spend the Christmas period depending on visits to food banks, you would expect the self-appointed champions of the taxpayer to be on the case.

But the TPA also depends on the right-leaning press to give them an outlet for their propaganda. And those papers are fiercely royalist. So they keep schtum when the public spending is on the Royals, as they did over the 2011 Royal Wedding: a day’s loss of productivity to a strike would turn them apoplectic; a day lost to Royalty getting hitched was just fine. The new twist is they get the Fawkes rabble to should “look over there”.

The self-proclaimed small state brigade are spineless cowards. So frit of offending the press that they abandon their high principles on the spot. Another fine mess.
Posted by Tim Fenton at 16:19

Not quite as lacklustre as their views on the cost of Thatcher's funeral, but still....

£369 million? Bargain, just over a week's contributions to Johnny Foreigner and his mob in Brussels.

You do realise that if we had a president, they and their family would still be living in Buckingham Palace?

Cheshire East Council/ Network Rail claim to have spent £6.5 million on the overgrown bus shelter that is the new side entrance to Crewe railway station. The Palace bill looks a bargain in comparison!

The present residents of Buckingham Palace move out into a property they actually bought with their own money earned from an honest job of work useful to society. The whole building is converted to a Museum of Unelected Hangers On and Human Leeches. The former residents could then relocate to, say, Sheffield or Newcastle where they could look for work that doesn't involve "zero hours contracts" (read: welt or lump casual work). When the "contract" runs out they could live off the dole like others in a similar position.

None of this will happen of course. But that's inevitable in Britain 2016. This country doesn't do democracy and fairness - it's far too busy promoting spivvery, thieves and war.