After the untrue and malicious smear of Labour leader Jeremy Corbyn on Sunday, claiming that he had “broken into a jig” en route to the Remembrance Day commemoration at the Cenotaph, much adverse comment was passed on the Twitter fantasist who runs the @politicalpics account. It has become clear that this is not the first blatantly untrue and clearly malicious smear this account has pulled on Jezza recently. 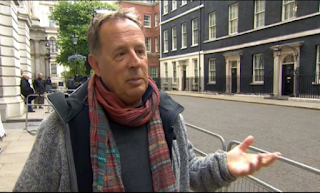 Steve Back - an unreliable fantasist

The presence behind @politicalpics has been identified as one Steve Back, who was featured by the Independent back in 2010. As a regular in the Downing Street press pen, he was taking advantage of a “growing list of visitors to Downing Street who he has captured revealing sensitive - and sometimes top secret - information by leaving documents on display in apparently blissful ignorance of the fact that they are outside the world's most closely-scrutinised front door”. Why was this happening now?

“It is all down to digital technology. Images come out so sharp now that you can read detail that film cameras simply could not pick out. I would say I see a minister carrying readable documents once a month”, he explained. The article added “He is, after all, a west London magistrate when not stood outside No 10 - and does not like being photographed himself”.

That’s doubly unfortunate, as not only is his suitability as a magistrate being comprehensively shredded by his own disgraceful behaviour, but Zelo Street also has the pleasure of showing everyone a recent photo of Steve Back, whether he likes it or not. It can also be revealed why neither the Mail, nor the Sun, nor indeed anyone else, should have believed what he was spinning on Sunday without a reliable second source. 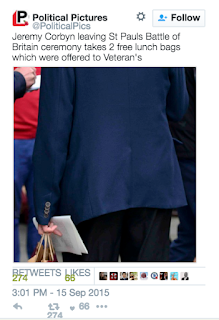 It was such a blatant smear that the perpetually thirsty Paul Staines and his rabble at the Guido Fawkes blog, after running a post titled “Corbyn And Watson Accused Of Taking Sandwiches Meant For Veterans”, updated that post to show that the Costa Coffee staff handing out the bags had offered them to the Labour leader and his deputy - concluding “Guido apologises to Mr Corbyn and Mr Watson for any embarrassment caused”.

As the Independent reported, “Claims that Jeremy Corbyn stole sandwiches meant for veterans at a Battle of Britain memorial service have been proved to be incorrect … The [Costa Coffee] volunteers had even posed for photo with Mr Corbyn, who they seemed quite fond of”. That might explain why the Fawkes blog steered clear of Back’s latest fantasist drivel - as every news outlet in London will from now on.

Steve Back and his @politicalpics account cannot be trusted to tell anyone the time of day. And a fantasist like him should not be let anywhere near the magistrates’ bench.
Posted by Tim Fenton at 16:16

The Corbyn smears will of course get much worse.

Back lives on the tip of an iceberg. Clinging to the underside of it are other corrupt jobsworths like Mackenzie, Neil, Bradby, Frei, Hilsum, Marr, Snow, Robinson, Esler, Miller, Rugman, Dacre, Gallagher, Kavanagh and a whole host of other media plankton. All of them are held in total contempt by what's left of free-thinking citizens.

And you wonder why this country is owned and run by rotten to the core liars, thieves and warmongers?

Interesting to note that he also doesn't seem to understand the principle of cameras - noting that he thinks clarity of pictures is down to the digital era. This is demonstrably untrue, as digital pictures taken at the same magnification as film pictures will never be as clear (digital images are composed of pixels, whereas film is not. This is why it's easy to convert movies shot on film to HD, but not so easy for digital films where the resolution is set at filming). If he's talking from personal experience then he probably used film cameras with poor lenses, as the lens is the bigger factor in whether an image is sharp.

Not exactly showering himself in glory, is this "photographer"...