As if resurrecting the non-existent Blog Complaints Commission last week were not a sufficiently misguided act of stalking and harassment - sending an anonymous and unsolicited “we know where you live” letter to my house - the inadequate saddo behind this illegal campaign has reprised his act (the saddest specimens are inevitably male) and sent yet another missive, which is once again displayed as part of this post. 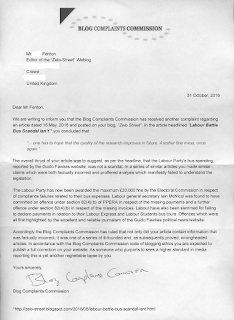 This mythical organisation once again attempts to upbraid me because of a post which passed adverse comment on the perpetually thirsty Paul Staines and his rabble at the Guido Fawkes blog. Thus far there has been a 100% correlation between these letters and the Fawkes rabble, and the thought thus enters that whoever is doing it is probably taking his actions with the full knowledge of one or all of them.

But on to the letter, which at least has managed to express the date in a grammatically correct fashion this time. This refers to a Zelo Street post taking issue with the Fawkes folks’ attempt to divert attention from the Tory Party’s election expense problems. I am informed that “the general thrust” of my post has caused some kind of invented complaint to be made. And then whoever is doing the writing goes wrong.

“The Labour Party has now been awarded the maximum £20,000 fine by the Electoral Commission in respect of compliance failures related to their bus expenses” it tells. Wrong. The fine covered a variety of missing invoices, including the notorious “Pledge Stone” which garnered so much coverage in the last days of the campaign. And it wasn’t a “maximum” fine. A competent complainant would have been able to get that right.

Moreover, as we’re talking “general thrust” here, the intention of the Fawkes attack on Labour was to suggest those invoices should have been allocated to local campaigns, which may have bust the candidates’ spending limits. The Electoral Commission decision does not address that point, and so it is pointless bringing it up. Once again, anyone who had engaged brain beforehand would not make such an elementary mistake.

Nor would they talk of “the excellent and reliable journalism of the Guido Fawkes [blog]”. Quite apart from The Great Guido’s tendency to selective reporting and transient relationship with the truth, as any fule kno, the Fawkes rabble wouldn’t be able to identify journalism if it jumped up and kicked them in their collective undercarriages.

So there will be no amendment, no correction, only the guarantee that Zelo Street will administer a suitable e-kicking to The Great Guido for every instance of stalking and harassment, as well as reserving my right to take whatever further action I deem fit in order to cause the inadequate creep generating these letters to desist.
In the meantime, as a means of communicating my response to the Fawkes rabble and their hangers-on, this post concludes with a short video showing the great Jon Stewart, with choral accompaniment, telling whoever is indulging in this particular illegal practice exactly what they can now go and do. You’re welcome.

[Anyone with information identifying the sender - email address at right]
Posted by Tim Fenton at 09:03

These letters have a use: they allow you another excuse (as if one was ever needed) to draw attention to how often the Guido rabble get it wrong.

Perhaps that's the purpose, and it's more subtle than what on the surface appears to be stalking & harassment with a touch of malicious communications added to the mix?

The letter is a spoof surely? Reads like something you'd find in Viz magazine.

How to you "award" someone a fine?

Have you ever thought that whoever they are, they are trying to (and possibly successfully) wind you up and get a reaction?

Smell it. Does it smell of Leprechauns and Chablis?


Staines is currently having a meltdown but won't make it public.

"We refer you to the reply given in the case of Arkell v. Pressdram"

(By all means email me - all information received in confidence)