The legendarily foul mouthed Paul Dacre and his obedient attack doggies at the Daily Mail have pulled some spectacularly silly front page stunts in the Vagina Monologue’s quarter-century in the editor’s chair, but today’s effort has truly taken the biscuit, as readers are told “MADNESS! As a Polish lorry driver is jailed for killing a family while on his mobile, we catch 17 foreign truckers using their phones at 50mph. The law MUST be toughened”. 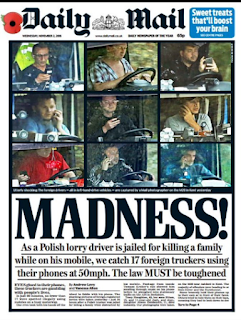 There was more. “Eyes glued to their phones, these truckers are gambling with people’s lives … In just 90 minutes, no fewer than 17 were spotted illegally using mobiles on a busy motorway … One even took both his hands off the wheel to fiddle with his phone. The shocking pictures of foreign-registered lorries were taken yesterday - just 24 hours after a Polish trucker was jailed for killing a family while distracted by his mobile”.

And more. “Our photographs were taken on the M20 near Ashford in Kent. The majority of offenders were heading to or from Dover and the Eurotunnel … Some brazenly held their phones up to their ears or in front of their faces. Others tried to hide them on their laps, meaning they had to look down to see the screen”. It might be difficult for the truckers to be heading to or from both Dover and the Eurotunnel, mind.

So all these dastardly foreigners were on the phone, were they? Well, maybe not: after the article tells “The lorries were doing 50 to 60mph – up to 90 yards in three seconds – meaning a short glance at their phone could be fatal”, it is conceded that “Our photographer estimated that at least 5 per cent of the lorry drivers he saw were breaking the law”. So one in 20 lorries. And probably ALL lorries (not just LHD ones).

Moreover, the assumption that anyone at the wheel of an LHD vehicle is one of those ghastly foreigners is not necessarily correct: see in one of those photos a driver has other countries’ flag pennants in his cab. They read HOLLAND … GERMANY … ROMANIA … FRANCE. Er, they’re all in English - d’you think that this could be an indication of the driver’s nationality? That he might actually be, oh I dunno, a Daily Mail reader?

But enough. The Mail manages to miss two non-trivial points: one is that the law has just been toughened, and for drivers of all nationalities. Using a hand-held mobile phone when driving now carries a six-point penalty, which means two of those and unless you can demonstrate extenuating circumstances, getting a driving ban.

And the second is that motorways, on a per route mile basis, are the UK’s safest roads, plus most abuse of the mobiles-at-the-wheel ban is done not on those roads, but on rather narrower thoroughfares in built-up areas, and not just by truckers, but also white van men and women, delivery drivers, sales reps, those on the school run, and many more. The problem for the Mail’s slanted agenda is that finding foreigners there is more difficult.

So they stake out the motorway leading to the Channel ports, filter out all the RHD vehicles, ignore everywhere else, and thus continue their demonisation of the “other”.

The Daily Mail is comically disgraceful and utterly wrong headed. No change there, then.
Posted by Tim Fenton at 13:56

Hi Bob - this is definitely todays paper. I saw it in the shops and everything. the date does look odd on that picture though...

makes no difference how much you toughen the law, if you cut public spending so much that there are no traffic police to enforce it what's the point. Earlier this week in the err.. Daily Mail - how a british pensioner driving the wrong way on the M1 could not be stopped because Leicestershire Police had NO motorway patrols anywhere in the county!
http://www.dailymail.co.uk/news/article-3894546/amp/Pensioner-dementia-87-killed-father-27-head-crash-drove-30-miles-motorway-wrong-direction-just-two-months-police-failed-spot-licence-revoked.html

and a few days ago I saw a van driver in Crewe using his phone as he approached a hump back bridge with a roundabout on the blind side, the van being clearly marked as a Cheshire Police vehicle (scenes of crime).