The Dow Jones index is predicted to open at least 800 points down today, in celebration of an unstable bigot, an unashamed sexual predator, and a confirmed racist being elected the 45th President of the United Stats of America. Yes, Donald Trump, the Combover Crybaby, has beaten Hillary Clinton, who was always labouring with the thought that she was just a little too Washington Establishment to prevail. 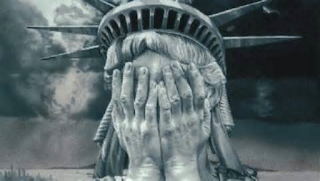 Despite being shunned by many in his own party, having control of his own Twitter feed taken away from him in the closing stages of the campaign, and garnering the endorsement of very few newspapers - but the enthusiastic backing of the KKK - Trump persuaded many in Middle America that he would indeed make the country great again. He won’t. But it was the belief that a businessman could do what ordinary politicians could not that has carried him over the line. Now comes reality.

And that reality is that if Trump attempts to do a fraction of what he has been threatening or promising in the past few months - curtail First Amendment rights, lock up his opponents, deport eleven million undocumented Americans, stop Muslims entering the USA, build a wall along the Mexican border - then a Congress dominated by his own party will begin impeachment proceedings and he will be removed from office.

Moreover, if he is allowed to enact the tax cuts that he has been promising, the USA will have to run the biggest deficit known in the Western world, or the US Dollar will collapse and hand major reserve currency status to the European Central Bank. For the Euro, an often derided and still young currency, that would be quite an achievement.

It might not get that far: The Donald faces questions, and maybe worse, over his failed University venture. The rest of the world is not exactly showing enthusiasm at his election: his first endorsements extend to Nigel “Thirsty” Farage, Marine le Pen, and Vladimir Vladimirovich Putin. The leaders of Poland, and especially the Baltic States, are becoming nervous at the prospect of a Putin fan in the White House.

There is one line of business, though, that is guaranteed to prosper, however comprehensively Trump and his fellow Republicans foul up their country, and that is the genre that is comedy. Trump is appallingly thin-skinned, unable to take even a suggestion that he has small hands without descending into a vengeful, ranting mess.

When Jon Stewart found himself on the receiving end of a routinely anti-Semitic attack from The Donald, who clumsily pointed out that Stewart’s real surname was Leibowitz, the  former Daily Show host countered by claiming that Trump’s real name was Fuckface von Clownstick. The Donald ranted “What’s funny about the name F**kface von Clownstick?” and later - at 0130 in the morning - Tweeted “Little Jon Stewart is a pussy”.

And that person will soon be in charge of the CIA, the FBI, and the nuclear codes. If we didn’t laugh about that, we’d all end up crying. Welcome President von Clownstick.
Posted by Tim Fenton at 10:19

First Brexit and now Prez Trump! A generation of kids will have noticed that the way to succeed big is to lie repeatedly big. A lesson taught by the press media and politicians.

The future is bright with obfuscation and the resulting uncertainty. About anything.

Guess who "advised" Clinton on the campaign?

That's four in a row.

That's the same McTernan who spits hate every time he is rolled out by mainstream media to "advise" on how to "deal" with Jeremy Corbyn.

Corbyn and McDonnell must be laughing their socks down.

It will be interesting to see if the child rape allegations against Trump due to be aired in court next month come to anything. He will be the first president-elect to have that hanging over him.