Faithful Murdoch retainer Trevor Kavanagh has given Sun readers the questionable benefit of his wisdom today as he lays into yet another Labour leader, this time from the past. “Former PM Tony Blair wants to poke his sticky fingers back into British politics, but hasn’t he done enough damage? The man who single-handedly fuelled the anti-EU rage which triggered Britain’s stunning OUT vote in June now wants to have his say on Brexit”. 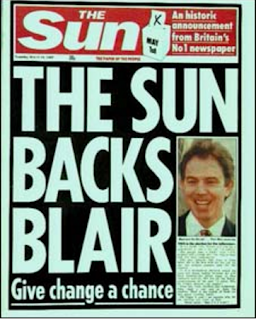 That’s most interesting, the idea that the vote to leave the EU in this year’s referendum was due to some factor other than Young Dave and his jolly good chaps imposing six years of needless austerity on the electorate while the likes of the Murdoch press - that would be the one for whom Kavanagh spews his tenth rate rantings - tell their readers that the stagnating wages and worsening living conditions are all down to Johnny Foreigner.

Indeed, when Tone secured his third victory as Labour leader in 2005, EU membership was not in question, and Kavanagh knows full well that not even the Sun would have secured a No vote if there had been a referendum then. But on he ploughs. “It was Blair as Prime Minister, remember, who flung open the doors to mass immigration - the key factor in people’s minds, especially betrayed Labour voters, when they chose Brexit. It was Blair as PM who gave away a sizable chunk of our EU rebate in return for sweet FA”. 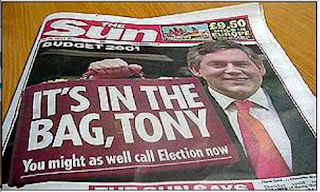 Immigration is only a key factor in the minds of the inmates of the Baby Shard bunker. Moreover, when Blair was winning, they not only kept quiet about a referendum - they backed Blair to the hilt. But let’s see his reasoning, however tedious.

“When PM, he gave away our EU rebate worth billions in return for a fantasy promise on farm subsidies which France still runs like a private gravy train. He plunged Britain into the Iraq war at huge cost in soldiers’ blood and taxpayers’ money without negotiating a single favour from America in return”. We still have a rebate, thanks. And the Iraq war was something cheered on by … well, the Sun. Trevor Kavanagh’s paper. 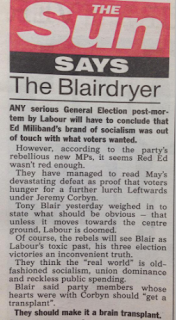 Let me put this directly: the Sun backed Blair in 1997. It backed him in 2001 - no complaints about immigration then - shouting “IT’S IN THE BAG, TONY … You might as well call election now”. It backed Blair in 2005 - AFTER the Iraq war, and after it became clear that the mythical WMD did not exist. AFTER even more immigration. It was no problem for Kavanagh and his pals then. They were all for him.

Now, because Murdoch is desperately trying to stop his readership seeing just how bad a Prime Minister Theresa May is, and that she and her jolly Brexiteers have no idea how they’re going to accomplish Britain’s departure from the EU, Kavanagh - ever the obedient lapdog - does as he is ordered and lays into Blair. Just to let him know that Don Rupioni still disapproves of him not really shagging his former wife, you understand.

Hell’s teeth, the Murdoch goons even backed Blair as recently as last year, with its “The Blairdryer” editorial. The Sun is hypocrisy on stilts. No change there, then.
Posted by Tim Fenton at 16:46

Weapons of mass destruction in 45 minutes.
How many years did it take intelligence services to reach Murdoch....
Still waiting.............

No chance of getting to the vault in 45 minutes but they smashed The Guardians hardrives.

Of course the Sun didn't back Blair or the Iraq war. Just like trump didn't. You may have evidence that they did but that's just because you're a liberal elite out-of-touch inhabitant of the metropolitan Crewe bubble.

You just don't get this post-fact politics, do you Tim?

There's no hypocrisy involved. Kavanagh and Blair are BOTH lying gobshites.

Blair is the worst political traitor in Europe since Vidkum Quisling. Kavanagh is the worst traitor to press democracy since Kelvin MacFilth. So there's a sort of symmetry in play here.

That one of them opportunely turns on the other is simply par for the course. London is riddled with their type in politics, business and media.

If you think you've seen the bottom of the barrel, wait until the Murdoch goons (which includes Neil and others in the BBC) renew their propaganda attacks on Jeremy Corbyn and John McDonnell.

Kavanagh and Blair are a clear case of rat eating rat.

But do you know who "intelligence" work for? Now, then or in future as Saint Theresa tries to get in with Trump who has got on with Putin. And Murdoch who gets on with anyone, including Blair, who can come to an accomodation.

Perhaps just part of a cock up theory - "This is intelligence speaking" as in the Ronnie Barker bit part in The Navy Lark?

Blair, of course, is firmly on the side of a 2nd ratifying referendum - as and when. He had a big piece in the New European a week or so back.

And that's what the apoplectic Leavers demanding instant cut-off can not tolerate.

Lot of momentum for a 2nd referendum, (if necessary), but no one yet demanding it should involve compulsory voting. Which it should.

If we are going to go under, then let a real majority decision be the decider.