Whatever one’s opinion of the sport, darts has always had more than its fair share of characters, and none has been more significant and enduring than the “Crafty Cockney” Eric Bristow, part of whose persona is that he doesn’t much care what people think - and has been dismissive of many journalists over the years. In any case, the arrows can do the talking for him, and a whole slew of titles stands testament to that. 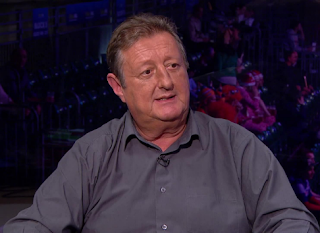 Sadly for Bristow, his tendency to shoot from the hip has not served him well when combined with an ill-advised excursion on Twitter in the wake of the revelations over the sexual abuse of young men and boys at a number of football clubs in the past. Much of the abusive behaviour is alleged to have been down to coaches like Barry Bennell, who was suddenly sacked by Crewe Alex in 1992 for reasons that have never been made clear.

The Tweet that began Bristow’s downhill slide read “Might be a looney but if some football coach was touching me when i was a kid as i got older i would have went back and sorted that poof out”. Homosexuality and paedophilia confused yet again. And his later claim “bet the rugby boys are ok” didn’t endear him to anyone in that sport who had suffered abuse.

Then came the backlash: first, as the Guardian has reported, “The former darts world champion Eric Bristow has been sacked by Sky Sports after he tweeted comments about the football sexual abuse story on Monday … Bristow, 59, had been a regular contributor to the channel’s darts coverage since the early 90s but Sky announced on Tuesday morning that he would no longer be used by it. ‘He was a contributor to our darts coverage in the past but we will not be using him in the future,’ a spokesperson commented”.

Soon afterwards, the Manchester Evening News told its readers “Charity reports Eric Bristow to police over tweets on football sex abuse scandal … The five-time world darts champion stunned fans last night with a stream of messages in which he labelled footballers who have recently revealed they were abused as ‘wimps’ … Survivors Manchester, a group which supports boys and men affected by sexual abuse, rape and sexual exploitation said they had forwarded them to his local police force”.

Then Sky News reported that “Newcastle United have said they will never work with darts player Eric Bristow again after he posted inappropriate tweets about the football abuse scandal … The former darts world champion has been heavily criticised after calling footballers ‘wimps’ on social media, adding: ‘Glad I am a dart player proper men’ … Newcastle United are one of the clubs involved in investigations after the Guardian newspaper reported that a former player had contacted police to make allegations against George Ormond … Ormond was a coach in the North East who was jailed for six years in 2002 for carrying out numerous assaults across a 24-year period”.

Nothing like engaging brain before firing up the Twitter feed, it seems. But thus far, Bristow has not done the one thing that could provide him with some respite from the gathering storm of bad publicity and the serial shunning of those who had previously been happy to provide him with work opportunities - hold his hands up and say sorry.

I’m sure Bristow is a proud man. But now he needs to swallow that pride and admit he got this one very wrong indeed. It would be better to remember him for all the right reasons.
Posted by Tim Fenton at 16:34

I wouldn't hold your breath waiting for that apology.

He deserves every single bit of abuse he's getting, and a lot more besides.

I know that the whole story amounts to little more than 'not-very-bright-darts-player-tweets-while-pissed', but this seems a strangely sympathetic account, Tim.

By an amazing co-incidence this latest sensation has finally buried the BBC's involvement in the Savile scandal, and the Henriques Report that excoriated police behaviour over sensationalized claims from fantasists.
Bristow's tweets and words were most unwise but so are Victoria Derbeyshire's equally appalling exhortations for victims, not claimants, to contact her.
Bristow is a mere sideshow in this. The media seems intent on ensuring no-one could get a fair trial.

"But now he needs to swallow that pride and admit he got this one very wrong indeed. It would be better to remember him for all the right reasons."

Not convinced that an apology made just to get him off the hook is good enough if what he tweeted represented his own views. If it has shown what his views truly are than other can decide whether they need to bother listening to him in future.

The celeb culture club should tread carefully. Eric Bristow is no Gary Lineker although I suspect the Daily Mail and The Sun may disagree, at least openly.

Darts is a pub junk "sport," nothing more. Bristow is its proper product.

He's "guilty" of stupid, unthinking, casual homophobia. But then so are a very large slice of the population.

I don't think Bristow meant any harm. Like many others of that ilk he just has no idea that he's part of a slow daily drip of neurosis that can have a terrible affect on sensitive or vulnerable victims. The same thing can apply to casual racism.

Bristow's affect is worse because he's a public figure, albeit of the ale house type.