Gina Miller Abuse Is Out Of Order

The growing tide of unpleasantness directed at Gina Miller, who led the challenge to the idea that Theresa May could trigger Article 50 of the Lisbon treaty without further reference to Parliament, has now reached critical mass after the Murdoch Sun was caught bang to rights recycling an old-world racist trick that some may have thought had disappeared from newspapers with monochrome photography: skin darkening. 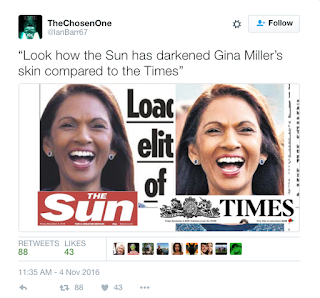 There is was: the same photo of Ms Miller used by both Times and Sun, but her skin is darker in the Sun. The trick used to be popular at the Daily Mail. Who has recently come to the Sun from the Mail? That would be non-bullying and not at all rodent-like editor Tony Gallagher. But Gallagher, like so many of the Murdoch goons, is of less than perfect courage, so I don’t expect him to own up to this slice of rank bigotry any time soon. 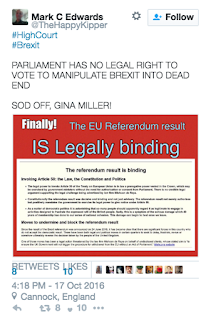 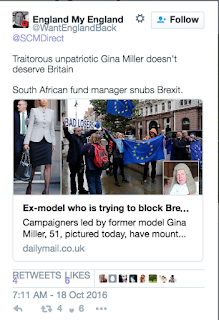 Meanwhile, the hate campaign had been on the go well before yesterday’s judgment, as witness “PARLIAMENT HAS NO LEGAL RIGHT TO VOTE TO MANIPULATE BREXIT INTO DEAD END … SOD OFF, GINA MILLER!” (the referendum result is not binding, thanks) and “Traitorous unpatriotic Gina Miller doesn't deserve Britain … South African fund manager snubs Brexit” from October. And she isn’t South African, either. 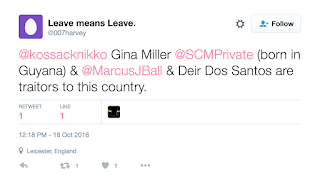 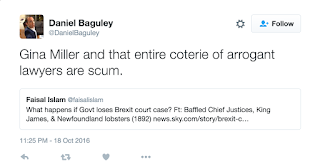 There was more. “Gina Miller @SCMPrivate (born in Guyana) & @MarcusJBall & Deir Dos Santos are traitors to this country”. They are British citizens. Have another go. “Gina Miller and that entire coterie of arrogant lawyers are scum”. I see the brains trust has been at work. Small wonder she’s been getting death threats too. 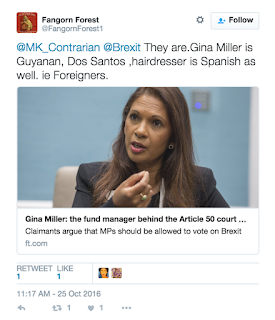 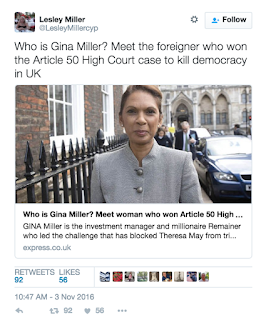 The “foreigners” claim kept on coming: “Gina Miller is Guyanan, Dos Santos, hairdresser is Spanish as well. ie Foreigners”. Deir dos Santos was originally from Brazil, it seems. But he is a British Citizen. So on to yesterday, and guess what? “Who is Gina Miller? Meet the foreigner who won the Article 50 High Court case to kill democracy in UK”. There is no effect on democracy, and she is still a British citizen. And there’s more. 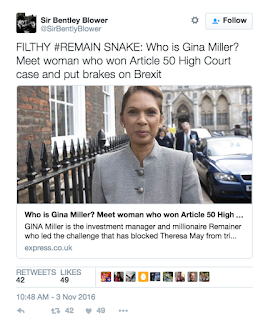 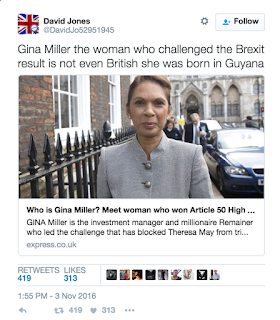 One particularly rank slice of pond life declared that Ms Miller was a “FILTHY #REMAIN SNAKE”. That’s someone who calls himself “Ex-Military, Business, Science and Technology”. Hopefully not an inspiring logician, though. And back to the “foreign” meme: “Gina Miller the woman who challenged the Brexit result is not even British she was born in Guyana”. Had she not been British, she could not have brought her challenge. 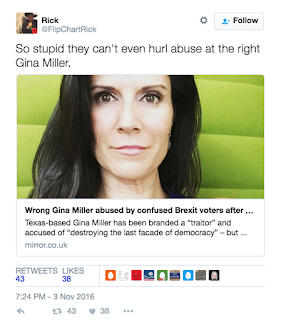 But still they came: “The division between Remain & Leave voters was starting to heal; Gina Miller has opened up a hateful chasm by shitting on democracy”. The only hate is that being stirred up by the Outers who have difficulty understanding English law - or the meaning of democracy. Or, indeed, who they were abusing, as the great Flip Chart Rick told: “So stupid they can't even hurl abuse at the right Gina Miller”.

Many were abusing a Sports presenter in Texas. That is the level of what the press, with the Sun at its most repellant, is stirring up. It’s bang out of order. And it’s time it stopped.

[UPDATE 1815 hours: it is now being claimed that the Times lightened the photo of Gina Miller, rather than the Sun darkening it, although confirmation from either paper has not yet been seen. More information on this when it is available]
Posted by Tim Fenton at 15:50

Sun-reading, hate-filled planks abusing sports presenters? Hmm. There seems to be a lot of that about at the moment, as Mr Lineker will doubtless testify.

Having looked at a large number of today's papers, there seems to be considerable sample variations between print runs of the same paper. The darkest face was actually on a Guardian paper, although on that one the whole page looked "over-inked" as if the printing press had just had the ink flow adjusted.

Surely the whole point about all this is that at a General Election we appoint our representatives and trust them to make decisions on our behalf for the duration of that parliament. But this wasn't an election, it was a single issue referendum (promised in an election manifesto) and the duty of parliament is to enact what the majority voted for. Otherwise, what is the point of holding a referendum?

It can't be long now before somebody challenges the validity of the result of the 1975 EEC referendum.

The Brexiteers scream for an apology from the nurse who got over excited on QT last night. Why are they not screaming for apologies for the death threats etc. that their partisan reporting has engendered??

The result of the Referendum is not legally binding, either on Parliament or anyone else. That is was merely consultative was written into the Bill which set it up.

It is true that it might be politically difficult to disregard it (even with the small margin involved), but the fundamental principle of what passes for the Consitution of the UK is that Parliament is sovereign, not the general population. This is basically what the High Court upheld in its judgment. It would therefore be perfectly constitutional for Parliament to stop the 'Brexit' process altogether should it be minded to do so. Bear in mind that there are said to be substantial pro-EU majorities amongst both MPs and peers.

Furthermore our MPs are, as you correctly say, our representatives, not our delegates. They are therefore at liberty to vote in any way they see fit, taking wider considerations into account. And that members of the 'Other Place' can do much as they please, and that any 'Brexit' measures would have to get past them as well.

The Sun picture looks like one of their Geordie Shore zeleb spray-tans.

if the Times lightened the photo then the BBC must have lightened her face in live video - technically possible I suppose but somehow I doubt it.

The point of a non-binding referendum is to give MPs a sense of what people think. Legally no obligation or timetable followed from this result. To be honest 52:48 is equivocal at best and hardly a basis for major change in our relationship with rest of world and potential harm to our economy.