The Murdoch mafiosi at the Super Soaraway Currant Bun have extended their campaign to demonise anyone coming to the UK who is black, brown or a follower of The Prophet to whipping up resentment among migrant’s neighbours, not that they’re trying to foment unrest and put people’s lives in danger, you understand. The hacks’ latest attempt at incitement has taken place in a cul-de-sac in Milton Keynes

Target of the Baby Shard bunker’s inmates is a man called Arnold Mballe Sube, who by the most exceptional of coincidences is black. He is training to become a psychiatric nurse, and the NHS is paying for his studies. He also works ten hours a week as a care support worker. But he and his family have been housed in the detached house by Luton Council, and the rent is being paid via Housing Benefit.

Cue outrage from the Murdoch goons, first via an editorial ranting “It is simply bonkers to pay hundreds of thousands of pounds in benefits to secure the services of foreign NHS staff like Arnold Mballe Sube … His family has cost the NHS almost £100k in benefits and our broken benefits system needs fixing now”, and today using an article which shows the paper’s staff have been whipping up resentment among the Subes’ neighbours. 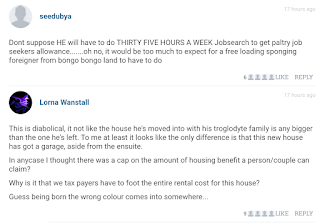 There is also the matter of the helpful map showing that Sube originally came from Cameroon, but left the country at the age of 18 to travel to France, where he met his wife. He had lived in France for 11 years and so was able to move to Britain under Free Movement rules - this also plays to the Sun’s anti-EU stance. His family had been renting privately before losing their house last year. 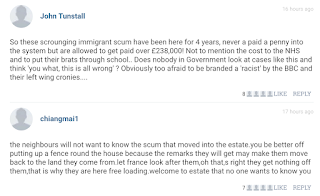 But the Sun does not call him an EU national: for the Murdoch doggies, he is “foreign”. Readers are also instructed what to think by such nuggets as “We found one bedroom of their end-of-terrace four-bed in Bletchley, Bucks was being used as a study and saw an X Box, laptops, android phones and a Sky HD box”. How, if that was an upstairs room, did the Sun’s hacks “see” that? Just how intrusive has the snooping been? 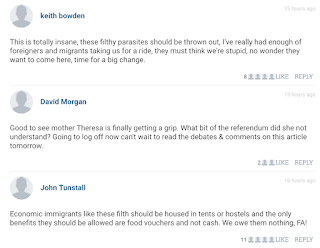 That assumes, of course, that anything was seen. There is also the matter of the paper’s hacks stirring up the Sube’s neighbours, eliciting comments like “We work hard and pay our bills and they get this for nothing”. How was the impression formed that the Sube family got it “for nothing”? Another neighbour said “we don’t cheat the system”. Who told them that the Sube family was cheating the system? 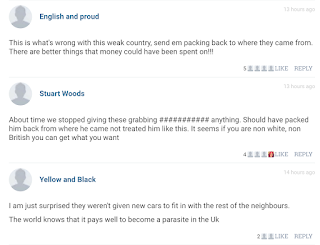 Who suggested to all those neighbours that Arnold Sube was not working? Who suggested to the neighbours that the Sube family was complaining about the house they were now living in (they weren’t)? Why has the property been so clearly identified, along with Arnold Sube and his wife? We know what the intention of this approach is - you only have to look at the comments, some of which have been shown here.

The vicious racism and intolerance expressed by Sun readers shows all too clearly the result of this incitement. This is journalism that has leapt in one bound from gutter to sewer. It is clearly intended to throw a defenceless family to the mob, and then wash its hands of the consequences. It is truly beyond the pale. Don’t buy the Sun.
Posted by Tim Fenton at 12:49

This family have been the victim of no less than six articles in The Daily Mail since early September, each more intrusive and shrieking than the last. Amanda Platell was on hand to call them 'shameless'. All the pictures show is a well turned out man and his wife, and his beautiful children leaving in a tidy house. The articles paint him as desperate, greedy, duplicious 'immigrant'. Despicable stuff.

The UK is becoming a pariah state. The Conservative Party Conference was an eye-opener for Europeans. I think most EU States would be relieved if the UK would get out now, and shut up. The chances of fhem getting access to the single market are zero. The EU is based on the rule of law and the fundamental rights set out in the EU's Charter. The EU States can remember the 1930s.