Today is Easter Sunday, the day on which Christians celebrate the resurrection of Jesus Christ from the dead. And at first, Mail On Sunday Comment suggests the paper would bear His teaching in mind, telling readers “Easter Sunday is an appropriate moment to note Britain’s long and proud tradition of Christian compassion. We are an instinctively generous and outward-looking people, filling the buckets of charity collectors when disaster strikes in distant lands. We give when it is needed”. 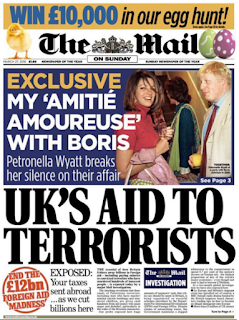 But this was a mere taster for a typically thundering attack on that same Christian ideal, signalled by a front page ranting “UK’S AID TO TERRORISTS … EXPOSED: Your taxes sent abroad … as we cut billions here”. The attack is backed up by a petition, and the same editorial reminds readers “Sign here to axe absurd aid target”.

Much of our well-intentioned foreign aid “ends up in the pockets of terrorists, plutocrats and fat-cat private contractors … The UK’s pledge to hand a fixed 0.7 per cent of national income to the aid budget has created a perverse, upside-down world in which bloated projects are created purely in order to find something to do with the cash … David Cameron has tied his own hands … because of cynical political positioning”.

So it goes on: the Government stands accused of “wrapping themselves in the clothes of the powerful foreign aid lobby … spraying handouts on foreign nations where it is frequently siphoned off by the wealthiest in their societies”. The supporting article tells that “After yet more budget cuts, another £12bn of your taxes are being splurged on foreign hand-outs for militants, killers, Palestinian palaces and jobs that don't exist”.

And this is where the sleight of hand comes in. The MoS finds that Britain sends aid to groups like the Palestinian Authority (PA). The PA pays money to the families of many who have been imprisoned and can no longer look after them. Some of those imprisoned have been convicted of terrorist offences. The MoS concludes that Britain is giving money to terrorists, and so we get that front page headline.

It gets worse: Britain pays aid money to the PA. The PA builds a new Presidential Palace. Therefore, says the MoS, Britain pays for the news Presidential Palace. The thought that the aid money might pay for something else, and that the Palace may not be that something else, is not allowed to enter. At no point does the article even hint that the MoS has managed to lay an audit trail and therefore prove its allegations.

The MoS’ eight point “Foreign aid manifesto” includes “HIT THE FAT CATS … Crack down on the contractors getting rich and inflating profits”, but no example of this is given. Likewise, “DITCH THE DESPOTS … Scrap those aid schemes that are benefiting and propping up repressive one-party states, such as Rwanda and Ethiopia”. There’s nothing about Rwanda or Ethiopia, either.

We know what the MoS, and its daily stablemate, think of foreign aid. All this “investigation” has done is to back up a conclusion that had already been reached, using contributions from partisan players and politicians. On such a day of Christian celebration, the MoS’ mean-spirited rant shows that it has forgotten Jesus. No change there, then.
Posted by Tim Fenton at 15:58

But siphoning public money into the hands of private corporate fat cats is what the Tories *do*. Why is the Mail surprised at this? Where are the thundering front page headlines objecting to forced Academisation of schools, underhand Land Registry sell-offs and the underselling of the national share in RBS?

Would they be the buildings destroyed by Israeli bombardment and massacre of thousands of innocents in Gaza - the one ignored by the Daily Heil?

Would that be the "lobby" led by Blair and other war criminals in New Labour, the tories and the LibDems who stopped the inquiry into British corruption in the Al Yamamah arms deal - the one that enabled fascist Saudis to invade Bahrain, and massacre Houthis in Yemen, also ignored by the Heil?

Or have the sociopathic Rothermere, Dacre and their SS employees suffered yet another catastrophic "loss of memory"?

They forgot one group: newspapers that syphon off profits from unsuspecting tabloid readers, avoid paying taxes so the waged taxpayer supports them and send those profits off-shore to Media Potentates living in Palaces in the South Of France.