Nothing, but nothing, is permitted to come between Rupe’s downmarket troops at the Super Soaraway Currant Bun and the means by which they get all those allegedly popular stories into the paper. Slebs, Royals, Scroungers, Foreigners, Refugees, Crims, Spivs, and of course Scary Muslims (tm) - none must get in the way of churning out that copy and generating More And Bigger Paycheques For Themselves Personally Now. 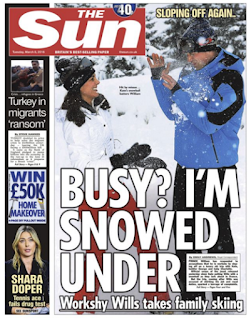 So when the Duke and Duchess of Cambridge and their children went off for a few days’ skiing recently, and did so without the hacks and snappers finding out, Sun staffers were incandescent with rage: “Busy? I'm snowed under: Workshy Wills takes his family skiing in a Windsor wonderland … Prince William and Kate take George and Charlotte on a hush-hush family holiday” screamed the headline.

What was the problem? “PRINCE William has responded to accusations that he is workshy by sloping off on a luxury ski trip with Kate, toddler George and baby Charlotte … Official snaps of the jaunt released yesterday show Kate pelting Wills with a snowball as they lark about in France … But the trip, coming after Wills was accused of shirking his job and royal duties, sparked a barrage of complaints”. Er, no it didn’t.

Despite what was most likely a serious trawl of the Web, all the paper could find was “One social media user wrote”, which is lame even by the pitifully low standards of the Sun. The real reason for the mardy strop is revealed further into the report: “News of the trip only emerged yesterday when the official photos were released by Kensington Palace … In the past photographers were invited to capture the royals on the slopes”.

Aw diddums! But the Murdoch doggies then doubled down, with a Sun Says editorial whining “Our underemployed future King now sneaks off on secret holidays, revealing a few photos only after his return … We are not even entrusted to know exactly where the family went or what it cost us … The quid-pro-quo of the Royals’ fabulous lifestyle is hard work and accountability to the taxpayers who fund it”.

“Fabulous lifestyle?” Being chased around by the cheaper end of the Fourth Estate as a way of buttressing their rapidly dwindling sales figures? “Hard work and accountability?” The Murdoch press, in their plush new ivory tower at London Bridge, calling “hard work” on anyone else? As Billy Connolly once said, “There’s going to be some swearing … F*** OFF!” Seriously, all this is is carping for a few lost copies.

The press has already sold readers a complete crock of crap about Prince William, claiming he only works “80 hours a month” by misinterpreting CAA rules about pilots’ flying hours. When the Sun whines “he should think of our readers, and not alienate them by controlling every scrap of information and every picture”, they mean themselves. The readers have plenty of slebs and sports stars to chat about. They aren’t fussed.

Prince William outwitted the dopes at the Sun. Good for him. Get over it, hacks.
Posted by Tim Fenton at 10:08

As a republican I can hardly wait for the British "royal" family to be dumped in the dustbin of history.

Them and the Scum together, actually. They deserve each other.

They really are very angry, aren't they? Angry that they've been kept in the dark? Its almost like they used to know what the royals were up to, but now don't, unless its announced.

They are losing that grip.

Wonderful to see the royals getting the well deserved privacy.

Such a shame it took so long and so much trashing of their lives by people who wouldn't know patriotism if it stabbed them in the sweet meats.

Basically, what these people are is an organized crime family. .... !