Even before bothering to analyse last week’s attacks in Brussels, the Mail was trying to frighten its readers at the prospect of some kind of unspecified nuclear catastrophe, by deploying the usual methods of falsehood and misinformation. Sadly, though, the lame standard of research employed made the resulting articles the butt of so much ridicule that the purpose of the exercise was all but negated. 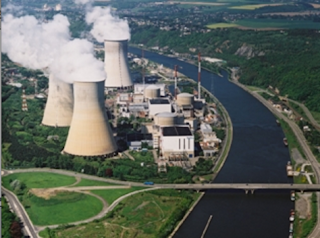 Tihange nuclear power station - not in the Brussels suburbs

First came the blatant exaggeration: “Belgium evacuates two nuclear power stations amid fears ISIS will attempt to follow the Brussels attack with a dirty bomb … Tihange nuclear plant, around 50 miles southeast of Brussels, evacuated … Doel nuclear facility, near Antwerp, has also been evacuated by authorities … French company ENGIE, which runs facilities, confirmed staff had left sites”. There was only one problem.

And that was that the sites had not been evacuated, as the Guardian stressed: “After Tuesday’s attacks, the nation was put on high alert. All non-essential staff were sent home from nuclear plants at Tihange and Doel and military presence was increased at the sites”. Could the Mail do even worse? They certainly could. A helpful map was included with the article, but contained some glaring inaccuracies.

The Brussels suburb of Schaerbeek was missing a letter. An inset map clearly highlighted the location of Brussels within Belgium, but someone had overridden the obvious and marked out an area on the country’s southern border, claiming Brussels was there instead. Then to cap it all, the Tihange nuclear power station was moved around 75 kilometres and plonked in the eastern outskirts of Brussels. 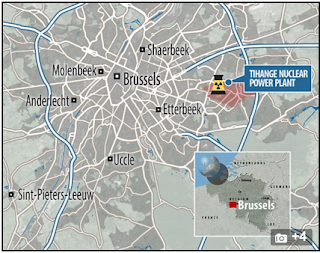 Still, there was a nuclear scientist who had been covertly filmed by a terror suspect. The Guardian again: “The 10-hour video, shot by a hidden camera in a bush, showed a senior nuclear official coming and going out of his home in the Flanders region”. Did he have access to nuclear materials? The Mail wasn’t going there. It was far easier to tell readers that ISIS, or whatever they’re called this week, wanted to make a nuclear bomb.

Exactly how they intended to make that, and then make it viable, was not told (clue: without specialist knowledge and facilities, the chance of that happening are not unadjacent to zero). Still, out came the claim: “The Brussels terrorists may have been plotting to make a radioactive bomb after it emerged 11 nuclear power plant workers have had their site access revoked amid fears of 'insider help’”.

Why was the access revoked? The Mail doesn’t know. It’s speculation. And just to put the lid on comes the ridiculous frightener “One Belgian plant is only 90 miles from Kent”. And, so what? The largest nuclear power station in Western Europe is far closer - it’s at Gravelines, on the French coast, between Dunkirk and Calais. And that one isn’t going to be used by terrorists to make a dirty bomb, either.

The Mail - so useless it can’t get its terrorism scare stories right. No change there, then.
Posted by Tim Fenton at 17:27

Start a new scare. Bradwell nuclear power station in Essex is about 90 miles from Ostend. Ooooh!

LBC swallowed the same story and reported that the Belgian cell planned to make "a form of nuclear bomb".

VideoTAPING? Are they sure it wasn't cine-film??? If ISIS intelligence agents are wandering around Europe with huge lumps of obsolete equipment like that they should be easy to spot! Or maybe the Daily Mail is living decades in the past........


And the map is even more wrong, I'd say the red box on the inset is supposed to show the location of the Brussels map within Belgium - but it's actually on Mons.

Would it be appropriate to say there has been an increase in young non European looking males seen in driving jobs lately?
Driving large vehicles.

Probably nothing but if it isn't?