The obedient hackery of the legendarily foul mouthed Paul Dacre is in triumphal mood today, as the front page declares “After Mail campaign, bid to neuter Freedom of Information Act is axed … VICTORY FOR YOUR RIGHT TO KNOW”, and the supporting article proudly tells “The public's right to know about corruption, incompetence and grotesque waste in the state sector wins a major boost today”. Do go on. 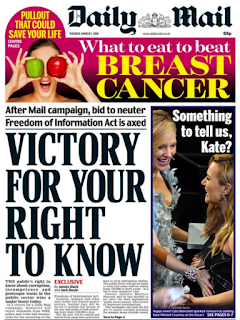 “In a victory for a Daily Mail campaign, ministers will reject demands from NHS, police and town hall bureaucrats for the neutering of the Freedom of Information Act … Councils, quangos and other state bodies had wanted greater secrecy. Instead they will be forced to publish full details of the pay and perks of staff pocketing more than £150,000 a year”. Fortunately, FoI does not apply to the Mail.

There is even a thundering Daily Mail Comment, as the authentic voice of the Vagina Monologue triumphantly announces “Politicians and quangocrats despise the Freedom of Information Act, which since 2000 has exposed a series of scandals – from MPs’ expenses to lavish pay and lifestyles in the public sector”. Not half as lavish as Mail Editor Paul Dacre, whose remuneration package is well into seven figures.

And that’s before the six-figure packages - including private health care, the Mail’s top brass wouldn’t be seen doing anything so bleedin’ common as using the NHS - doled out to the paper’s dubiously talented array of pundits, most of whom have sacrificed their souls and their personal beliefs in order to join the generously-remunerated groupthink gravy train bringing More And Bigger Paycheques For Themselves Personally Now.

But then a problem enters: the Government’s FoI climbdown does not appear to have been significantly influenced by the Mail, if at all. Last October, Press Gazette reported “Press Gazette is backing a campaign to stop the Government placing new controls on the Freedom of Information Act … The Hands Off FoI campaign was launched at the Society of Editors conference in London today by the Society working in conjunction with Press Gazette and Holdthefrontpage”. They don’t get a mention in the Mail.

And another group that definitely won’t get any credit from the inmates of the Northcliffe House bunker is the NUJ, which hosted meetings warning about threats to the Act. Nor will the Labour Party, which, like the people at Press Gazette, has been quietly celebrating victory, with deputy leader Tom Watson telling “This is a remarkable government climbdown in the face of sustained opposition from Labour, the SNP, the Liberal Democrats, and the media”. The Lib Dems and SNP aren’t credited by the Mail, either.

Unlike the Mail, Labour is not letting up in its campaign, as Watson signed off with “In the meantime, the Tories should now set out the full cost of setting up and running the Government’s independent FOI commission, which has decided after many weeks of expensive deliberations to maintain the status quo. If the cost is not disclosed we will submit an FOI request that his department will no doubt process speedily”.

That’s something else you won’t see at the Mail - a sense of humour.
Posted by Tim Fenton at 14:16

Heil newspapers will now of course publish a list of all staff earnings of every type, plus their expenses, plus any bribes paid to "scandal" pedlars, plus a republication of their support for Nazi Germany.

How nice of the Mail to want its doting readership to believe that the maiming of FOI was being orchestrated from beyond government, as opposed to from within government itself.

Ha!
Could we perhaps get the info from rival journalists?

Actually, the average man and woman in the street can give these details if they are aquaintances or ex aquaintances.