The inmates of the Westminster bubble have an occasionally tenuous relationship with reality, especially on the fringes of the Tory Party: there was Grant “Spiv” Shapps thinking he could be a credible leadership candidate, Michael “Oiky” Gove believing he could get away with leaking Privy Council confidences to the Sun, and London’s increasingly occasional Mayor Alexander Boris de Pfeffel Johnson claiming to be anti-EU. 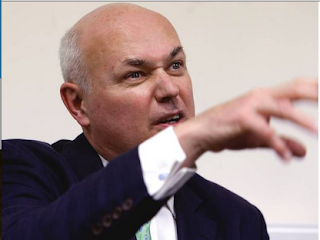 Do not underestimate the dishonesty of a coughing man

Into this looking glass world yesterday evening entered the deeply dishonest figure of Iain Duncan Cough, who, after years of picking on the least well off in society and hammering the most vulnerable - those with disabilities - has undergone a Damascene conversion to something called high principles, to the amazement of all those who had concluded that he wouldn’t recognise such things if they jumped up and kicked him in the undercarriage.

Duncan Cough was resigning, he claimed, because Young Dave and next door neighbour Gideon George Oliver Osborne, heir to the seventeenth Baronet, were being jolly rotten to the disabled - rather like he had been since he got his feet under the table at the DWP back in 2010. Very few believed him. Most smelt a rat within seconds of Duncan Cough’s announcement, probably because it contained an unfeasibly large amount of said rat.

There was, let us not drive this one round the houses for too long, zero sincerity in Duncan Cough’s alleged concern for the disabled. He has been hammering them for almost six years. His resignation on those grounds is a sham, a fraud, an act of blatant dishonesty from a deeply dishonest and miserably shallow politician. There are good reasons why he has gone, but none of them involve giving a crap about anyone else. 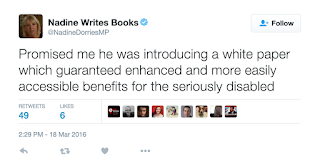 The DWP has just lost the latest round in its battle to keep information on Duncan Cough’s flagship Universal Credit scheme secret - a battle on which a significant amount of taxpayer funds has already been expended. He can now duck any of the fallout. More importantly, he can now join Bozza and campaign Britain to leave the EU - his resignation is mostly about opportunism; in his dreams, Johnson will give him a job after Dave goes. 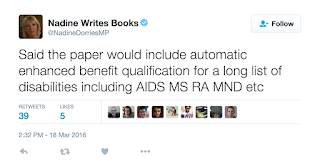 That is the kind of fantasy world some Westminster politicians inhabit. The extent of Duncan Cough’s dishonesty was later laid bare by (yes, it’s her again) Nadine Dorries. In an angry Twitter outburst, she claimed “Stunned at IDS resignation letter. I was about to vote against ESA cuts when he sought me out - he personally and angrily begged me not to … Promised me he was introducing a white paper which guaranteed enhanced and more easily accessible benefits for the seriously disabled”. There was more.

“[He] Said the paper would include automatic enhanced benefit qualification for a long list of disabilities including AIDS MS RA MND etc … I am angry that he made me vote for something I did not want to vote for, bribing me with a promise and now HE resigns”. Duncan Cough was prone to talking well, but lying badly. Who knew?

One thing is for sure: Cameron has left Duncan Cough in no doubt that his political career has now ended. It couldn’t happen to a more deserving politician.
Posted by Tim Fenton at 10:30

Except, of course, for the disabled victims on the end of this cowardice organised by Bullingdon boot boys and neocon thugs in the civil service. Do not underestimate the latter's responsibility in all this, particularly the "first division" Oxbridge crew.

Even funnier is the Bullingdon head boy's and dead face Osborne's "puzzlement."

Rats fighting in the tory sewer.

Sooner or later pensioners and children will be attacked too. It's what tory Nastzis do.

And it's what disgusting hypocritical thieves like Frank Field do. I've just watched him on BBC News making excuses for all the tory thievery. A truly horrible man with not a trace of humanity in him, a far right plant of the worst kind. The sooner he's out of the Labour Party and public life the better.

It could also be that UC is about to blow up in his face, in ways over and above the one you mentioned, and this is just the excuse he has been looking for to get out before that happened. Especially with the little problem with UC having a hidden cost of 24 billion a year in extra benefit payments.

No one seem to have accounted for the fact that 24 billion a year in benefits is not claimed, yet UC will pay all the benefits due automatically if any one part of it is claimed.... wooops!

In simple terms, if you apply for say - just "housing benefit" under UC the system will then work out all the other benefits you are entitled to; such as child benefit, wage top-ups and so on... at the moment you have to claim individually: child benefit, tax credits, housing benefit, council tax support, income support and the rest.

If you apply for child benefit under UC because you have just had a child, the system would then work out if you were entitled to any of the other UC benefits rolled in, such as tax credits, housing benefit, and so on. Prior to UC, you would have to claim each and every benefit one by one - assuming you even know its available; hence the 24 billion unclaimed.

What gets me, is that very few have noticed this issue... unless that is the reason for all the new and extra cuts being implemented within the UC system (such as the back door "tax credit" cuts) because someone has just realised the issue so the only way to keep the total "bill" the same is to slash and burn all the allowances so that when (stop laughing at the back) UC goes "fully live" the benefits bill doesn't shoot up over night.

At the moment none of the above is noticeable within the books, because the only people "allowed" to sign up to UC are single people newly unemployed with a few other case types caught because once on UC you can't get off it - even if the IT system doesn't work to cover the groups correctly. A total screw up, its not called "Universal Cockup" for nothing.

See https://speye.wordpress.com/2015/06/25/66-million-per-day-24-billion-per-yearin-welfare-goes-unclaimed/ for information (not my work)