A superbly fraudulent article has appeared on Mail Online, under the byline of Matt Dathan, telling readers “Revealed: The buildings across Westminster governed by Sharia law - including Admiralty House, once home to members of the Royal Family and Sea Lords”. Be frightened, everyone - the Scary Muslims (tm) are here! 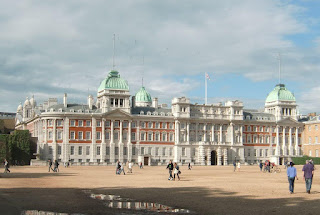 Owned by Islamic financiers. Governed by Sharia Law. Do go on. “Admiralty House is one of two more public buildings that are revealed today to operate under Islamic law following the revelations that government properties were quietly transferred to finance an Islamic bond scheme in 2014”. So quietly was this done that the gov.uk website put out a comprehensive article on the exercise at the time.

And that article, “Government issues first Islamic bond”, tells a rather different picture: “The government has today (25 June 2014) cemented Britain’s position as the western hub for Islamic finance by becoming the first country outside the Islamic world to issue sovereign Sukuk, the Islamic equivalent of a bond … The government confirmed that £200 million of Sukuk, maturing on 22 July 2019, have been sold to investors based in the UK and in the major hubs for Islamic finance around the world”. It’s a bond issue. But an Islamic one.

What does the issue involve? “Britain’s sovereign Sukuk uses the Al-Ijara structure, the most common structure for sovereign Sukuk, with rental payments on property providing the income for investors. The Sukuk is underpinned by three central government properties”. Rental payments on the buildings replace the conventional western device of interest, which is Riba, or forbidden, in Islam. That is all.

All the properties involved, including Admiralty House, which, Mail people, is at the north side of Horse Guards' Parade, not halfway up the Strand as your map claims, have had an alcohol ban imposed. Under English law. No Sharia Law was involved. And it gets worse: the Mail claims “The Treasury agreed to make the Sukuk fully compliant with the code of Islamic law”, but Sukuk IS compliant with Islamic law by definition.

This is a lamentably bad article, slanted to frighten the Mail’s readers. The reality is that the Government has identified a new market into which to sell its bonds and therefore raise money. The issue was oversubscribed by over ten times. There is clear scope to raise more money this way in the future. And the Mail whines about an alcohol ban.
Posted by Tim Fenton at 10:49

The interesting thing about Sharia financial law is that it makes the capital owner much more responsible. It's a very sensible way to do business. If it had been much more common 10-20 years ago we wouldn't have had ridiculous rises in house prices forcing people off the property ladder and that wouldn't have been followed by the crash. Many Daily Mail readers would be living in better homes with greater financial stability. But then again, they probably prefer to live hand to mouth in overpriced rented hovels if it lets them be nasty to non-white CofE people.

I don't suppose Admiralty House was anywhere near the top of the list of places that Lunchtime O'Booze and the gang would normally frequent.

Ooooooh watching the people get prayery
Not very pretty I tell thee
Walking through Luton quite scary
Not very sensible either....