As the Guardian has reported, betting has been suspended on the Sun’s non-bullying political editor Tom Newton Dunn becoming the next political editor of BBC Newsnight. While his getting a berth at the Beeb would confound all the right-leaning pundits who constantly claim that the Corporation is stuffed with rotten lefties, the question has rightly been asked as to whether this is the kind of person the BBC should be employing. 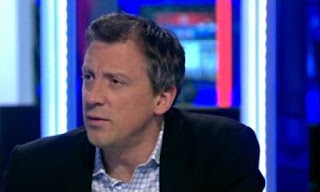 Warning to New Broadcasting House security: do not admit this man to the building

That he has been an eager taker of the Murdoch shilling is not the issue - it hasn’t stopped Andrew Neil carving a niche out for himself at the Corporation - but a combination of dodgy dealings in the past, recent suspicion of bigotry verging in Islamophobia, and behavioural issues which led to him being given a final warning by Sun management. Why Director General Lord Hall-Hall has not intervened is a mystery.

The dodgy dealings are typified by Paddy French’s Press Gang article where he describes Newton Dunn’s part in requesting a Criminal Records Check on a Tory PPC called Adrian Flook. That check would have needed someone to access the Police National Computer - illegally. The future Sun political editor was the contact for private investigator Steve Whittamore - the bloke who was busted in Operation Motorman.

Some might argue that is only one strike against Newton Dunn’s good name. But there is more - a lot more. His was the name on the by-line of the recent infamous “1 in 5 Muslims” Sun splash, which suggested that 20% of Brits who are followers of The Prophet were either in league with ISIS, or whatever they’re called this week, or sympathised with them. It was a seriously misleading story. But there was no retraction or apology.

Nihal Arthanayake wrote a piece for Vice News telling of the severely negative reaction towards British Muslims as a result of that article. Other Muslim groups have also reacted badly to the “1 in 5 Muslims” smear, and the Sun using the same technique to defend it - claiming it is an uncomfortable truth that had to be faced - as its Hillsborough coverage. How will the news be received that its author has been gifted a job at the BBC?

And there is yet more on top of that: even though his past dodgy dealings were well known, Newton Dunn was still ready to get righteous about Police powers being abused. He was exposed by Private Eye magazine bullying an unfortunate waitress in Moncrieff’s Bar at the Commons. He got the name of one of those Brits killed in a drone strike on ISIS wrong. He misreported the Met’s application to see his and other hacks’ phone records. And in January he had to resort to quoting a UKIP supporter to smear the NHS.

Then comes Newton Dunn’s final warning for bullying his then colleague Clodagh Hartley, which was uncovered in some style by Labour MP Tom Watson, to the Sun man’s clear embarrassment. So there are his three strikes, and he should therefore be out. The BBC, after all, has standards to maintain, and should not be employing such people.

Perhaps those in charge of the selection process would care to explain themselves.
Posted by Tim Fenton at 14:15

I think it seems fairly clear that if you are "one of us" (in the immortal words of the late Thatcher), you can do no wrong. Whatever your transgression, you're at best sent to the naughty step for a while before being quietly rehabilitated. Certainly seems the way not just in politics but the media too.