The Sun, its management and editorial staff are quick to point out, is not, repeat not, repeat NOT racist in any way, and does not condone bigotry or intolerance. Well, up to a point. What the paper does do is to slant its coverage in such a way as to misinform its readers to the point of turning them against the subjects of incessant and gratuitous negative coverage, with all too obvious consequences.

A postman who had been at work at 0430 hours one morning last June apparently dozed off at the wheel of his car while later driving home. The momentary loss of control, even at just 30mph, was enough to cause the vehicle to veer into a pedestrian standing in the road, who was strapping his youngest child into a seat in the family car. That man later died; the postman pleaded guilty to Death by Dangerous Driving.

Accidents happen. But this was not merely any postman, he was a Muslim. And the accident happened during Ramadan. Enter the Sun to tell readers “No jail for Muslim postie who killed dad of eight when he fell asleep at the wheel during Ramadan fast … Sajid Hussein fell asleep after fasting for over 10 hours for Muslim festival Ramadan”. The clear inference is that Muslims and Ramadan done it (the Mail’s effort is similar).

However, the prosecutor told “Mr Hussain had been fasting for Ramadan, but there was no abnormalities in his blood sugar levels and medics are quite satisfied that he had not had a stroke … The only conclusion is that he must have dozed off”. He had eaten at 0330 hours: the idea that ten hours without food would cause someone to be unfit to drive is not credible. But Sun readers had already made their minds up.

Their comments are as sickening as they are misinformed: “This is our justice system you can't change what we have preached so many times before there's one rule for us and another for them … At a glance it looks like once again the authorities and judges are running scared in case they look like racists - sad day for the UK!! … So? not eating for ten hours and murder is ok? That's the new defense? DERORT HIM! And outlaw anyone fasting who is in control of a vehicle!” And there is, sadly, more. 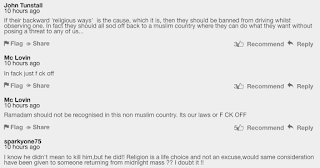 “If their backward 'religious ways' is the cause, which it is, then they should be banned from driving whilst observing one. In fact they should all sod off back to a muslim country where they can do what they want without posing a threat to any of us … Ramadam should not be recognised in this non muslim country. Its our laws or F CK OFF … I know he didn't mean to kill him,but he did!! Religion is a life choice and not an excuse,would same consideration have been given to someone returning from midnight mass?”

It’s all about “them” being different to, and being treated differently to, “us”. And it’s reinforced, deliberately and shamelessly, every day of every week by the newspaper on whose website all those comments have been posted - and allowed to stand.

So, Tony Gallagher and pals, rather than getting righteous over your paper’s shitty “journalism”, perhaps you’d like to explain how all these people become so badly misinformed. But you won’t. It’s someone else’s fault, and being an inmate of the Baby Shard bunker means never having to say you’re sorry. No change there, then.
Posted by Tim Fenton at 10:28

How long does one have to wait for an explosive strapped angered human to charge the Murdoch quartets?

The police could drag out any investigations for 30 years I suppose or solve it NEVER.

Maybe, the injured parties or loved ones could try asking intelligence for help.

The reply, if karma really is fair, should be something like...
No can do. You've been a law unto yourselves, we advise you just leave the country. In fact, we fucking insist!

The people to blame for this contemptible propaganda are all those who work at the Scum, no exceptions. They all know what a rotten to the core immoral rag it is. There can be no excuses.

But what else can you expect from Murdoch, MacKenzie, Gallagher, Newton Dunn, Kavanagh and all the other insect life? With "examples" like that media culture can go only one way, into its neocon gutter.

So why be surprised when former spiv Welby appears in a comical medieval outfit to justify "anger" at refugees. An obvious case of a money changer throwing Christ out of the temple.

Our national culture is currently in a dreadful place. And it's because those people and their apologists have lost any sense of conscience and honesty. These are dark days indeed.